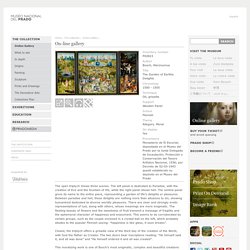 The left panel is dedicated to Paradise, with the creation of Eve and the fountain of life, while the right panel shows hell. The central panel gives its name to the entire piece, representing a garden of life’s delights or pleasures. Between paradise and hell, these delights are nothing more than allusions to sin, showing humankind dedicated to diverse worldly pleasures. There are clear and strongly erotic representations of lust, along with others, whose meanings are more enigmatic. Granada. In the 2005 national census, the population of the city of Granada proper was 236,982, and the population of the entire urban area was estimated to be 472,638, ranking as the 13th-largest urban area of Spain. 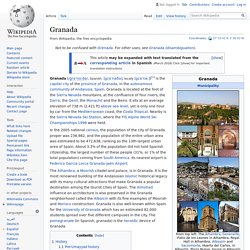 About 3.3% of the population did not hold Spanish citizenship, the largest number of these people (31%; or 1% of the total population) coming from South America. Its nearest airport is Federico García Lorca Granada-Jaén Airport. The Alhambra, a Moorish citadel and palace, is in Granada. It is the most renowned building of the Andalusian Islamic historical legacy with its many cultural attractions that make Granada a popular destination among the touristic cities of Spain. The Almohad influence on architecture is also preserved in the Granada neighborhood called the Albaicín with its fine examples of Moorish and Morisco construction. History of Granada[edit] Arco/puerta de Elvira in Granada Early history[edit] Founding[edit] Nasrid dynasty—Emirate of Granada[edit] Legacy[edit] Cathedral. Costa del Sol - Costa del Sol Beaches - Costa del Sol Hotels. Costa del Sol (which translates to "Sun Coast") is a popular destination in the autonomous community of Andalusia in southern Spain. 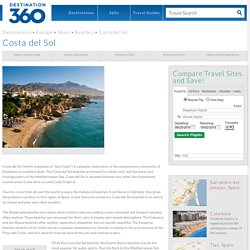 The Costa del Sol beaches are known for white sand, and the warm and inviting waters of the Mediterranean Sea. Costa del Sol is situated between two other, less frequented coastal areas, Costa de la Luz and Costa Tropical. Tourists come from all over the world to enjoy the Andalucia beaches, from Nerja to Gibraltar. One great thing about a vacation in this region of Spain, is that there are numerous Costa del Sol beaches from which to choose and plan your ideal vacation. The Sotogrande beaches are a place where visitors who are seeking a more secluded and tranquil vacation often explore. Vegan In Madrid. Thanks to HappyCow, it is always easy to find the best places anywhere to have a veggie meal. 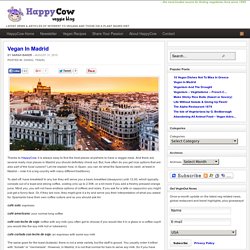 And there are several really nice places in Madrid you should definitely check out. But, how often do you get nice options that are also part of the local cuisine? Let me explain how, in Spain, you can do what the Spaniards do (well, at least in Madrid – note it is a big country with many different traditions). To start off: have breakfast! In any bar they will serve you a basic breakfast (desayuno) until 12.00, which typically consists out of a toast and strong coffee, costing only up to 2.50€, or a bit more if you add a freshly pressed orange juice. Café solo: espresso café americano: your normal long coffee café con leche de soja: coffee with soy milk (you often get to choose if you would like it in a glass or a coffee cup/if you would like the soy milk hot or lukewarm) cafe cortado con leche de soja: an espresso with some soy milk Dinner in Spain is not until late. 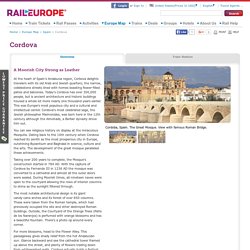 Today's Cordova has over 300,000 people, but is ancient architecture and historic buildings housed a whole lot more nearly one thousand years earlier. This was Europe's most populous city and a cultural and intellectual center. Cordova's most celebrated sage, the Jewish philosopher Maimonides, was born here in the 12th century although the Almohads, a Berber dynasty drove him out.

You can see religious history on display at the miraculous Mezquita. Dating back to the 10th century when Cordova reached its zenith as the most prosperous city in Europe, outshining Byzantium and Baghdad in science, culture and the arts. Taking over 200 years to complete, the Mosque's construction started in 784 AD. For more blossoms, head to the Flower Alley.