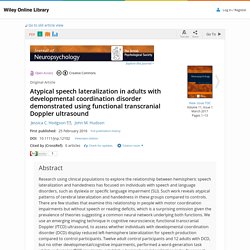 Such work reveals atypical patterns of cerebral lateralization and handedness in these groups compared to controls. There are few studies that examine this relationship in people with motor coordination impairments but without speech or reading deficits, which is a surprising omission given the prevalence of theories suggesting a common neural network underlying both functions. We use an emerging imaging technique in cognitive neuroscience; functional transcranial Doppler (fTCD) ultrasound, to assess whether individuals with developmental coordination disorder (DCD) display reduced left-hemisphere lateralization for speech production compared to control participants. Background Method and materials Participants Instruments Sample characterization. 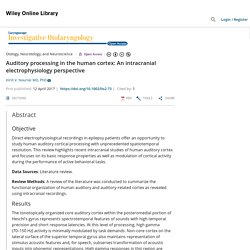 Abstract Objective To explore the possibility that autism, catatonia and psychoses in children are different manifestations of a single underlying form of brain pathology – a kind of ‘Iron Triangle’ of symptomatology – rather than three separate illnesses. 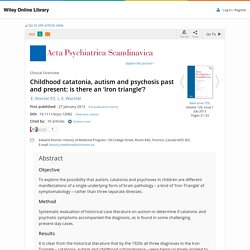 Method Systematic evaluation of historical case literature on autism to determine if catatonic and psychotic symptoms accompanied the diagnosis, as is found in some challenging present-day cases. Results It is clear from the historical literature that by the 1920s all three diagnoses in the Iron Triangle – catatonia, autism and childhood schizophrenia – were being routinely applied to children and adolescents. Conclusion. Cognitive hypothesis testing and response to intervention for children with reading problems. Cytoarchitectonic abnormalities in developmental dyslexia: A case study. Does Dyslexia Exist? Dyslexic brain activation abnormalities in deep and shallow orthographies: A meta-analysis of 28 functional neuroimaging studies. Dyslexia: a review of two theories. Deficit of the magnocellular (or transient) system It has been suggested that as many as 75 per cent of dyslexics have a defect in their main magnocellular pathway.19 Evidence in favour of a magnocellular association comes from several approaches. 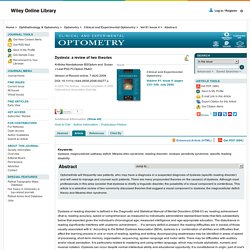 We shall review a few methods that have been used to study this association. Psychophysical studies have measured contrast sensitivity at different spatial and temporal frequencies.20–22 For example, if deficits are found in people with reading disabilities for high temporal and low spatial frequencies (but no deficit for low temporal and high spatial frequencies) this would be seen as showing a deficit in the magnocellular pathway.23,24 Other studies have used motion perception, speed matching or speed discrimination tasks,21,25,26 however, there is the question of internal consistency of measures of M pathway, that is, are measures of M-pathway function actually measuring the same function? 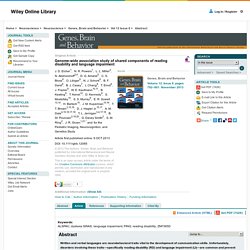 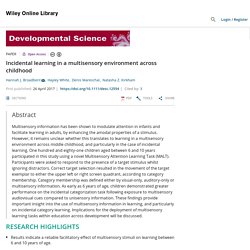 In order for an individual to make sense of the dynamic and cluttered environment, understanding that some cues signalled to more than one sense belong together, and being able to integrate information optimally from different sensory modalities whilst ignoring irrelevant information is imperative. Despite this, little is understood regarding age‐related changes in multisensory integration abilities, particularly within educational contexts, which would likely impact on our understanding of optimal learning conditions across development (Barutchu et al., 2011). Environmental stimuli experienced through more than one sensory system can sometimes be considered advantageous when the pooling of redundant amodal cues is used to reduce perceptual uncertainty (Ernst & Banks, 2002). To our knowledge, only a handful of studies have examined the effects of using multisensory information to support children's learning. 2.2 Stimuli.

In search of a science-based application: A learning tool for reading acquisition. Abstract This is a story about the fate of a psychological application: from its conception to the optimistic vision surrounding its future. 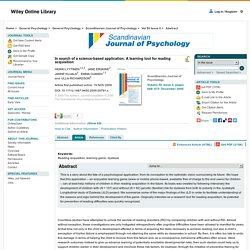 We hope that this application – an enjoyable learning game (www or mobile phone-based, available free of charge to the end users) for children – can at best help millions of children in their reading acquisition in the future. Its basis was created by following intensively the development of children with (N = 107) and without (N = 92) genetic (familial) risk for dyslexia from birth to puberty in the Jyväskylä Longitudinal study of Dyslexia (JLD)-project. We summarize some of the major findings of the JLD in order to facilitate understanding of the reasons and logic behind the development of the game.

Originally intended as a research tool for reading acquisition, its potential for prevention of reading difficulties was quickly recognized. Learning Words Via Reading: Contextual Diversity, Spacing, and Retrieval Effects in Adults - Pagán - 2019 - Cognitive Science. 1 Introduction Text provides a powerful substrate from which to learn new words. 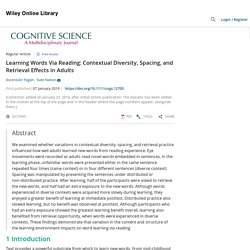 From mid‐childhood onward, people learn more words via reading than through conversations (e.g., Nagy, Herman, & Anderson, 1985), yet relatively little is known about the factors that influence word learning via reading in adults. Natural text is complex and varied, and the meaning of a new word is rarely explicit. This contrasts with the simplicity of memory paradigms that use recall or recognition to probe verbal learning, and the explicitness of tasks such as referent matching. 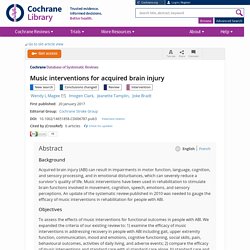 Mutation of Dcdc2 in mice leads to impairments in auditory processing and memory ability. Neural evidence for phonologically based language production deficits in older adults: An fMRI investigation of age-related differences in picture-word interference - Rizio - 2017 - Brain and Behavior. 1 Introduction Age-related declines in language production are a common and frustrating aspect of aging. 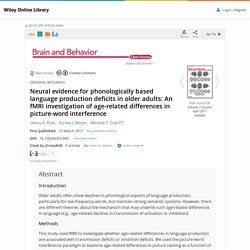 These declines include slower word retrieval (Mortensen, Meyer, & Humphreys, 2006), increased pauses in speech (Vousden & Maylor, 2006), and increased word retrieval failures, such as the tip-of-the-tongue phenomenon (Burke, Mackay, Worthley, & Wade, 1991). Older people who stutter: barriers to communication and perceptions of treatment needs. Parent implemented early intervention for young children with autism spectrum disorder: a systematic review. Phonics training for English-speaking poor readers. Background Around 5% of English speakers have a significant problem with learning to read words. Poor word readers are often trained to use letter-sound rules to improve their reading skills. This training is commonly called phonics. Well over 100 studies have administered some form of phonics training to poor word readers. However, there are surprisingly few systematic reviews or meta-analyses of these studies.

Objectives The primary aim of this review was to measure the effect that phonics training has on the literacy skills of English-speaking children, adolescents, and adults whose reading was at least one standard deviation (SD), one year, or one grade below the expected level, despite no reported problems that could explain their impaired ability to learn to read. Search methods Selection criteria. Practitioner Review: Social (pragmatic) communication disorder conceptualization, evidence and clinical implications - Norbury - 2013 - Journal of Child Psychology and Psychiatry.

Abstract Background DSM-5 sees the introduction of Social (Pragmatic) Communication Disorder (SPCD), characterized by persistent difficulties using verbal and nonverbal communication for social purposes, in the absence of restricted and repetitive interests and behaviours. There is currently much confusion about the precise diagnostic criteria for SPCD and how this disorder relates to autism spectrum disorders (ASD), previous descriptions of pragmatic language impairment (PLI) and more specific language disorders (LD).

Method Proposed criteria for SPCD are outlined. Results. Reading in the brain of children and adults: A meta-analysis of 40 functional magnetic resonance imaging studies. The selection of studies for the present coordinate-based meta-analysis was oriented on other meta-analyses in the domain of reading [Houdé et al., 2010; Richlan et al., 2009, 2011]. Studies were selected when they met the following criteria: (1) healthy human participants were investigated with fMRI, (2) tasks were reading or reading-related (e.g., rhyme judgments) with visual word, nonword, or letter string stimuli, (3) 3-D coordinates of a single contrast against a low-level baseline (fixation cross, rest, symbol, symbol strings, dots, or checkerboards) were reported in a standard stereotactic space (Talairach or MNI).

Furthermore, to increase homogeneity, the selection was restricted to studies in alphabetic writing systems. Sensory processing disorder: Any of a nurse practitioner's business? Simplifying Reading: Applying the Simplicity Principle to Reading - Vousden - 2010 - Cognitive Science. Specific language impairment: a convenient label for whom? Main text In a 21st-century world saturated with communication, it is a curious paradox that we tie ourselves up in knots when we try to explain children's communication difficulties. We need a clear and compelling descriptor that children and young people, their families, practitioners and the wider world can understand and use. Children and young people we work with rarely, if ever, describe themselves as having SLI, SLCN or any of the labels we use to describe language difficulties.

Families have similar issues; in the words of a frustrated parent: ‘they say he has a speech/language “need” … it's more than just a “need” it's a real difficulty and disability for him’. As the leading children's communication charity in the UK, I CAN's mission is to raise awareness of the scale and impact of language difficulties.

Our view is that the spaghetti is not helping. Despite being generic, speech, language and communication needs (SLCN) as a label has served us well over the last decade. Speech-perception-in-noise deficits in dyslexia. Timing of phase‐amplitude coupling is essential for neuronal and functional maturation of audiovisual integration in adolescents - Ohki - - Brain and Behavior. Adolescence is a sensitive period in brain development. It has been well demonstrated that the adolescent brain shows dramatic changes in anatomical structures, such as white matter and gray matter (Gogtay et al., 2004; Paus, 2010), and also alterations in neurophysiological properties such as neural oscillations implemented with the balance of excitatory and inhibitory functions (Belelli et al., 2018; Brown, Herd, Belelli, & Lambert, 2015; Cho et al., 2015; Datta, Arion, & Lewis, 2015; Hashimoto et al., 2010; Vicini et al., 2001).

Neuronal oscillatory phenomena, such as cross‐frequency coupling (CFC) and intra‐frequency coupling (IFC), are key to elucidating the neuronal development in adolescents, as shown by a recent developmental cohort study (Cho et al., 2015). Variation in GRIN2B contributes to weak performance in verbal short-term memory in children with dyslexia.

Visual Learning and the Brain: Implications for Dyslexia. What are infant siblings teaching us about autism in infancy? What happens to children with PDD when they grow up? Prospective follow-up of 219 children from preschool age to mid-childhood. White matter alterations and tract lateralization in children with dyslexia and isolated spelling deficits - Banfi - - Human Brain Mapping. Cognitive models of reading (Coltheart, Rastle, Perry, Langdon, & Ziegler, 2001; Perry, Ziegler, & Zorzi, 2007) describe two main reading routes: The sublexical route, based on grapheme‐phoneme conversion rules for decoding unknown words and pseudowords and the lexical route, accessing the orthographic long‐term memory to read known regular or irregular words.

Against this theoretical background, a dual‐route model for structural white‐matter correlates of reading was suggested by Vandermosten, Boets, Wouters, and Ghesquière (2012), incorporating a dorsal phonological and a ventral orthographic pathway. Based on the anatomical location of the two routes, Vandermosten, Boets, Wouters, and Ghesquière (2012) hypothesized that the dorsal route might involve the arcuate fasciculus (AF) and the superior longitudinal fasciculus (SLF), while the ventral route might overlap with the inferior fronto‐occipital fasciculus (IFOF) and the inferior longitudinal fasciculus (ILF).