Proceedings of the National Academy of Sciences. Adults with dyslexia are impaired in categorizing speech and nonspeech sounds on the basis of temporal cues. Author Affiliations Edited* by Michael M. 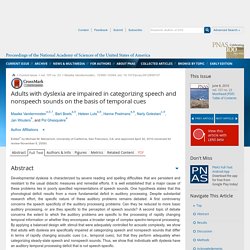 Merzenich, University of California, San Francisco, CA, and approved April 30, 2010 (received for review November 9, 2009) Abstract Developmental dyslexia is characterized by severe reading and spelling difficulties that are persistent and resistant to the usual didactic measures and remedial efforts. It is well established that a major cause of these problems lies in poorly specified representations of speech sounds. Speech contains a number of acoustic cues that are used to discriminate speech sounds belonging to different phonetic categories. Although previous speech perception studies predominantly indicate that individuals with dyslexia are less categorical than normal readers in the way that they perceive phonetic contrasts, especially stop consonants (7–28; but see 6, 29–32 for contra-evidence), these studies are inconclusive as to whether these problems are exclusive to speech. 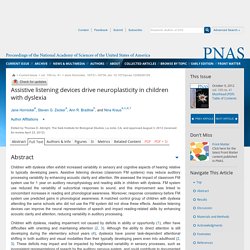 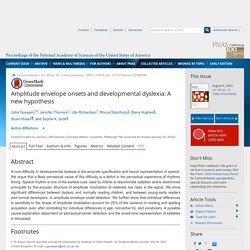 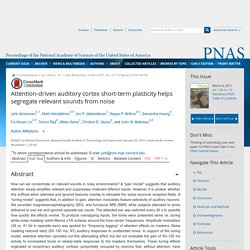 A “gain model” suggests that auditory attention simply amplifies relevant and suppresses irrelevant afferent inputs. However, it is unclear whether this suffices when attended and ignored features overlap to stimulate the same neuronal receptive fields. Humans have a remarkable capacity for auditory selective attention in noisy environments. These two classic theories have been recently complemented by results supporting a more detailed “tuning model” of auditory attention (14–18). Auditory plasticity and speech motor learning. Author Affiliations Edited by Michael M. 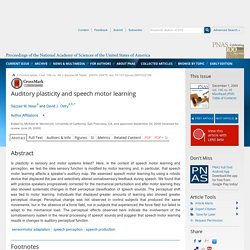 A structural–functional basis for dyslexia in the cortex of Chinese readers. Author Affiliations Communicated by Robert Desimone, Massachusetts Institute of Technology, Cambridge, MA, February 25, 2008 (received for review January 1, 2008) Abstract Developmental dyslexia is a neurobiologically based disorder that affects ≈5–17% of school children and is characterized by a severe impairment in reading skill acquisition. 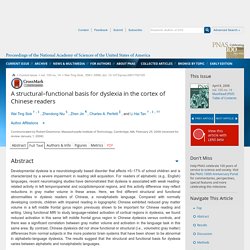 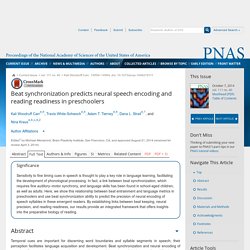 Brain sensitivity to print emerges when children learn letter–speech sound correspondences. Author Affiliations Edited by Michael Posner, University of Oregon, Eugene, OR, and approved March 5, 2010 (received for review April 21, 2009) A correction has been published Abstract The acquisition of reading skills is a major landmark process in a human's cognitive development. 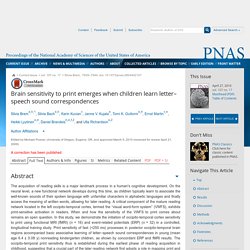 On the neural level, a new functional network develops during this time, as children typically learn to associate the well-known sounds of their spoken language with unfamiliar characters in alphabetic languages and finally access the meaning of written words, allowing for later reading. Learning to read starts with the establishment of grapheme–phoneme correspondences between letters and speech sounds in alphabetic languages such as German or English. Left occipito-temporal cortex regions, referred to as the “visual word-form system” (VWFS) (2), are often engaged in print processing. Table 1. Characteristics of training groups Fig. 1. Results Behavior. Training intensity. Components of verbal working memory: Evidence from neuroimaging. 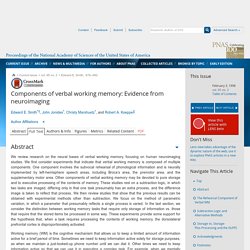 We first consider experiments that indicate that verbal working memory is composed of multiple components. One component involves the subvocal rehearsal of phonological information and is neurally implemented by left-hemisphere speech areas, including Broca’s area, the premotor area, and the supplementary motor area. Dysfunction of the auditory thalamus in developmental dyslexia. Author Affiliations Edited by Michael Merzenich, W. 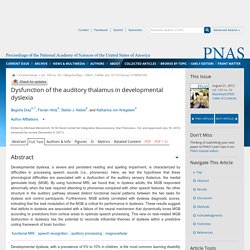 M. Educational neuroscience: The early years. As developmental cognitive neuroscience explores mechanisms of change at the cognitive and neural systems level, a focus is beginning to emerge on the role of educational experiences in shaping the specific functional circuits that give rise to complex cognitive skills such as reading or math. Such studies mark the emergence of educational neuroscience. This interdisciplinary field tackles questions that stretch beyond the normal boundaries of what neuroscience or education research alone can address. Evidence for aberrant auditory anatomy in developmental dyslexia. Evolution of working memory. The nature of human working memory (WM) has been extensively investigated, with thousands of articles and books on the topic produced over the last half-century. Some of the main findings of this research will be outlined shortly.

However, we know hardly anything about how WM evolved. For that (if we are to go beyond plausible speculation), we need detailed comparative studies. However, remarkably few such studies have been conducted, as we will see. Nevertheless, the emerging consensus about the nature of human WM allows us to frame a series of questions or alternative hypotheses concerning the possible differences between human and animal WM. Human brain evolution: From gene discovery to phenotype discovery. Todd M. Preuss1 Author Affiliations Edited by Francisco J. Intracranial dissection of word reading mechanisms. Laurent Cohena,b,c,d,e,1. Mechanisms and streams for processing of “what” and “where” in auditory cortex. Abstract The functional specialization and hierarchical organization of multiple areas in rhesus monkey auditory cortex were examined with various types of complex sounds.

Neurons in the lateral belt areas of the superior temporal gyrus were tuned to the best center frequency and bandwidth of band-passed noise bursts. They were also selective for the rate and direction of linear frequency modulated sweeps. Many neurons showed a preference for a limited number of species-specific vocalizations (“monkey calls”). These response selectivities can be explained by nonlinear spectral and temporal integration mechanisms. Musicians have enhanced subcortical auditory and audiovisual processing of speech and music. Neural correlates of the episodic encoding of pictures and words. Neural deficits in children with dyslexia ameliorated by behavioral remediation: Evidence from functional MRI.