Register to find Telecommuting, Freelance, and Part-Time Professional Jobs. The Pentagram and It’s Many Meanings! – Between The Pillars. The Pentagram. 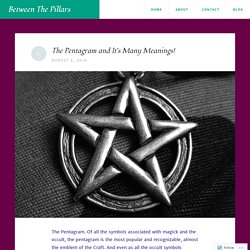 Of all the symbols associated with magick and the occult, the pentagram is the most popular and recognizable, almost the emblem of the Craft. And even as all the occult symbols infiltrated and found a place in the mundane world, the pentagram was above all else, as it is the common symbol for stars, as well as for stardom. Tetahatia: Armadel Invocation – Between The Pillars. The Grimoire Of Armadel. 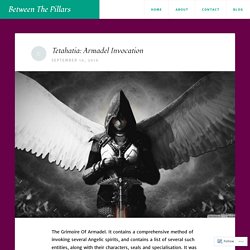 It contains a comprehensive method of invoking several Angelic spirits, and contains a list of several such entities, along with their characters, seals and specialisation. It was this method that I had used for my invocation of Archangel Samael (I have also realised that it’s spelled Armadel, not Almadel, as I kept saying previously) Of course, the invocation itself is quite old, and I had performed it when I was still very new. Fandom powered by Wikia. NEWS FLASH: Intermittens 11: In the Beginning, just came out in October 2016! 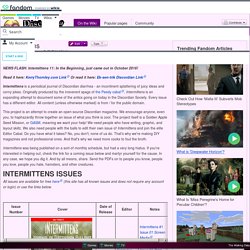 Read it here: KerryThornley.com LinkOr read it here: Ek-sen-trik Discordian Link Intermittens is a periodical journal of Discordian diarrhea - an incontinent splattering of juicy ideas and corny jokes. Originally produced by the irreverent spags of the Peedy cabal, Intermittens is an expanding attempt to document some of the antics going on today in the Discordian Society. Every issue has a different editor. Secret Transmissions: Norse Myth, Initiation & The Seed of Yggdrasil with Maria Kvilhaug. Due to the amazing breadth of content covered in the following conversation, an introduction will be kept brief. 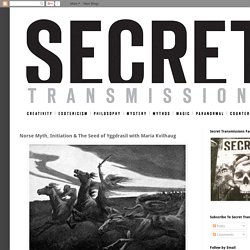 It was with great excitement that I discovered an incredibly informative YouTube channel by an author of Norse mythology, Maria Kvilhaug. I highly recommend her videos and books to anyone with a specific interest in Norse mythology studies or a general interest in esotericism or ancient ritual and initiation. As you will read, Kvilhaug brings together the strenuousness of academia with emotional passion and creativity in order to bring the timeless parables and lessons of Scandinavia to a modern audience. The depth and clarity of her knowledge and understanding is truly inspiring and exciting and I thank her for sharing her wisdom with us.

Be sure to check out all her social media and book links at the bottom. Why Your Magick Seems to be Failing – Between The Pillars. Magick, like all other fields pursued by humanity, requires dedication, practice, study and commitment. 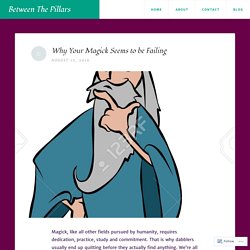 That is why dabblers usually end up quitting before they actually find anything. We’re all familiar with the former “occultists” who tried out the occult for something very simple like money or love, didn’t actually bother learning anything, and eventually quit because it either didn’t work because they didn’t put any effort into it, or they did put effort into it but didn’t know what they were doing and screwed themselves. Then there’s the average atheist who did a ritual once, just so he could boast about how it did not work and shut out spirituality entirely. The dead are gods, too – Polytheist.com. To the modern eye, one of the most controversial features of ancient Roman polytheism – if not the most controversial – is the imperial cult. 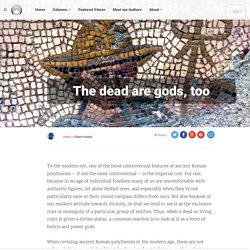 For one, because in an age of individual freedom many of us are uncomfortable with authority figures, let alone deified ones, and especially when they’re not particularly sane or their moral compass differs from ours. But also because of our modern attitude towards divinity, in that we tend to see it as the exclusive trait or monopoly of a particular group of entities. Got Problems? – What Use is Your Magick? Greetings Faithful Readers! 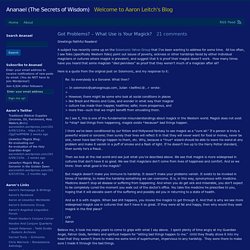 A subject has recently come up on the Solomonic Yahoo Group that I’ve been wanting to address for some time. All too often, I see folks (specifically Western folks) point out issues of poverty, sickness or other hardships faced by either individual magicians or cultures where magick is prevalent, and suggest that it is proof their magick doesn’t work. How many times have you heard that some magician “died penniless” as proof that they weren’t much of a magician after all? Bringing the gods to mind: on visualisation – I « enfolding.org. Posted by Phil Hine in tantra | September 20th 2016 | About poster: Phil Hine closeAuthor: Phil Hine Name: Name: Phil Hine Site: Phil Hine practices a hybrised approach to tantra. 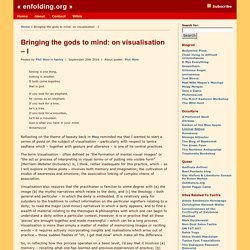 He is an occasional author and lecturer; and is the author of Prime Chaos, Condensed Chaos and The PseudonomiconSee Authors Posts (214) Seeing is one thing, looking is another. Sorcerous Saints and Elevated Ancestors ~ The Starry Cave. Over the last months I have noticed an increase in resentments concerning the use of saints in sorcerous contexts and in particular within cults and faiths of African pedigree. 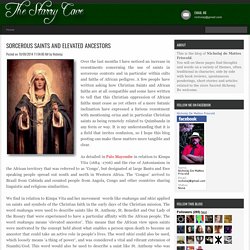 A few people have written asking how Christian Saints and African faiths are at all compatible and some have written to tell that this Christian oppression of African faiths must cease as yet others of a more Satanic inclination have expressed a furious resentment with mentioning orixa and in particular Christian saints as being remotely related to Quimbanda in any form or way. It is my understanding that it is a field that invites confusion, so I hope this blog posting can make these matters more tangible and clear.

As detailed in Palo Mayombe in relation to Kimpa Vita (1684 -1706) and the rise of Antonianism in the African territory that was referred to as ‘Congo’, but designated at large Bantu and Ewe speaking people spread out south and north in Western Africa.