Fable. Once upon a time, there was a man whose therapist thought it would be a good idea for the man to work through some stuff by telling a story about that stuff. 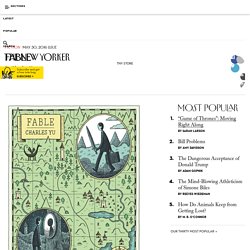 The man lived in a one-bedroom efficiency cottage all by himself, in a sort of dicey part of town. One day, the man woke up and realized that this was pretty much it for him. It wasn’t terrible. But it wasn’t great, either. Fable. The Wyrd of the Early Earth: Cellular Pre-sense in the Primordial Soup @ The Nightshirt. Stand brave, life-liver, bleeding out your days in the river of time. 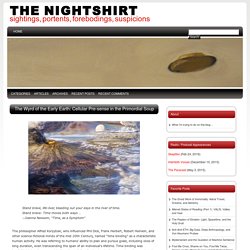 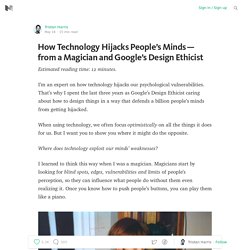 I’m an expert on how technology hijacks our psychological vulnerabilities. KingInJello comments on CMV:Strange women lying in ponds distributing swords is no basis for a system of government. Submit a CMV post Read popular topics Search CMV What is /r/changemyview? 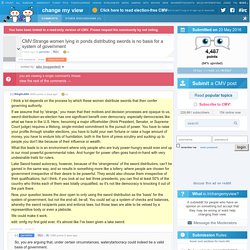 A subreddit for people who have an opinion on something but accept that they may be wrong or want help changing their view. Lucifer's Technologies: Interlude- The Innovation Ring. We are surrounded by technology of a kind that our great-grandparents could barely have conceived of. 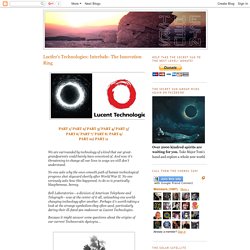 And now it's threatening to change all our lives in ways we still don't understand. No one asks why the once-smooth path of human technological progress shot skyward shortly after World War II. The Secret Sun: Lucifer's Technologies: The Invisible Man. Some skeptics believed that he was using micro-miniaturized radio devices with his psychics (like Geller) to feed information and answers to questions such as those Swan seemed able to answer. 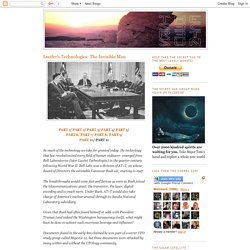 However, there's no evidence that such technology actually existed in the early 50s. Given that Frances Swan would eventually be filed in the crank folder, one can't help but wonder at the coincidence. Was the Admiral using Swan as a test case for secret technology-- two-way micro-miniaturized communication devices-- equipment so advanced it wouldn't see the light of day for decades after? SECRETS OF THE SEX MAGIC SPACE LAMAS REVEALED! TIBETAN BUDDHIST ALIENS AND RELIGIOUS SYNCRETISM.

This was probably my favourite of the four October essays to write, probably because it involved so many things that I love to think and talk about, but was also something I never, ever imagined I’d be writing for an anthropological audience, or maybe at all. 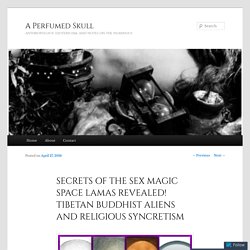 Years ago I was warned by a lovely acting HoD in an anthropology department to be careful of pursuing the study of esotericism – her exact words, more specifically, were ‘don’t ghettocize yourself’. One thing I’ve tried (and granted not always succeeded) at doing is to show how the esoteric, occult or ‘hidden’, as inaccessible and interior as they may seem, are still always and already social phenomena. The anthropology of extra-terrestrialism, ufology, and speculative futures is a small but growing field, and a lot of really great material has come out recently, and is currently being developed in this area. Anyway, here’s the piece. Like this: [Spell]Binding/Pushing Away Negative People. NOTE: This is not a curse, but a banishing spell. 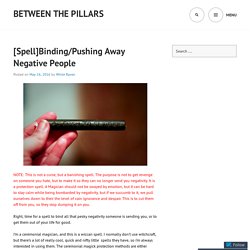 The purpose is not to get revenge on someone you hate, but to make it so they can no longer send you negativity. It is a protection spell. Enlightenment is Progress, not Perfection. Was walking on the boardwalk this weekend and came across this nugget as I looked down. 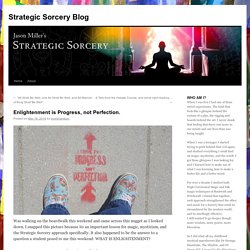 I snapped this picture because its an important lesson for magic, mysticism, and the Strategic Sorcery approach specifically. It also happened to be the answer to a question a student posed to me this weekend: WHAT IS ENLIGHTENMENT? What is Enlightenment? I can tell you what different traditions define their final goal as: liberation from karma, absorption in God, dissolution of the ego, Moksha, Rigpa, etc. To be honest though I don’t really believe or even care any of that anymore. Justin B the Magician — The Bornless or headless Rite! Get a really good... A Headless Ritual template. Ever since Gordon published a version of The Headless Rite in his excellent book The Chaos Protocols, I’ve noticed an uptick in interest in the ritual, including quite a few people who were intrigued enough to begin performing it. 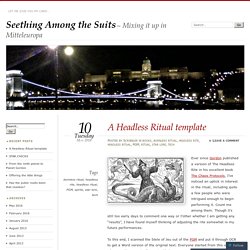 Count me among them. Though it’s still too early days to comment one way or t’other whether I am getting any “results”, I have found myself thinking of adjusting the rite somewhat in my future performances. To this end, I scanned the Stele of Jeu out of the PGM and put it through OCR to get a Word version of the original text. Everyone started from this version, wherever they eventually went with it. Since I reckon I’m not the only person considering adjustments to the basic rite, I figured I’d make this template available to people. Transcendent Discordianism - The Advanced Ape. The Principia Discordia [PD] lends itself perfectly to obfuscation and prankster ambiguity.

For this reason Discordianism has come to mean as many things as there are Discordians. Yet despite this obscurantism I believe that there is an actual point to the teachings passed down to us by Kerry Thornley, Greg Hill, Robert Anton Wilson and others, that there is a core message that stands out among the parody, humor and cunning self-effacement of those original teachings. Read: How Social Network Users Miss the Point of Discordianism The most troubling interpretation of Discordianism in its modern context is the tendency to view it only as a parody, and to not only reject it as a religion, but to use it as a justification for the rejection of religion in general.

The Internet Really Has Changed Everything. Here’s the Proof. — Backchannel. Bizarre fourth state of water discovered. You already know that water can have three states of matter: solid, liquid and gas. But scientists at the Oak Ridge National Lab (ORNL) have discovered that when it's put under extreme pressure in small spaces, the life-giving liquid can exhibit a strange fourth state known as tunneling. The water under question was found in super-small six-sided channels in the mineral beryl, which forms the basis for the gems aquamarine and emerald.

The channels measure only about five atoms across and function basically as cages that can each trap one water molecule. Critiquing the Future with Bruce Sterling. Bruce Sterling, one of the first cyberpunk authors to receive mainstream attention, is no stranger to radical tech. With titles ranging from The Hacker Crackdown to The Difference Engine to Schismatrix to Distraction, his pertinent social commentary and visionary ideas have remained influential to this day. His critically acclaimed work has won several Hugo Awards. When I saw that he was following us on Twitter, I knew that I had to ask him for an interview. Rachel Haywire: Throughout your various writings, you have made some predictions that have turned out to be true, both on the Internet and in the flesh. Do you think you are able to foresee the future, or do you have more of a knack for predicting trends based on present experiences?

Top Neuroscientist Explains How Big Pharma’s Adderall Is Essentially Crystal Meth. Anyone who’s ever been given one of their friend’s Adderall knows the powerful effects brought on by this tiny unintimidating pink pill. Increased energy, enhanced ability to focus and concentrate, and a euphoric sense of being are the most common effects of this drug.

Coincidentally, increased energy, enhanced ability to focus and concentrate, and a euphoric sense of being — are also the most common effects of crystal meth. So, why are these effects so similar? Because the drugs are nearly identical in their chemical structure. Dr. Transit of Mercury - In a rare event, which only occurs a few times a century, the innermost planet of the Solar System will soon find its orbit crossing directly between the Earth and the Sun, as Mercury transits our home star on May 9, 2016. During the event, Mercury will slowly move across our field of view, a small black dot across our Sun’s brilliantly bright face, a celestial show that will last seven hours, and which will be visible wherever the sun is shining. Transits of Mercury occur only 13 or 14 times in a century, usually in either May or November.

The last transit was in 2006. In the ancient cultures of Greece and Rome, Mercury (or Hermes) was the messenger of the gods, flying across the realms at lightning speed with his winged sandals. It is fitting that the planet closest to our Sun would share its name with the swift-footed god, since Mercury travels around the Sun faster than any other planet. The Psychedelic Book of the Dead - Techgnosis.