Here's 4 Classic Robert Anton Wilson Reality Hacks. What Trump’s Game of Missile Command Means for Syria. I know I wasn’t the only one that nearly shit themselves when they heard that 59 thomahawk missiles launched from two American destroyers had slammed into Syrian territory. 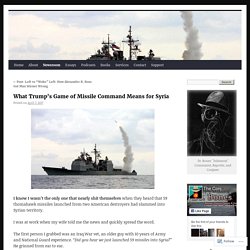 I was at work when my wife told me the news and quickly spread the word. The first person I grabbed was an Iraq War vet, an older guy with 10 years of Army and National Guard experience. “Did you hear we just launched 59 missiles into Syria?” He grinned from ear to ear. Culture - The obscure religion that shaped the West. Talk of ‘us’ and ‘them’ has long dominated Iran-related politics in the West. 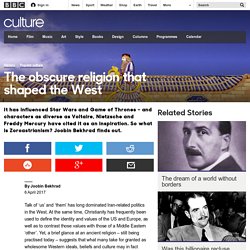 At the same time, Christianity has frequently been used to define the identity and values of the US and Europe, as well as to contrast those values with those of a Middle Eastern ‘other’. Yet, a brief glance at an ancient religion – still being practised today – suggests that what many take for granted as wholesome Western ideals, beliefs and culture may in fact have Iranian roots. Even the idea of Satan is a fundamentally Zoroastrian one It is generally believed by scholars that the ancient Iranian prophet Zarathustra (known in Persian as Zartosht and Greek as Zoroaster) lived sometime between 1500 and 1000 BC.

CHAOS MAGICK and CATHOLICISM – Adventures in Woo Woo. Over the last while I have noticed in some Chaos Magick circles I frequent that there has been a pretty big return of Catholic ideas to the table. 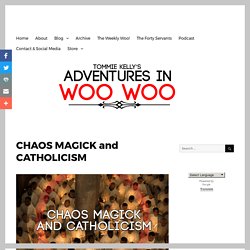 What Happens When an Archaeologist Challenges Mainstream Scientific Thinking? This article is from Hakai Magazine, an online publication about science and society in coastal ecosystems. 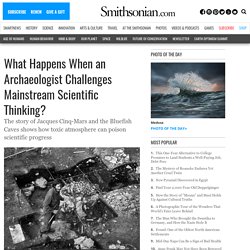 Read more stories like this at hakaimagazine.com. What I remember most about Jacques Cinq-Mars the first time we met was his manner—one part defiance, one part wariness. It was 1994, and I had just flown into the small village of Old Crow in northern Yukon; Cinq-Mars was waiting in the tiny airport. Tall, grizzled, and unshaven, the French-Canadian archaeologist looked every bit the old Yukon hand. Still fit in his early 50s, he worked as a curator at what is now called the Canadian Museum of History in Gatineau, Quebec. Bluefish Caves directly challenged mainstream scientific thinking. Cinq-Mars, however, didn’t buy that story—not a bit. A Radical New Therapy Could Treat the 'Untreatable' Victims of Trauma. At the turn of the millennium, a young woman moved to a cabin on the Mull of Kintyre, a headland in southwest Scotland renowned for the bleak beauty of its cliffs and the treacherous swirl of the currents below. 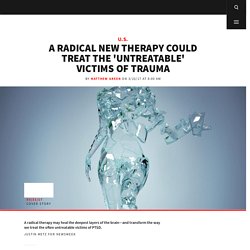 There she took in two horses, and for a time the silent companionship of those geldings offered more in the way of healing than the countless prescriptions she’d been given by psychiatrists, or the well-meaning attempts by therapists to excavate the most painful parts of her past. Then, in early 2013, she did something she had promised herself she would never do again: She bought a bottle of vodka. The woman, who asked to be identified only as Karen, cannot recall the precise trigger that made her reach for a drink after 12 years of sobriety. 4/6/17 Philip Giraldi says IC-Military Doubt Assad Gas Narrative - The Libertarian Institute. Philip Giraldi, former CIA officer and Director of the Council for the National Interest, says that “military and intelligence personnel,” “intimately familiar” with the intelligence, say that the narrative that Assad or Russia did it is a “sham,” instead endorsing the Russian narrative that Assad’s forces had bombed a storage facility. 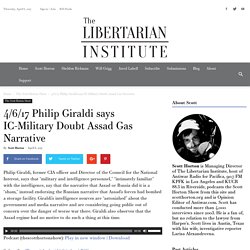 Giraldi’s intelligence sources are “astonished” about the government and media narrative and are considering going public out of concern over the danger of worse war there. Giraldi also observes that the Assad regime had no motive to do such a thing at this time. Podcast (thescotthortonshow): Play in new window | Download. A Guide To Sigil Magick – Sermons to the Unborn. North America's great carbon ocean: Protecting prairie grasslands keeps carbon in the soil and slows the pace of climate change. By John H. 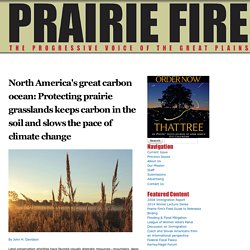 Davidson Land conservation priorities have favored visually dramatic resources—mountains, lakes, forests and shores. As a result, we enjoy national seashores, public forests and parks in every mountain range, along with an industry-sized effort built around protecting rainforests. These conservation achievements have, however, overshadowed a more visually humble but no less vital resource in meeting the challenge of global climate change: grasslands of the North American prairie.

Why prairies matter and lawns don’t – The Roaming Ecologist. Prairies – those critically endangered and complex ecosystems understood by few and misunderstood and destroyed by millions of people. 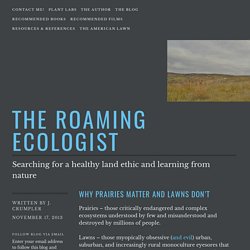 Lawns – those myopically obsessive (and evil) urban, suburban, and increasingly rural monoculture eyesores that displace native ecosystems at a rate between 5,000 and 385,000 acres per day* in favor of sterile, chemically-filled, artificial environments bloated with a tremendous European influence that provide no benefits over the long term; no food, no clean water, no wildlife habitat, and no foundation for preserving our once rich natural heritage. Cincinnati Curiosities — 1917: Cincinnati Learns To Hate Anything German. Looking for Lawns : Feature Articles.