AstrologyZone. Mercury Retrograde and What it Means for You By Susan Miller You may have heard friends say, "Oh, no - Mercury is about to retrograde again! 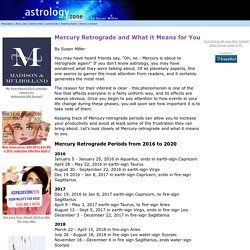 " If you don't know astrology, you may have wondered what they were talking about. Of all planetary aspects, this one seems to garner the most attention from readers, and it certainly generates the most mail. The reason for their interest is clear - this phenomenon is one of the few that affects everyone in a fairly uniform way, and its effects are always obvious. Keeping track of Mercury retrograde periods can allow you to increase your productivity and avoid at least some of the frustration they can bring about. Charles hugh smith-Weblog and Essays. 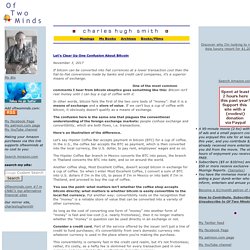 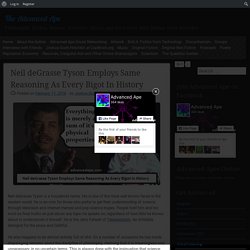 His is one of the most well known faces in the western world. He is an icon for those who prefer to get their understanding of science through television and internet memes and pop science tropes. People hold him and his word as final truths on just about any topic he speaks on, regardless of how little he knows about or understands it himself. He is the Jerry Falwell of Telescientism. The Leftist Origins of White Nationalism. As a white man, I call upon people to reject both white nationalism and academic anti-white rhetoric. 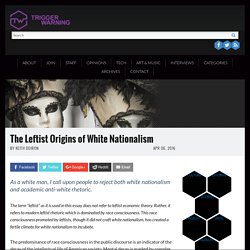 The term “leftist” as it is used in this essay does not refer to leftist economic theory. Rather, it refers to modern leftist rhetoric which is dominated by race consciousness. How Social Network Users Miss the Point of Discordianism. The Leftist Origins of White Nationalism. The Archdruid Report: The End of Ordinary Politics. Archdruids may take vacations but politics never sleeps, and during the month that’s elapsed since the last post here on The Archdruid Report, quite a number of things relevant to this blog’s project have gone spinning past the startled eyes of those who pay attention to the US political scene. 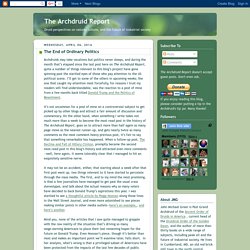 I’ll get to some of the others in upcoming weeks; the one that caught my attention most forcefully, for reasons I trust my readers will find understandable, was the reaction to a post of mine from a few months back titled Donald Trump and the Politics of Resentment. Trigger Warning - Why Have Opinions? I just surprised some people here at a conference by saying that I don’t have opinions on abortion or gun control. 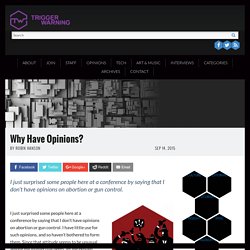 I just surprised some people here at a conference by saying that I don’t have opinions on abortion or gun control. I have little use for such opinions, and so haven’t bothered to form them. Since that attitude seems to be unusual among my intellectual peers, let me explain myself. I see four main kinds of reasons to have opinions on subjects: Decisions – Sometimes I need to make concrete decisions where the best choice depends on particular key facts or values. Most topics that are appropriate for research have little in the way of personal decision impact. Inside Erik Prince’s Treacherous Drive to Build a Private Air Force. ON A CRISP SATURDAY in November 2014, a black Mercedes SUV pulled onto the tarmac of an Austrian specialty aviation company 30 miles south of Vienna. 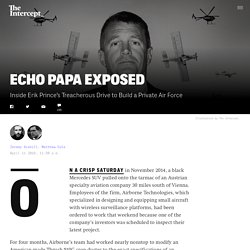 Employees of the firm, Airborne Technologies, which specialized in designing and equipping small aircraft with wireless surveillance platforms, had been ordered to work that weekend because one of the company’s investors was scheduled to inspect their latest project. For four months, Airborne’s team had worked nearly nonstop to modify an American-made Thrush 510G crop duster to the exact specifications of an unnamed client.

Late Roman glass kilns discovered at the foot of Mount Carmel – HeritageDaily. 323 Shares Share Tweet Email During the excavation, carried out as part of the Jezreel Valley Railway Project between Ha-‘Emekim Junction and Yagur Junction, remains of the oldest kilns in Israel were discovered where commercial quantities of raw glass were produced. 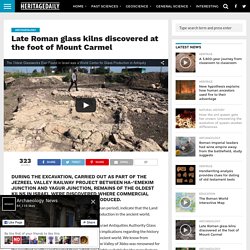 These kilns, c. 1,600 years old (dating to the Late Roman period), indicate that the Land of Israel was one of the foremost centers for glass production in the ancient world. According to Yael Gorin-Rosen, head curator of the Israel Antiquities Authority Glass Department, “This is a very important discovery with implications regarding the history of the glass industry both in Israel and in the entire ancient world. The excavation of the kilns has caused great excitement in recent weeks among glass researchers throughout the world, some of whom have come especially to Israel in order to see this discovery first hand. Additional Background Information: Vaneigem. The Manifesto of Ra-Hoor-Khuit. Theomagica - The Aggression Cycle.

Against Tradition: Anarchism in a Magical Context – GODS & RADICALS. It was a dream of fervent reality, of intense meaning, the kind of dream that inspires prophets and builds religions. 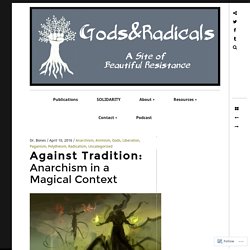 I could literally feel it interrupt the visions I had been having, as if someone had changed the channel my brain was viewing. Suddenly before me in a forest scene is a Caucasian woman dressed in brown clothing, simple yet complex in it’s unspoken elegance. Plain though her clothes may be, every cell in my body is screaming that this is no straightforward dream image, no mere human. An unknown aspect of my own dream body makes a startling proclamation: This is Hestia. Article_05. Articles: The Scole Experiments Introduction and Overviewby Rosalind Oliver Readers are reminded of the article 'Physical Mediumship: An Old Friend in New Clothes' by Professor David Fontana in LIGHT vol. 117 No.2, Autumn 1997, pp.25-30, which includes background information about Robin Foy, the psychical researcher under whose aegis the experimental work discussed in the present article took place. 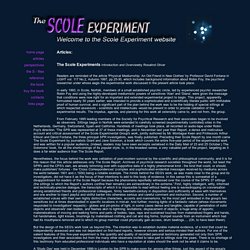 In early 1993, in Scole, Norfolk, members of a small established psychic circle, led by experienced psychic researcher Robin Foy and using the highly-developed mediumistic powers of sensitives 'Alan' and 'Diana', were given the message that conditions were now right for an important and extended experimental project to begin. Netherlands, Germany, Switzerland, Spain and California. Hundreds of meetings took place, all recorded on audio-tape under Robin Foy's direction. Copyright Campion Publishing Ltd. All rights reserved. Abduction and its Discontents: A (One Way) Extradimensional Exchange Mechanism. Truly Bizarre Cases Of Mass Vanishings. Throughout history there have been numerous cases of people who have simply ceased to exist, disappearing forever without explanation or resolution.

This is certainly spooky enough when it is just one person, but it becomes decidedly more bizarre when large groups of people abruptly vanish to never be seen again. Untitled. On March 17 delegates representing different ethnicities and nationalities–Kurds, Arabs, Assyrians, Syriacs, Turkomans, Armenians, Circassians and Chechen–along with representatives from the Syrian People’s Defense Units or YPG, and the YPJ womens’ defense units declared a formal Federation of Northern Syria which would incorporate 250 miles of mostly Kurdish-held territory along the Syria-Turkey border. On March 15, two days earlier, Russian President Putin surprised much of the world by announcing “Mission Accomplished” in Syria, ordering Russian jets and personnel to begin withdrawal. The two events are intimately connected. Combined and Conflicting Goals Both Russia’s beginning of withdrawal and the Kurds declaration of an autonomous federal region within Syria are linked, but not in the manner most western media report.

The Secret Sun: The Exegesis: Hardcore. Theomagica - Blog. Today I want to draw your attention to a wonderful blog-post series Gareth Knight has been constantly and quietly releasing since late in 2015. In a world that is awash with repetitive, unconnected snippets of information, hearing the voice of people who hold the actual genuine knowledge and giving them the time to tell a full story has become a rarity. Paul Krassner: I dropped acid with Groucho Marx. Gareth Knight News & Ideas. Strange magic: The story behind Auckland's Temple of Higher Thought.

Theomagica - Gareth Knight's Series 'SONS OF HERMES' Mr.Knight is offering fascinating detail and insights in exploring the historic nuances of the French occult scene of the early 1900s.