Embrace the detours on a Hermetic path. The Most Dangerous Philosopher in the World. The revelations about Russian involvement in the hacking of the Democratic Party officials, intending to vault Trump over Clinton, have added more fuel to an already-explosive and exhausting election cycle. 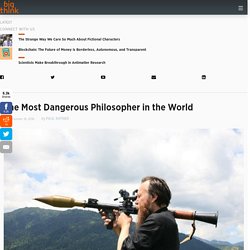 Why would Russia do this, especially as it's been revealed that Russian President Vladimir Putin was likely personally directing the operation? Enter Alexander Dugin, the political scientist known as “Putin’s Rasputin” or “Putin’s Brain”, as well as an occult fascist. He is also a sociology professor at the highly prestigious Moscow State University, a prolific writer, an advisor to key political and military figures and an articulator of a Kremlin-approved nationalist philosophy. Black magic on Red Square. This article is a preview from the Spring 2015 edition of New Humanist. 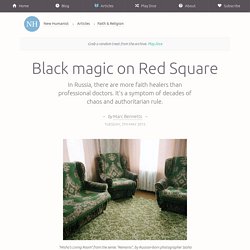 You can find out more and subscribe here. Building a Semantic, Mashable, Fully Decentralized Internet. Secret Transmissions: Confession of an Art Director: Occult Advertising Tech. The appeal of ceremonial magick and the occult works for me along two planks, or more aptly, two pillars. 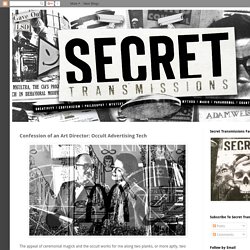 One the one hand it addresses my metaphysical yearnings and on the other it compliments my artistic or creative nature. As it happens, I had been practicing a form of magick long before I realized it as such. What the hell is wrong with America’s establishment liberals? Photo illustration by Slate. 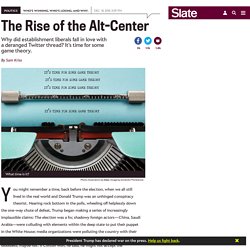 Image by bmelofo/Thinkstock. You might remember a time, back before the election, when we all still lived in the real world and Donald Trump was an unhinged conspiracy theorist. Nearing rock bottom in the polls, wheeling off helplessly down the one-way chute of defeat, Trump began making a series of increasingly implausible claims: The election was a fix; shadowy foreign actors—China, Saudi Arabia—were colluding with elements within the deep state to put their puppet in the White House; media organizations were polluting the country with their lies and distortions; the whole country was about to suffer a soft coup, maybe bloodless, maybe not. If Clinton won, he said, he might not accept the legitimacy of the result, and people were horrified by this suggestion. Every principle of representative democracy seemed under threat and all because one jumped-up narcissist and his limp, frothing coterie couldn’t deal with not getting everything they ever wanted.

21 Inspiring German Proverbs for German Learners. Do you feel like you’re not quite fluent yet? 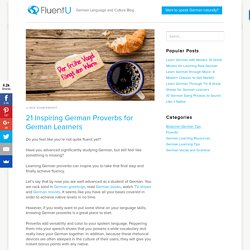 Have you advanced significantly studying German, but still feel like something is missing? Learning German proverbs can inspire you to take that final step and finally achieve fluency. Let’s say that by now you are well advanced as a student of German. You are rock solid in German greetings, read German books, watch TV shows and German movies. THE LAST TRUMP…HERE COMES DON THE FREAKIN’ BAPTIST AND THE MESSIAH’S SPACE SHIP. “In a flash”, said Paul to the Corinthians, “in a twinkling of an eye, at the last trump, the dead will rise and we will be changed…” While preparing for an interview with George Noory on “Coast to Coast am” on December 14, 2016 I heard two news stories that have blown my mind. 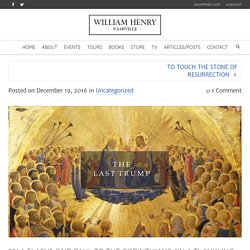 UPDATE (always noted in red): December 15, 2016 Evening News. There is an “elite” coup attempt underway against the U.S. 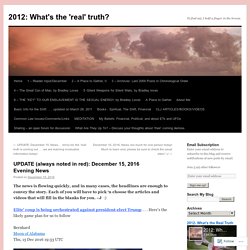 President-elect Trump.The coup is orchestrated by the camp of Hillary Clinton in association with the CIA and neoconservative powers in Congress.The plan is to use the CIA’s “Russia made Trump the winner” nonsense to swing the electoral college against him. The case would then be bumped up to Congress. Major neocon and warmonger parts of the Republicans could then move the presidency to Clinton or, if that fails, put Trump’s vice president-elect Mike Pence onto the throne. The regular bipartisan war business, which a Trump presidency threatens to interrupt, could continue.Should the coup succeed violent insurrections in the United States are likely to ensue with unpredictable consequences. The above theses are thus far only a general outline. 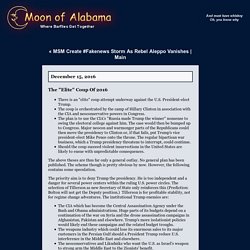 President-elect Trump.The coup is orchestrated by the camp of Hillary Clinton in association with the CIA and neoconservative powers in Congress.The plan is to use the CIA's "Russia made Trump the winner" nonsense to swing the electoral college against him. The case would then be bumped up to Congress. Major neocon and warmonger parts of the Republicans could then move the presidency to Clinton or, if that fails, put Trump's vice president-elect Mike Pence onto the throne. The regular bipartisan war business, which a Trump presidency threatens to interrupt, could continue.Should the coup succeed violent insurrections in the United States are likely to ensue with unpredictable consequences. The above theses are thus far only a general outlay. The Miracle of the Sun, 1917: Ancient Angels at Fatima? The Possible Common Origins of Star Gods. If the apparitions which are said to have been witnessed at Fatima in 1917 had taken place centuries earlier they might have been described as Fairy encounters or visions of spirits and demons. 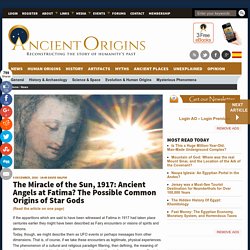 Today, though, we might describe them as UFO events or perhaps messages from other dimensions. That is, of course, if we take these encounters as legitimate, physical experiences. The phenomenon of a cultural and religious paradigm filtering, then defining, the meaning of anomalous events is a bias that is often purposeful and deliberate for many reasons. Adventures in Office Imaging: Is Marketing, Magick? While using the Google+ Sparks function a few days ago in search of articles using the keyword “esoteric” I stumbled upon a most peculiar and enlightening blog post… “The esoteric art of non-coercive persuasion — sometimes called advertising — evolved long before there was a Manhattan avenue named after our fourth president. 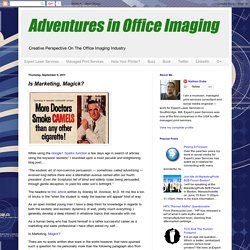 Cognitive science backs up the ancient Indian philosophy that we’re conscious even in deep sleep — Quartz. At the clinic of a popular veterinarian in New Delhi, all eyes were on Sunny, a Siberian husky. It was a warm day, but despite his obvious discomfort, Sunny did not mind the attention, human or canine. “It is rare for a foreign dog to feel comfortable in a large, hot city like Delhi,” said Pradeep Rana, checking Sunny’s hind-quarters. “They are not bred for this heat. But if necessary steps are taken, they can be happy here.” Inviting Mara to Tea - Tara Brach.

In Aleister & Adolf the reader is taken behind the scenes of the capitalist spectacle and inside the boardrooms where corporate-occult marketing departments employ fascist sigil magick developed by the Nazis during WWII in today’s advertising logos. A place where the war for men’s minds is waged with symbols and catchy slogans. It’s a fun smart read and you’ll be much smarter after you’ve read it, trust me. And Oeming’s crisp B&W artwork is perfectly suited for getting across some often difficult and tricky philosophical concepts. He’s a unique talent indeed. Rushkoff recently told AV Club: The "Elite" Coup Of 2016. Unverified Aleppo "On the Spot" Executions. December 14, 2016 (Tony Cartalucci - LD) - After a day of claiming up to 82 civilians were "shot on the spot" by Syrian forces battling to retake the northern city of Aleppo from armed terrorists who have occupied it since invading the city in 2012, no evidence or even the source of the claim has surfaced.

According to the BBC, the UN Human Rights office in Geneva received reports of the incident. Despite Western journalists having been on the ground in Aleppo, along with UN staff, the reports were actually received in Geneva from unnamed sources alleged to be in Aleppo, not acquired - or verified - on the ground by either the Western media or UN staff. The BBC, in its article, "Aleppo battle: UN says civilians shot on the spot," would admit (emphasis added): "Yesterday evening, we received further deeply disturbing reports that numerous bodies were lying on the streets," Mr Colville added, while admitting it was hard to verify the reports.

Other Lies Exposed He claims: He also states: Chaos Matrix. Russian tradition of the Knights Hospitaller - Wikipedia. 19th-Century Commander's Badge, Russian Grand Priory Origin[edit] Rhythm of breathing affects memory, fear: Breathing is not just for oxygen; it's also linked to brain function, behavior. Northwestern Medicine scientists have discovered for the first time that the rhythm of breathing creates electrical activity in the human brain that enhances emotional judgments and memory recall. These effects on behavior depend critically on whether you inhale or exhale and whether you breathe through the nose or mouth. Spaceflight modulates gene expression in the whole blood of astronauts : npj Microgravity. The Doom that Came to Chelsea. Alan Cabal Published Jun 10, 2003 at 6:01 am (Updated Nov 11, 2014) My ex-wife died back in March, after a long and heroic bout with cancer.