The Secret Sun: The REAL History of Saint Patrick's Day. Well, break out the corned beef and beer- it's time for the wearing of the green and the nation-wide Bacchanalia that marks the Spring Equinox. 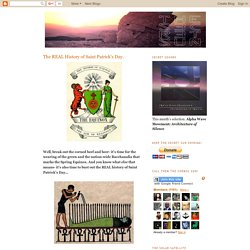 And you know what else that means- it's also time to bust out the REAL history of Saint Patrick's Day... March 17 is the day generally believed to be the death of St. Patrick, the British-born missionary who is credited with converting Ireland to Christianity. And as I wrote in one of my first posts on this blog: In Egyptian mythology, Osiris was killed on the 17th day of Athyr, the third month of the ancient calendar. 3/17 is also the date of a Masonically-created holiday, St. . • Osiris was believed to be the source of barley, which was used for brewing beer in Egypt.• It’s customary to wear green on St. Since then, I've been looking into the curious origin of this holiday and have found out some very interesting facts... • This one's a shocker- St. Their first meeting and dinner to honor St. . • Up until very recently, St. St. The TED Talks That Are Blatant Pseudoscientific Garbage.

Llewellyn Hinkes-Jones takes TED to task not for the kind of controversial TEDx talks that Graham Hancock and Rupert Sheldrake gave but for the mainstream TED, writing at The Awl: The long knives have been out for TED Talks for some time. 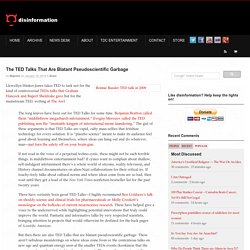 Benjamin Bratton called them “middlebrow megachurch infotainment.” Evegny Morozov called the TED publishing arm the “insatiable kingpin of international meme laundering.” The gist of these arguments is that TED Talks are vapid, culty mass-selfies that fetishize technology for every solution. It is “placebo science” meant to make its audience feel good about learning and themselves, where ideas can hang out and do whatever, man—just turn the safety off on your brain-gun.If not read in the voice of a perpetual techno-cynic, these might not be such terrible things.

Mogadonia - ‘Doing Easy’ . An essay by William S. Burroughs. 10 Easy Steps to Psychic Protection. When I stayed with friends recently, they took me to their local church. 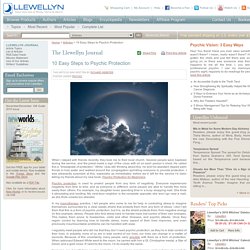 Several people were baptized during the service, and the priest made a sign of the cross with oil on each person’s chest. He called this a “breastplate of protection.” While I was still thinking about this, he and his assistant dipped palm fronds in holy water and walked around the congregation sprinkling everyone to provide protection. I was pleasantly surprised at this, especially as immediately before we’d left for the service I’d been telling my friends about my new book, Psychic Protection for Beginners. Psychic protection is used to protect people from any form of negativity. In my hypnotherapy practice, I tell people who come to me for help in controlling stress to imagine themselves surrounded by a clear plastic shield that protects them from any form of stress. I regularly meet people who tell me that they don’t need psychic protection, as they’re in total control of their lives. Starting Over.

I’ve met quite a few people who have been through years of spiritual ups and downs. 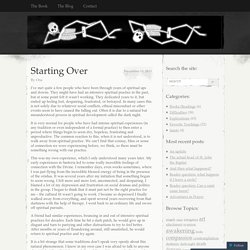 They might have had an intensive spiritual practice in the past, but at some point felt it wasn’t working. They dedicated years to it, but ended up feeling lost, despairing, frustrated, or betrayed. In many cases this is not solely due to whatever social conflicts, ethical misconduct or other events seem to have caused the falling out. Often it is due to a natural but misunderstood process in spiritual development called the dark night.

It is very normal for people who have had intense spiritual experiences (in any tradition or even independent of a formal practice) to then enter a period where things begin to seem dry, hopeless, frustrating and unproductive. This was my own experience, which I only understood many years later. A friend had similar experiences, bouncing in and out of intensive spiritual practices for decades. Like this: The Secret Montreal Experiments They Don't Want You To Know About. Doses of LSD given through an IV; drug-induced comas lasting two months; amnesia brought on by drugs psychological torture. 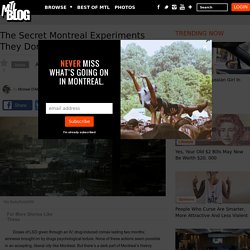 None of these actions seem possible in an accepting, liberal city like Montreal. But there’s a dark part of Montreal’s history everyone seems to forget, or simply not talk about, and all of these atrocities (and more) occurred in the heart of the city. During the late 1950s, Dr. Ewan Cameron was the director of the renowned Allen Memorial Institute, the Psychiatry Department of the Royal Victoria Hospital, part of the McGill University Health Centre. On the surface, Cameron was conducting esteemed academic research on the human mind for the benefit of his psychologically afflicted patients.

Those unlucky enough to be admitted to the Allen, within the Ravenscrag mansion, experienced something far more horrific. Commissioned by the CIA to create an effective brainwashing technique, with partial funding from the Canadian government, Dr. Evidence Mounts For A Real-Life Multiverse. "Are we alone? 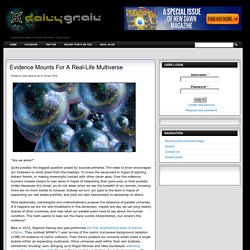 " Quite possibly the biggest question posed by eusocial primates.