Inspiration from the Darkness – the psychology of magick. As well as the theoretical material here at theblogofbaphomet we also like to include examples of practical esoteric technique. 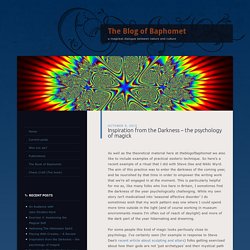 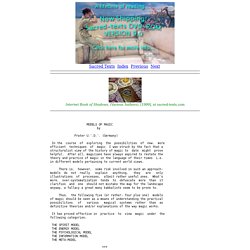 Blog. Probability Wave Tarot. (Before I start I’d like to make clear that while I slip into some physics jargon, I’m using it as a model, I don’t believe this actually works on the same principal as a probability wave, only that it makes a good illustration for what I’m discussing.) 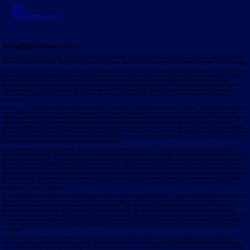 When I use the tarot I don’t believe I’m seeing the future, I might be, but I don’t believe in a predestined future. Reality and time are far too mutable for me to believe in a single outcome. The cards show me a probable future, generally the most probable future based on how events have transpired and have the potential to transpire. Potential does not equal predetermination; some events may not come to pass as other probable paths may be taken, especially if people involved have knowledge of what is shaping up, just as using the tarot allows. By knowing the way the probable future looks someone can begin to change it, either through an active or passive Will, making it a self-fulfilling or self-defeating prediction. Nonvisual Visualizations. This is another post that part of me feels shouldn’t need to be said, and yet experience tells me it does. 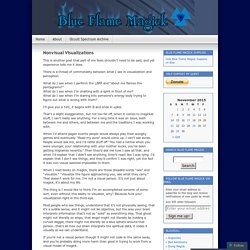 There is a thread of commonality between what I see in visualization and perception. What do I see when I perform the LBRP and “about me flames the pentagrams?” What do I see when I’m chatting with a spirit in front of me? What do I see when I’m staring into someone’s energy body trying to figure out what is wrong with them? Resonant Frequency, Synchronicity, Energy Healing & Morphic Field. (ExpandedConsciousness.com) The following is an excerpt from: Active Consciousness: Awakening the Power Within [1] R.L. 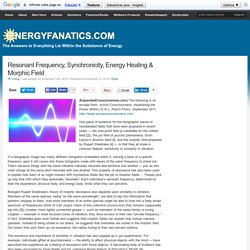 Ranch Press, September 2011, The Vulgarization of Science - Miguel de Unamuno: Quote - THE IRON SAMURAI. “In the second half of the 19th century, an age essentially unphilosophical and given to technique, dominated by a myopic specialization and historical materialism, this scientific ideal took a practical form, not so much of the popularization, as of the vulgarization of science — and expressed itself in the proliferation of democratic sets of cheap popular and propagandist literature. 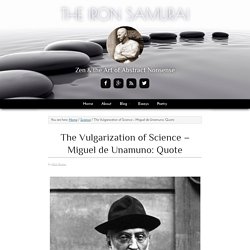 Science was thus thought to be a achieving popularity, as if it were its function to lower itself to the level of the people and serve their passions, and not the duty of the people to rise to science and through science rise to a higher level still, to new and profounder aspirations.” — Miguel de Unamuno Poor Darwin and Huxley were in constant battle with the pseudoscientific morons who distorted science into the monsters that laid waste to the 20th century. The idiocy of eugenics and (eventually) Nazism and Communism are as far from science as anything, but claimed to be scientific, even “Darwinian”.

Hannibal and Me: life lessons from history. Joseph Tainter As you know, The Hannibal Blog is fascinated by the issue of complexity in modern society. 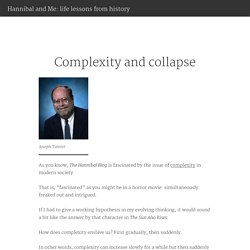 That is, “fascinated” as you might be in a horror movie: simultaneously freaked out and intrigued. If I had to give a working hypothesis in my evolving thinking, it would sound a bit like the answer by that character in The Sun Also Rises: How does complexity enslave us? First gradually, then suddenly. In other words, complexity can increase slowly for a while but then suddenly becomes catastrophic. Ritual Epistemology. Sarah Perry is a contributing editor of Ribbonfarm. 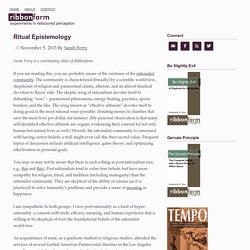 If you are reading this, you are probably aware of the existence of the rationalist community. The community is characterized (broadly) by a scientific worldview, skepticism of religion and paranormal claims, atheism, and an almost fanatical devotion to Bayes’ rule. The skeptic wing of rationalism devotes itself to debunking “woo” – paranormal phenomena, energy healing, psychics, spoon benders, and the like. The wing known as “effective altruism” devotes itself to doing good in the most rational ways possible: donating money to charities that save the most lives per dollar, for instance.

(My personal observation is that many self-identified effective altruists are vegans, evidencing their concern for not only human but animal lives as well.) You may or may not be aware that there is such a thing as post-rationalism (see, e.g., this and this). I am sympathetic to both groups. Legal Ritual Evidence. Postrationalism. "Postrationalism" is our reaction against some of the silliness of modern conceptions of "rationality", while keeping the strong emphasis on correct thinking, skeptical evidence-based inquiry, and field performance as the final test of ways of thinking. 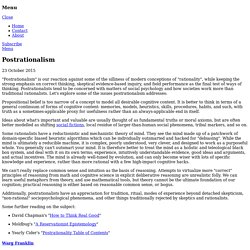 Postrationalists tend to be concerned with matters of social psychology and how societies work more than traditional rationalists. Let's explore some of the issues postrationalism addresses: Propositional belief is too narrow of a concept to model all desirable cognitive content. It is better to think in terms of a general continuum of forms of cognitive content: memories, models, heuristics, skills, procedures, habits, and such, with truth as a sometimes-applicable proxy for usefulness rather than an always-applicable end in itself. Some rationalists have a reductionistic and mechanistic theory of mind. We can't really replace common sense and intuition as the basis of reasoning.

Some further reading on the subject: Hannibal and Me: life lessons from history. A lot of people have a very famous story … wrong. 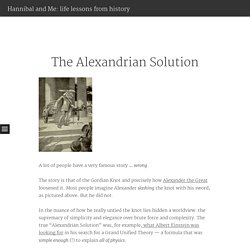 The story is that of the Gordian Knot and precisely how Alexander the Great loosened it. Most people imagine Alexander slashing the knot with his sword, as pictured above. But he did not. David Chapman at WordPress. Reading Ritual and Its Consequences: An Essay on the Limits of Sincerity was somewhat shocking. The book covers many of the same topics I plan to write about, both here and in the Meaningness book; and comes to mostly the same conclusions. Does that mean my work is wasted? I’m unsure.

I plan to continue regardless. Idea: The halo effect. The existence of the so-called halo effect has long been recognised. It is the phenomenon whereby we assume that because people are good at doing A they will be good at doing B, C and D (or the reverse—because they are bad at doing A they will be bad at doing B, C and D). The phrase was first coined by Edward Thorndike, a psychologist who used it in a study published in 1920 to describe the way that commanding officers rated their soldiers. He found that officers usually judged their men as being either good right across the board or bad.

There was little mixing of traits; few people were said to be good in one respect but bad in another. Later work on the halo effect suggested that it was highly influenced by first impressions. Recognition that the halo effect has a powerful influence on business has been relatively recent.