The Power of Silence

Paul Goodman on the Nine Kinds of Silence. By Maria Popova “I must learn to keep silent,” young André Gide resolved in his journal. 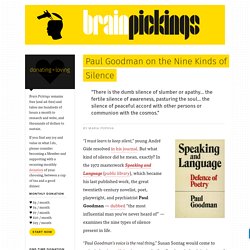 But what kind of silence did he mean, exactly? In the 1972 masterwork Speaking and Language (public library), which became his last published work, the great twentieth-century novelist, poet, playwright, and psychiatrist Paul Goodman — dubbed “the most influential man you’ve never heard of” — examines the nine types of silence present in life. “Paul Goodman’s voice is the real thing,” Susan Sontag would come to write in her beautiful eulogy a week after Goodman’s death in August of the same year. “There has not been such a convincing, genuine, singular voice in our language since D.H. Goodman writes: Not speaking and speaking are both human ways of being in the world, and there are kinds and grades of each. Thoreau on How Silence Ennobles Speech and the Ideal Space for Conversation. More than a century before Susan Sontag wrote that “silence remains, inescapably, a form of speech,” Henry David Thoreau (July 12, 1817–May 6, 1862) wrote in his journal in 1853: “I wish to hear the silence of the night, for the silence is something positive and to be heard.” 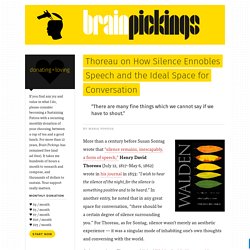 In another entry, he noted that in any great space for conversation, “there should be a certain degree of silence surrounding you.” For Thoreau, as for Sontag, silence wasn’t merely an aesthetic experience — it was a singular mode of inhabiting one’s own thoughts and conversing with the world. Only a year later, Thoreau published Walden (public library; public domain) — one of the most insightful books ever written, which also gave us his enduring ideas on defining your own success — and expounded on this notion that silence ennobles conversation by giving thought space to unfold.

Thoreau writes of the small cabin he built with his own hands: The Transfiguration of Aloneness: David Whyte on Longing and Silence. Longing is one of those acutely reality-warping emotions that magnify their object — be it a person or an outcome — to astonishing proportions until it eclipses just about everything else in your landscape of priorities. 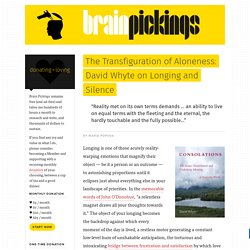 In the memorable words of John O’Donohue, “a relentless magnet draws all your thoughts towards it.” The object of your longing becomes the backdrop against which every moment of the day is lived, a restless motor generating a constant low-level hum of unshakable anticipation, the torturous and intoxicating bridge between frustration and satisfaction by which love traverses the abyss of loneliness. Whyte writes: Perhaps most disorienting of all is how longing imposes its own rhythm and pace of expectancy, suffused with unbearable urgency — an hour spent in waiting feels like eternity, at once utterly deadening in its dread and utterly enlivening in its potential for ecstatic relief, calling to mind Virginia Woolf’s enduring insight into the elasticity of time.

The Power of Calm

Solitude. Training. Shhh. How to use the power of silence to improve just about everything. (Photo by iStock) I walked down the street, stopped at the corner and waited for the light to change. 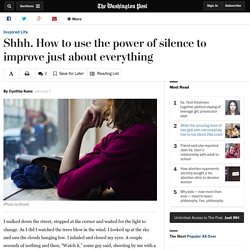 As I did I watched the trees blow in the wind. I looked up at the sky and saw the clouds hanging low. I inhaled and closed my eyes. A couple seconds of nothing and then, “Watch it,” some guy said, shooting by me with a look. About to react, I stopped myself from saying anything. I used to be uncomfortable with silence. [Harvard neuroscientist: Meditation not only reduces stress, here’s how it changes your brain] What started out as a weekend experiment has turned into a life practice.

Here’s an introduction to the benefits of silence, and the steps you can take to create more of it for yourself. 1. As mentioned before, I used to talk a lot. So how does silence help? [Don’t ‘Get over it': How accepting hard times can help you triumph over them.] Incorporating silence gives us time for ourselves. 2.Enhanced Relationships 3. How to do a Vow of Silence.