« The harder you try to be perfect, the less likely you’ll accomplish your goals. » Jon Acuff

« Self-compassion is such an important skill to develop when it comes to taming self-sabotage. 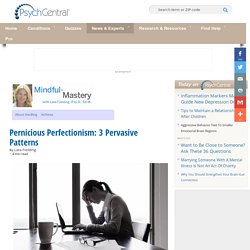 You set high expectations for yourself, which can lead to success, and boost your self-esteem. But with those lofty goals can come a reciprocal mountain of self-criticism and judgment, which gets in the way of the success you seek! Are you stuck in Pernicious Perfectionism? Three Typical Patterns of Perfectionism Rigid perfectionistic beliefs have been linked to everything from anxiety disorders to suicidal ideation, not to mention the paradoxical decrease in performance. Here are three typical patterns of perfectionism and the common thought, feeling, and action tendencies underlying them. Amy: The Overachiever The Pattern: Perfectionism had worked for Amy growing up in a highly critical family. Most of the time, she was successful in her pursuits and she received praise from others.

Jay: The ‘Failure’ The Pattern: Jay grew up in a family of over-achievers. Donna: The Procrastinator. The 2 Types of Perfectionism: One Helps While The Other Sabotages You. Share share share share A certain type of perfectionism can lead to depression, anxiety and eating disorders. 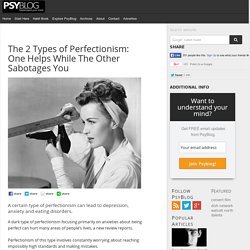 A dark type of perfectionism focusing primarily on anxieties about being perfect can hurt many areas of people’s lives, a new review reports. Perfectionism of this type involves constantly worrying about reaching impossibly high standards and making mistakes. It also involves worrying about letting others down. The psychologists found that the personality trait was most strongly linked to burnout at work. This may be because high performance in the workplace can often go unrewarded.

In contrast, a related personality trait which focuses on striving for perfection is linked to more positive outcomes. People who set themselves high goals and work towards them pro-actively do better than those who focus more on their anxieties. The conclusions come from a review of 43 different studies conducted over 20 years. Dr Andrew Hill, the study’s lead author, said: A Highly Valued Personality Trait That Sadly Increases The Risk of Suicide. 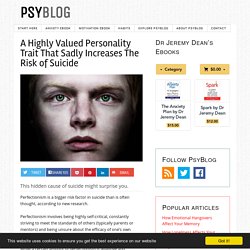 Perfectionism is a bigger risk factor in suicide than is often thought, according to new research. Perfectionism involves being highly self-critical, constantly striving to meet the standards of others (typically parents or mentors) and being unsure about the efficacy of one’s own actions. Pathways to Bliss: Joseph Campbell on Why Perfectionism Kills Love and How to Save Your Relationship.

“Where the myth fails, human love begins,” Anaïs Nin wrote in her diary in 1941. 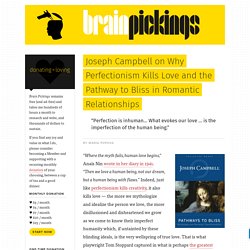 “Then we love a human being, not our dream, but a human being with flaws.” Indeed, just like perfectionism kills creativity, it also kills love — the more we mythologize and idealize the person we love, the more disillusioned and disheartened we grow as we come to know their imperfect humanity which, if untainted by these blinding ideals, is the very wellspring of true love. That is what playwright Tom Stoppard captured in what is perhaps the greatest definition of love, in his notion of “the mask slipped from the face,” the stripping of the idealized projection, the surrender to the beautiful imperfection of a human being. Anne Lamott on Writing and Why Perfectionism Kills Creativity. Anne Lamott’s Bird by Bird: Some Instructions on Writing and Life (public library) is among my ten favorite books on writing — a treasure trove of insight both practical and profound, timelessly revisitable and yielding deeper resonance each time. 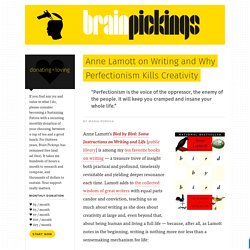 Lamott adds to the collected wisdom of great writers with equal parts candor and conviction, teaching us as much about writing as she does about creativity at large and, even beyond that, about being human and living a full life — because, after all, as Lamott notes in the beginning, writing is nothing more nor less than a sensemaking mechanism for life: One of the gifts of being a writer is that it gives you an excuse to do things, to go places and explore. Another is that writing motivates you to look closely at life, at life as it lurches by and tramps around. I started writing when I was seven or eight. Mastery. Continual Improvement Process. The Mental Load. Chronic Fatigue. Guilt. Flaws. Making Mistakes. How To Be Your Most Productive Self: Let Go Of Being Perfect. We live in an era of overachievement, and in this era flaunting those achievements (we’re looking at you, social media) is totally the norm. 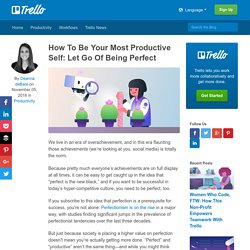 Because pretty much everyone’s achievements are on full display at all times, it can be easy to get caught up in the idea that “perfect is the new black,” and if you want to be successful in today’s hyper-competitive culture, you need to be perfect, too. If you subscribe to this idea that perfection is a prerequisite for success, you’re not alone: Perfectionism is on the rise in a major way, with studies finding significant jumps in the prevalence of perfectionist tendencies over the last three decades. But just because society is placing a higher value on perfection doesn’t mean you’re actually getting more done. “Perfect” and “productive” aren’t the same thing—and while you might think perfectionism is the key to racking up more achievements and getting more done, the truth is, perfectionism is actually counterproductive.

How to Beat Perfectionism, Make Progress, and Find Happiness. Can't Do It Perfectly? Just Do It, Badly! Five Ways to Find Perfection in Your Imperfections. “This is our perfection: to find out our imperfections”– St. 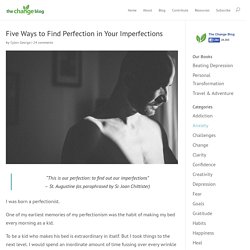 Augustine (as paraphrased by Sr. Joan Chittister) I was born a perfectionist. One of my earliest memories of my perfectionism was the habit of making my bed every morning as a kid. To be a kid who makes his bed is extraordinary in itself. Ensuring my bed was perfectly made was a sign of something deeper. I craved predictability because I was also a severe stutterer. No matter how hard I tried to hide my imperfect speech, it wouldn’t cooperate. I was ashamed. As I reached adolescence and early adulthood, it slowly dawned on me that the work of my life was not to stamp out all my imperfections but to let the imperfection itself become perfect. One day, I simply decided to accept my speech, just as it was. I want the same for you too. Five Ways to Overcome Fear of Failure and Perfectionism. Anti-Perfectionism Anthems Can Silence Your Inner Critic. Season 4, Episode 11: Escape Perfectionism Once and for All [Podcast]

Welcome to Season 4, Episode 11 of the This Is Your Life podcast. 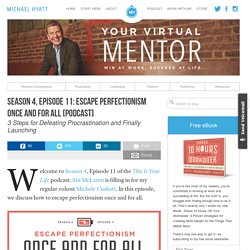 Stu McLaren is filling in for my regular cohost Michele Cushatt. In this episode, we discuss how to escape perfectionism once and for all. Perfectionism is the enemy of productivity and success. It costs us opportunities, even freedom. But anyone can beat perfectionism and finally launch with the three simple steps we lay out in today’s podcast. Listen to the Audio.