Typography. A specimen of roman typefaces by William Caslon Typography is the art and technique of arranging type, type design, and modifying type glyphs (symbolic figures). 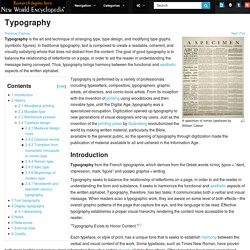 Tools - Why are Apple Macs used so much in the graphic design industry? Fonts Mac OS X arguably comes with better fonts out of the box, but people can argue about this. 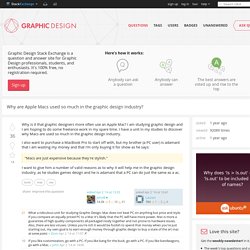 Where it has a clear advantage, though, is management and ease of use. The built-in font chooser on a mac is leagues ahead of what you get in Windows programs, and the built-in font manager is simple and powerful (for some purposes you still need 3rd party software, but Windows font management absolutely sucks). Font smoothing is also vastly better on a Mac. Windows font smoothing still looks blurry in a lot of places, and Linux is just best not discussed. UI Consistency I'm on a Windows box right now, and I have open four applications that all have subtly different UI styles (not including Windows 8 Metro Apps) - all are Microsoft programs. This also extends to deeper concepts like changing application and system settings. Modifier Keys. The Mac turns 30: a visual history. "Introducing Macintosh" <img src=" alt="'Introducing Macintosh'" title="'Introducing Macintosh'"> "Soon there'll be just two kinds of people," Apple's ads said. 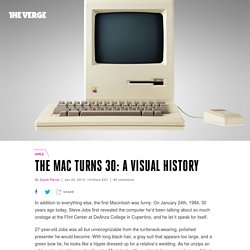 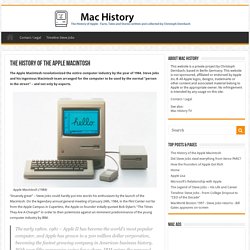 IBM Archives: The birth of the IBM PC. Non-IBM personal computers were available as early as the mid-1970s, first as do-it-yourself kits and then as off-the-shelf products. 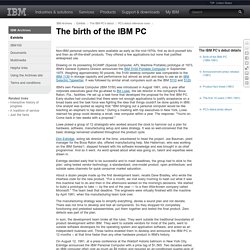 They offered a few applications but none that justified widespread use. Drawing on its pioneering SCAMP (Special Computer, APL Machine Portable) prototype of 1973, IBM's General Systems Division announced the IBM 5100 Portable Computer in September 1975. Weighing approximately 50 pounds, the 5100 desktop computer was comparable to the IBM 1130 in storage capacity and performance but almost as small and easy to use as an IBM Selectric Typewriter. It was followed by similar small computers such as the IBM 5110 and 5120. Microsoft MS-DOS early source code. Software Gems: The Computer History Museum Historical Source Code Series IBM did something very unusual for their 1981 personal computer Rather than using IBM proprietary components developed for their many other computers, the IBM PC used industry standard commercial parts. 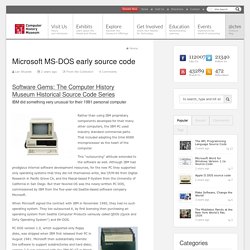 That included adopting the Intel 8088 microprocessor as the heart of the computer. This “outsourcing” attitude extended to the software as well. Although IBM had prodigious internal software development resources, for the new PC they supported only operating systems that they did not themselves write, like CP/M-86 from Digital Research in Pacific Grove CA, and the Pascal-based P-System from the University of California in San Diego. Atanasoff-Berry Computer Operation/Purpose. The Atanasoff Berry Computer, later named the ABC, was built at Iowa State University from 1939-1942 by physics professor Dr. 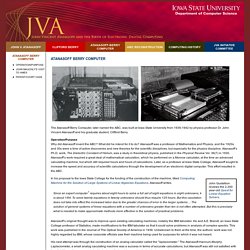 John Vincent Atanasoff and his graduate student, Clifford Berry. History of computers - from the Abacus to the iPhone. By Chris Woodford. 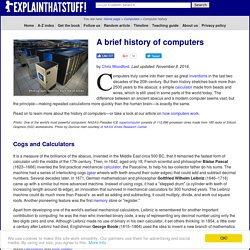 Last updated: January 9, 2016. Brief History Of Computer. The computer as we know it today had its beginning with a 19th century English mathematics professor name Charles Babbage. 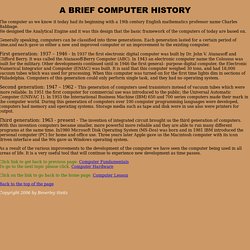 He designed the Analytical Engine and it was this design that the basic framework of the computers of today are based on. Generally speaking, computers can be classified into three generations. Each generation lasted for a certain period of time,and each gave us either a new and improved computer or an improvement to the existing computer. First generation: 1937 – 1946 - In 1937 the first electronic digital computer was built by Dr. John V. Kony 2012 Cover the Night fails to move from the internet to the streets. The Kony 2012 Cover the Night campaign woke up to awkward questions on Saturday after activists failed to blanket cities with posters of the wanted Ugandan warlord, Joseph Kony. 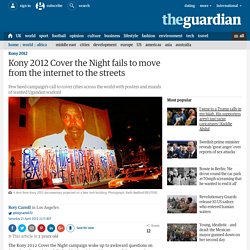 The movement's phenomenal success in mobilising young people online, following last month's launch of a 29-minute documentary which went viral, flopped in trying to turn that into real world actions. The campaign aimed to plaster "every city, on every block" around the world with posters, stickers and murals of Kony to pressure governments into hunting down the guerrilla leader, who has waged a brutal, decades-long insurgency in central Africa. But paltry turnouts on Friday at locations across north America, Europe and Australia left cities largely unplastered and the movement's credibility damaged. "What happened to all the fuss about Kony?

" said one typical tweet. S Invention. The printing trade was well established even before Gutenberg's time, using woodblock technology. A sheet of paper was placed on the inked woodblock and an impression taken by rubbing - a complex and time-consuming procedure. The genius of Gutenberg's invention was to split the text into its individual components, such as lower and upper case letters, punctuation marks, ligatures and abbreviations, drawing on the traditions of medieval scribes. These individual items were then cast in quantity as mirror images and assembled to form words, lines and pages.

Where was I? Design before computers ruled the universe. Craft in an Age of Change.