Roland-barthes-the-pleasure-of-the-text. Sam Bevington - Poster Design illustrator & Printmaker, Melbourne, Australia. Overview Now based in Melbourne, Australia, Sam grew up in North London where he enjoyed skateboarding as a youth, and the graphics and music that went with it. 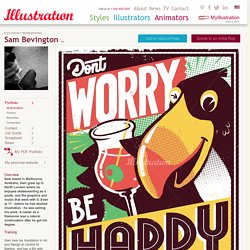 Even at 17 - before he had studied illustration - he was selling his work. A career as a freelancer was a natural continuation after he got his degree. Training Sam took his foundation in Art and Design at Central St Martins, and has a BA with honours from UWE Bristol. Approach Impact is what Sam’s work offers. Style Sam often turns inanimate objects into little characters by adding arms, legs and faces to them, and also uses bold, catchy slogans in many of his illustrations.

Client List LUSH CosmeticsThe GuardianJack Daniels3 MobileWhich? The Future of Graphic Design. For the last 18 months, the graphic design world has been fixated on the simple, stylish traditions of the Swiss Style – something that spread to the fashion and product design world and was driven to some degree by the popularity of TV drama Mad Men, which is set in the early 1960s. 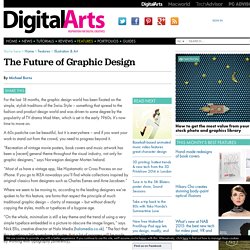 It’s now time to move on. A 60s pastiche can be beautiful, but it is everywhere – and if you want your work to stand out from the crowd, you need to progress beyond it. “Recreation of vintage movie posters, book covers and music artwork has been a [recent] general theme throughout the visual industry, not only for graphic designers,” says Norwegian designer Morten Iveland. “Most of us have a vintage app, like Hipstamatic or Cross Process on our iPhone.

If you go to IKEA nowadays you’ll find whole collections inspired by original classics from designers such as Charles Eames and Arne Jacobsen.” In-store advertising material for Lettucewear scarfs by design company Form. Traditional vs. Digital Arts. After 10 years of working as a graphic designer, it was quite a unique experience for me to have some time for traditional arts. 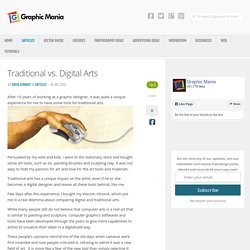 Persuaded by my wife and kids, I went to the stationary store and bought some art tools, such as oil, painting brushes and sculpting clay. It was not easy to hide my passion for art and love for the art tools and materials. A History of Graphic Design: Chapter 73 : Traditional Graphic Design versus Digital Graphic Design. Now, instead of a mass audience consuming media from a single source, we have multiple sources, multiple channels and multiple audiences. 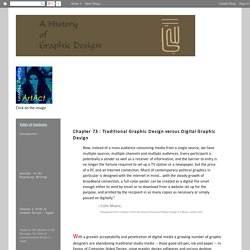 Every participant is potentially a sender as well as a receiver of information, and the barrier to entry is no longer the fortune required to set up a TV station or a newspaper, but the price of a PC and an Internet connection. Much of contemporary political graphics in particular is designed with the internet in mind…with the steady growth of broadband connection, a full-color poster can be created as a digital file small enough either to send by email or to download from a website set up for the purpose, and printed by the recipient in as many copies as necessary or simply passed on digitally. " A History of Graphic Design: Chapter 73 : Traditional Graphic Design versus Digital Graphic Design.

The Machine That Made Us. Home » Technology 10 Comments The Machine That Made Us is a documentary in which Stephen Fry examines the story behind the first media entrepreneur, printing press inventor Johann Gutenberg, to find out why he did it and how, a story which involves both historical inquiry and hands-on craft and technology. 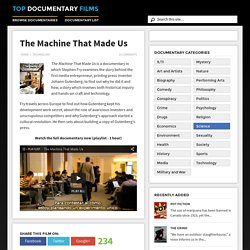 Fry travels across Europe to find out how Gutenberg kept his development work secret, about the role of avaricious investors and unscrupulous competitors and why Gutenberg's approach started a cultural revolution. He then sets about building a copy of Gutenberg's press. Watch the full documentary now (playlist - 1 hour) Share this film on: FacebookTwitterGoogle+234 Ratings: 9.08/10 from 25 users. More great documentaries: by Taboolaby Taboola Sponsored LinksSponsored Links Promoted LinksPromoted Links From The Web ViralScape 17 Extreme Selfies That Are Not For The Faint-HeartedViralScape Undo.

The History of Visual Communication - The Computer. Postmodernity Postmodernity is a term used to describe the social and cultural implications of postmodernism. 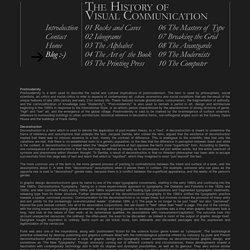 The term is used by philosophers, social scientists, art critics and social critics to refer to aspects of contemporary art, culture, economics and social conditions that are the result of the unique features of late 20th century and early 21st century life. These features include globalization, consumerism, the fragmentation of authority, and the commoditization of knowledge (see "Modernity"). "Post-modernity" is also used to demark a period in art, design and architecture beginning in the 1950's in response to the International Style, or an artistic period characterized by the abandonment of strong divisions of genre, "high" and "low" art, and the emergence of the global village.

Deconstruction Deconstruction is a term which is used to denote the application of post-modern theory, to a "text". Further reading Neville Brody for FUSE David Carson, advertising design 1990's. Computer graphics. Computer graphics are pictures and movies created using computers - usually referring to image data created by a computer specifically with help from specialized graphic hardware and software. 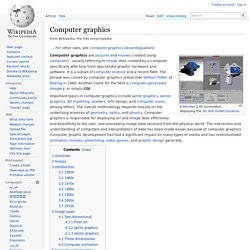 It is a subset of computer science and a recent field. The phrase was coined by computer graphics researcher William Fetter of Boeing in 1960. Another name for the field is computer-generated imagery, or simply CGI. Overview[edit] The term computer graphics has been used in a broad sense to describe "almost everything on computers that is not text or sound".[1] Typically, the term computer graphics refers to several different things: Computer graphics is widespread today. Many powerful tools have been developed to visualize data. History[edit] Introduction[edit] 1950s[edit] SAGE Sector Control Room.