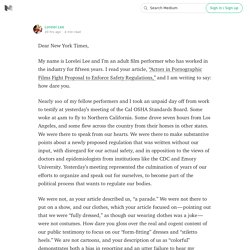 I read your article, “Actors in Pornographic Films Fight Proposal to Enforce Safety Regulations,” and I am writing to say: how dare you. Nearly 100 of my fellow performers and I took an unpaid day off from work to testify at yesterday’s meeting of the Cal OSHA Standards Board. Some woke at 4am to fly to Northern California. Some drove seven hours from Los Angeles, and some flew across the country from their homes in other states. We were not, as your article described us, “a parade.” I’m not writing to you simply because I am angered by the mistakes of one reporter. I promise you that my coworkers and I already know what most of the world thinks of us. Time and again we’ve been told that because of the labor we do with our bodies, we must not have fully developed brains as well.

We already know what most of the world thinks of us and yet we continue to fight. Artsy. The community at Black Mountain was forged as much in the beautiful rural isolation of its location in Black Mountain, North Carolina (the college moved from its original campus, the YMCA Blue Ridge Assembly, to the shores of Lake Eden in 1941), as by the progressive values of its founders. 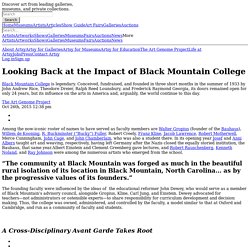 When they arose, issues were resolved via community meetings of faculty and students. Both students and faculty were responsible for general maintenance, including the serving of meals, which were eaten communally in the dining hall. Unusually for schools of the period, Black Mountain admitted men and women. Equally progressive, and perhaps a little shocking in the context of further education today, students at Black Mountain were responsible for their own education. Each student designed their studies with an advisor and no letter grades were awarded (this was later changed in order to facilitate the transfer of credits but students were still not made aware of them).

How Dancers Think When They Dance ‹ TERP. By David Kohn | photo by Toni Gauthier Neuroscientists haven’t really explored how movement and thought interact, largely because it’s hard for anyone to leap, twist and turn while lying flat in an MRI tube, or connected to a tangle of wires. 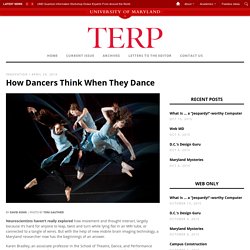 But with the help of new mobile brain imaging technology, a Maryland researcher now has the beginnings of an answer. Karen Bradley, an associate professor in the School of Theatre, Dance, and Performance Studies, and University of Houston neuroscientist Jose Contreras-Vidal, formerly an associate professor of kinesiology at Maryland, analyzed dancers’ brain signals as they thought about dancing and as they performed. They wore lightweight wireless sensors on their scalps in order to move unimpeded. The study is featured in the April issue of the journal Frontiers in Human Neuroscience. Researchers place a brainwave measurement cap on one of the dancers participating in the study. “I have never seen a study like this before. 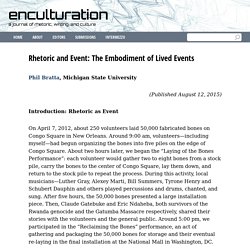 Around 9:00 am, volunteers—including myself—had begun organizing the bones into five piles on the edge of Congo Square. About two hours later, we began the “Laying of the Bones Performance”: each volunteer would gather two to eight bones from a stock pile, carry the bones to the center of Congo Square, lay them down, and return to the stock pile to repeat the process. Figure 1: Jamilah Yejide Peters-Muhammad leading the Opening Ceremony at the New Orleans installation ( The New Orleans performance and installation was a preview-installation for the larger social arts project One Million Bones.

Figure 2: The One Million Bones final installation on the National Mall in Washington DC, USA. Figure 3: One Million Bones Albuquerque Event. Figure 4: One Million Bones New Orleans Installation Conclusion. The Truth About Stretching: When It Helps and When It Doesn't. What Emotions Are (and Aren’t) Photo OUR senses appear to show us the world the way it truly is, but they are easily deceived. 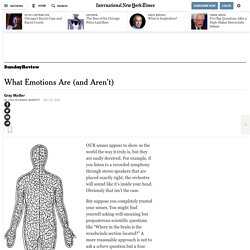 For example, if you listen to a recorded symphony through stereo speakers that are placed exactly right, the orchestra will sound like it’s inside your head. Obviously that isn’t the case. But suppose you completely trusted your senses. You might find yourself asking well-meaning but preposterous scientific questions like “Where in the brain is the woodwinds section located?” I have just set the stage to dispel a major misconception about emotions. Of course, we experience anger, happiness, surprise and other emotions as clear and identifiable states of being. Such characteristics are thought to be the unique biological “fingerprints” of each emotion. Some scientific studies seem to support that such fingerprints exist. Let’s start with neuroscience. Overall, we found that no brain region was dedicated to any single emotion.