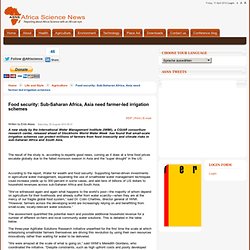 The result of the study is, according to experts good news, coming as it does at a time food prices escalate globally due to the failed monsoon season in Asia and the “super drought” in the US. According to the report, Water for wealth and food security: Supporting farmer-driven investments in agricultural water management, expanding the use of smallholder water management techniques could increase yields up to 300 percent in some cases, and add tens of billions of US dollars to household revenues across sub-Saharan Africa and South Asia. 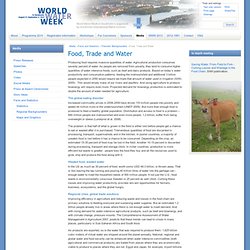 Agricultural production consumes seventy percent of water. As people are removed from poverty, they tend to consume higher quantities of water intensive foods, such as beef and dairy products. Based on today’s water productivity and consumption patterns, feeding the malnourished and additional 3 billion people expected in 2050 would require we triple that amount of water used in irrigation (SIWI, 2005) . This would empty many of our rivers and aquifers. And using agriculture to produce bioenergy will require even more. The global eating disorder. Is nexus thinking finally taking off? The connections with local interests and concerns must be addressed when using nexus thinking. 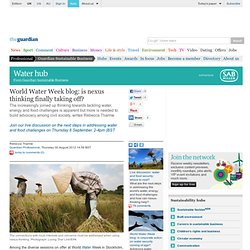 Photograph: Luong Thai Linh/EPA Among the diverse sessions on offer at World Water Week in Stockholm, I've noticed a thread of common thinking: nexus thinking. The water-food-energy nexus, which places ecosystems and their services to people at its very heart, isn't just an abstract theory - it really is being applied to the way the water community is tackling the issues. Such alignment and the debates it generates have been a long time coming, and it's certainly exciting to be in the middle of it. Personally, I think the nexus is a really useful way to apply an integrative cross sector approach to water security. I can relate the nexus thinking I'm seeing at the conference to our work on the ground in river basins. Let's take an example. Rebecca Tharme is senior aquatic ecologist on the Global Freshwater Team at The Nature Conservancy. 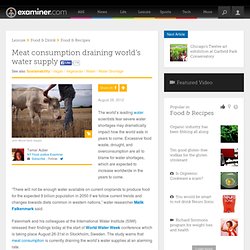 Excessive food waste, drought, and overconsumption are all to blame for water shortages, which are expected to increase worldwide in the years to come. No Water, No Food Security. July was the hottest month on record in the U.S. and with it the price of maize jumped 23 percent. 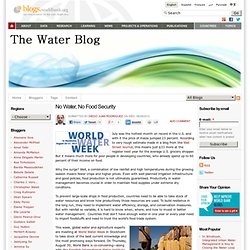 According to very rough estimate made in a blog from the Wall Street Journal, this means just $33 more at the register next year for the average U.S. grocery shopper. But it means much more for poor people in developing countries, who already spend up to 60 percent of their income on food. Why the surge? Well, a combination of low rainfall and high temperatures during the growing season means fewer crops and higher prices. The Link Between Food and Water Footprint. Thursday, August 23, 2012 - Raw Team Feature World Water Week1 kicks off on 26th August with a theme of water and its relationship to food security. 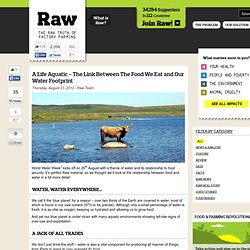 It’s perfect Raw material, so we thought we’d look at the relationship between food and water in a bit more detail. Water, water everywhere… We call it the ‘blue planet’ for a reason – over two thirds of the Earth are covered in water, most of which is found in our vast oceans (97% to be precise). Waste Food, Waste Water. World Water Week—an annual conference in Stockholm dedicated to discussing the management of global water resources—opened Monday with a message about cleaning your plate. 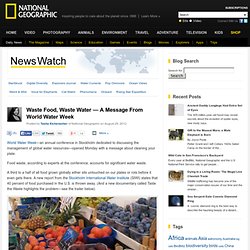 Food waste, according to experts at the conference, accounts for significant water waste. A third to a half of all food grown globally either sits untouched on our plates or rots before it even gets there. A new report from the Stockholm International Water Institute (SIWI) states that 40 percent of food purchased in the U.S. is thrown away. (And a new documentary called Taste the Waste highlights the problem—see the trailer below). An Italian food market. This is a horrible habit when you consider that nearly one billion people in the world already suffer from hunger and malnourishment. This is why food security is inextricably linked to water security. We currently use about 70 percent of available global freshwater to irrigate crops and produce food. “Feeding everyone well is a primary challenge for this century. Water and Food Security are linked. News Drought, Shortages, Rising Food Prices for World Water Week 27 August 2012 ANALYSIS - This week is World Water Week - a week when governments, environmental organisations, industry and agriculture is turning its attention to the importance of this vital resource, writes Chris Harris. 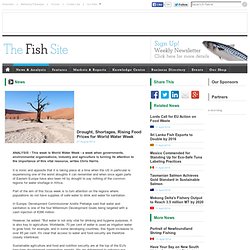 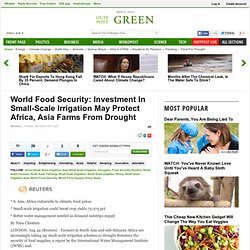 Asia, Africa vulnerable to climate, food prices * Small-scale irrigation could boost crop yields 75-275 pct * Better water management needed as demand outstrips supply By Nina Chestney LONDON, Aug 24 (Reuters) - Farmers in South Asia and sub-Saharan Africa are increasingly taking up small-scale irrigation schemes as drought threatens the security of food supplies, a report by the International Water Management Institute (IWMI) said. "With food security back on the international agricultural agenda, and climate change increasing the uncertainty of rainfall, it is an opportune time to reconsider investments related to irrigated agriculture," the study said on Friday. Small-scale irrigation technology, such as motorized pumps and hosing to access groundwater, could cost a sub-Saharan African smallholder $250 or more but could improve crop yields by between 75 and 275 percent, the report said. Small-scale irrigation schemes usually cover areas less than 2 hectares.