Executive pay: what's the magic formula? How much should a charity chief executive be paid? 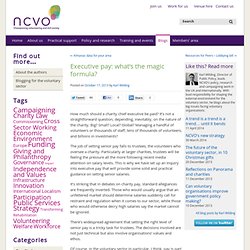 It’s not a straightforward question, depending, inevitably, on the nature of the charity. Big? Small? Local? Global? How can there be a 'one size fits all' definitive guidance on charity pay? Recently I gave a presentation to the chairs of the Greater London Older People's Forum. 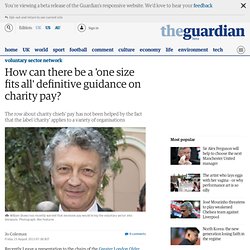 One of the chairs made a very valuable point, which is that although the public talk in terms of 'older people' and 'older people's issues', in fact the issues affecting those aged 55 – 65 are very different from the issues affecting those in their 90s. The simple label 'older people' belies the complexity of the underlying groups and their issues. The recent row over charity chief executives' salaries was exposed by The Daily Telegraph last weekend and was accompanied by an interview with William Shawcross warning about excessive pay bringing the sector into disrepute. Few charities came forward to defend their executives' pay levels, preferring to stay below the parapet and hope that the furore that followed landed at someone else's door.

A bit like the bankers, or BBC executives, or head teachers, or MPs. It is also misleading to suggest that charities are not transparent. Charity bosses - 2012. Newstalk 10:25 Thursday 16 August 2012 A charity that supports families with seriously ill children has revealed the public has donated €36 million to their cause in the past 15 years. 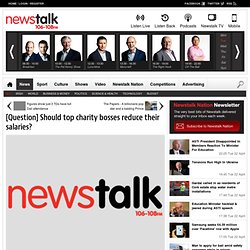 That compares with government funding of €4 million. It comes in a week when a number of charities have revealed the drastic steps they’re taking to save money. Barnardos has shut down for a week, while it’s emerged that staff at the ISPCC are taking unpaid leave. Pay of charity chiefs - 2011. WITH a reputation for generosity that puts us ahead of many of our international counterparts, the Irish public is not shy when it comes to supporting good causes. 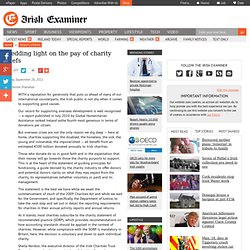 Our record for supporting overseas development is well recognised — a report published in July 2010 by Global Humanitarian Assistance ranked Ireland asthe fourth most generous in terms of donations per citizen. But overseas crises are not the only reason we dig deep — here at home, charities supporting the disabled, the homeless, the sick, the young and vulnerable, the impoverished — all benefit from an estimated €500 million donated annually to Irish charities. Those who donate do so in good faith and in the expectation that their money will go towards those the charity purports to support. As it stands, most charities subscribe to the charity statement of recommended practice (SORP), which provides recommendations on how accounting standards should be applied in the context of charities. Charity chiefs earn up to €150k - 2011. Claire Murphy – 26 September 2011 10:05 AM The chief executives of 24 leading Irish charities are still earning sums well over three times the average industrial wage -- even after most agreed to pay cuts in the past few years. 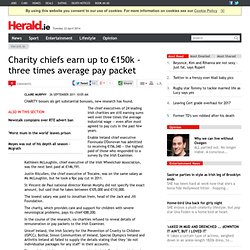 St Vincent de Paul national director Kieran Murphy did not specify the exact amount, but said that he takes between €105,000 and €110,000. 'Fat cat'' CEO salaries - 2007. Updated 25 November 2012 05:53 PM Away from the old image of ad-hoc charities, Goal and Concern are now operating internationally with multi-million-euro budgets with large staffs in Ireland, the UK and the US. 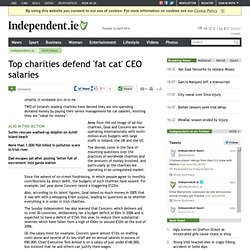 Making money helping others / not helping? Charity CEOs' pay: let's talk about transparency. See p.31: Transparency about salaries. Show me the money. « Humanicontrarian. Go back three decades (or so).

Question to WWF champ Bob Backlund: What could possibly persuade a man to earn a living by getting his brains beaten out while wearing a Speedo? Answer: I make more money than the President of the United States. Bob has me beat. Debunking Charity Salary Myths. Debunking Charity Salary Myths - published in the December 2008 issue of the Charity Rating Guide & Watchdog Report High salaries should not signal a red light to not give just as low salaries should not signal a green light to give. 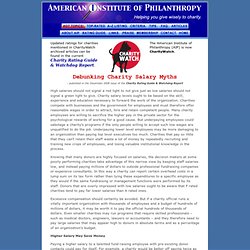 Charity salary levels ought to be based on the skill, experience and education necessary to forward the work of the organization. Charities compete with businesses and the government for employees and must therefore offer reasonable wages in order to attract, hire and retain competent people. Pay peanuts, get monkeys. I recently read with interest Edward Bauer’s criticism of the decision by the Trustees of the National Union of Students to pay new Chief Executive Ben Kernighan c.£100,000 (a 16% increase from that of the previous Chief Executive). 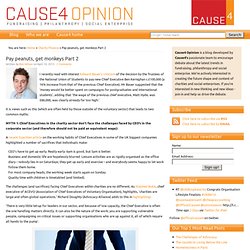 Mr Bauer suggested that the ‘money would be better spent on campaigns for postgraduates and international students’, adding that ‘the wage of the previous chief executive, Matt Hyde, was £86,000, was clearly already far too high.’ It is views such as this (which are often held by those outside of the voluntary sector) that leads to two common myths: MYTH 1: Chief Executives in the charity sector don’t face the challenges faced by CEO’s in the corporate sector (and therefore should not be paid an equivalent wage): A recent Guardian article on the working habits of Chief Executives in some of the UK biggest companies highlighted a number of sacrifices that individuals make: CEO’s have to get up early. 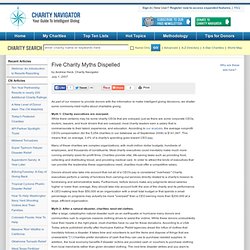 Myth 1: Charity executives are overpaid.While there certainly may be some charity CEOs that are overpaid, just as there are some corporate CEOs, doctors, lawyers, and truck drivers that are overpaid, most charity leaders earn a salary that is commensurate to their talent, experience, and education. According to our analysis, the average nonprofit CEO's compensation (for the 5,054 charities in our database as of September 2006) is $141,947. This means that, on average, 3.4% of a charity's spending goes toward CEO pay. Many of these charities are complex organizations, with multi-million dollar budgets, hundreds of employees, and thousands of constituents. NGO Admin costs and overheads. NGO Corporate Governance. Key questions to ask any charity. How to recognise an effective NGO. Charity Salaries And Overheads - It's That Time Again. It comes around about 3 times a year: a leading national newspaper publishes the (publicly available) salaries of charity staff and a bunch of people flip out.

So, for convenience, here's a collection of blog posts I've written on the subject: How Much of My Donation Is Spent On Overheads (Or Why Admin Costs Are Bullshit)"I want you to spend my donation on your wages, on your toilet paper, the spatula on the new Rainbow Warrior, on your Xmas party. Whatever you feel it takes to change the world. What trustees should be saying on CEO pay.

After my first two blogs about the newspaper-driven debate over chief executive pay, I’ve received a lot of feedback. Most has been support from charity workers, but there has been a fair bit of opposition, too, from charity workers and others. It’s clear that this debate is far from won, even within the sector. As I’ve said before, I’d like to see trustees engage with audiences inside and outside the sector, and make the case more clearly to justify the salaries they pay.

Here, basically, is what I would say if I was a trustee of an aid charity… “We are an organisation that works every day to save lives. Our view is that a chief executive is not an expense of dubious value. Maybe you think we could find someone who could do the job well for less. We have not encountered such people.

It’s true that we’re paying our leaders quite a lot. An executive decision; three things the charity CEO salary maelstrom taught us and what to do about it.