Design Milk: Design Blog with Interior Design, Modern Furniture, & Art. Magazine. Architecture. Struczone. Modern Contemporary Design. ArchiExpo e-magazine Issue#10 - Building the Infrastructure of Next-Gen Cities on Flipboard. New exhibition showcases the work of Swiss architect Gion A Caminada. The timber and stone buildings of Gion A Caminada, a cult figure in Swiss architecture, will feature in an exhibition opening next month at the House of Art in the Czech city of České Budějovice (+ slideshow). 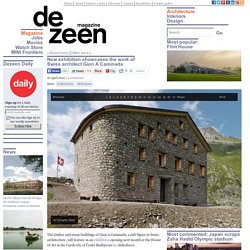 Hailing from Graubünden, the same Swiss canton as fellow architect Peter Zumthor, Gion A Caminada has built little outside of his native region and instead focussed much of his life's work on the village of Vrin, where he established his studio in the late 1970s. Both the population and the economy of the village were in serious decline, so Caminada set about providing infrastructure that would help it to thrive again. 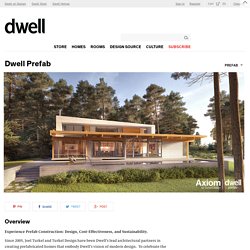 Since 2005, Joel Turkel and Turkel Design have been Dwell’s lead architectural partners in creating prefabricated homes that embody Dwell’s vision of modern design. To celebrate the partnership's tenth year, we are pleased to announce a new exclusive collaboration: Dwell Prefab. This group of homes, the Axiom Series, offers a panelized system celebrating smart design, resource conservation, energy efficiency, and a predictable building process. Axiom Series homes start at $250 per square foot and never compromise on design, quality or construction. Volume 85 Issue 3 (May/June 2015) - Architectural Design. Around the world, a new architectural form is emerging. 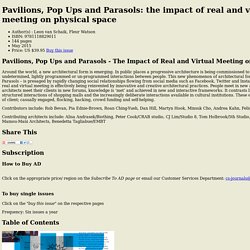 In public places a progressive architecture is being commissioned to promote open-ended, undetermined, lightly programmed or un-programmed interactions between people. This new phenomenon of architectural form – Pavilions, Pop-Ups and Parasols – is presaged by rapidly changing social relationships flowing from social media such as Facebook, Twitter and Instagram. The nexus between real and virtual meeting is effectively being reinvented by innovative and creative architectural practices. 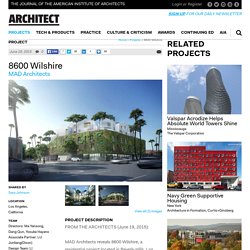 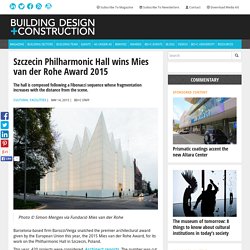 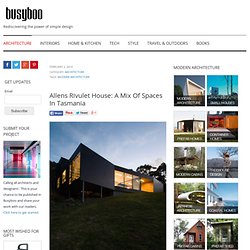 A brilliant mix of context and program is reflected in a sequence of fully enclosed to semi-enclosed spaces. All rooms are arranged in response to a spatial key element determined by the client: the kitchen. Assumed as the central piece of the composition, the kitchen is strategically positioned between two interior patios and the dining area. The garage volume gives access to the entrance deck with a partial battened clear roof. Once inside the house, an open space area gathers living, dining and kitchen only divided by a split-level floor. The most unexpected aspect about this unique home is yet to be revealed: a staircase leads up to a studio room with a storage room. The platform for architecture and design.

The Hut of Sleds - holiday house by Crosson Clarke Carnachan. Integrated into the landscape, amid the white sand dunes, in the Coromandel Peninsula, New Zealand, there is “The Hut on Sleds“, a house for a family with 5 members. 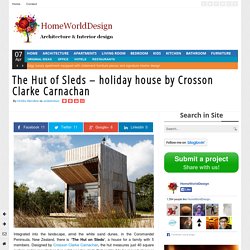 Designed by Crosson Clarke Carnachan, the hut measures just 40 square meters and is mounted on two solid wooden sleds that enable it to be moved closer or further away from the beach. This innovative portability is a response to the ever changing landscape due to the coastal erosion. In the hut, the ingenuity is present again, no corner being overlooked. Each available space has been used, everything is simple and functional. The northwest facade opens to form an awning, revealing two-storey enclosed with glass and steel frames. Hi! April 2015. [Image: From "Destination Docklands" by Emma Colthurst; via Lobby]. 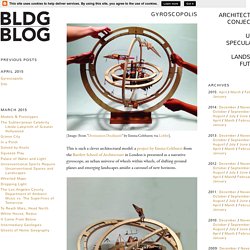 This is such a clever architectural model: a project by Emma Colthurst from the Bartlett School of Architecture in London is presented as a narrative gyroscope, an urban universe of wheels within wheels, of shifting ground planes and emerging landscapes amidst a carousel of new horizons. [Image: From "Destination Docklands" by Emma Colthurst]. Homepage - BartlettLobby. ARCHI-NAUTA. An Italian point of view on Arts, Design, Architecture: SUGGESTIONS - CHARMING ITALY: MAZZINI 31. At Monteleone d'Orvieto, in the earth of Umbria, an historical residence where culture, taste ad relax are mixed perfectly, by Patrizio Fradiani, a young italian designer based in Chicago. 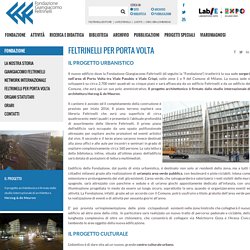 This series of houses, many of them holiday homes, together have today been recognised as a major body of work, their designs combining a thorough knowledge and training in International Modernism, honed by Ponis having worked with Ernö Goldfinger and Denys Lasdun in London, with a response to and deep understanding of the local landscape or cultural condition – key examples of what Kenneth Frampton termed “critical regionalism” . Reform architekt's mirrored home hovers between the trees. Ambience Images. Frank Lloyd Wright’s West Coast Projects Are Saluted in a New Book. Architecture: 4 Spectacular Homes That Push The Boundaries. Design - digg in! Allens Rivulet House: a mix of spaces in Tasmania. Your daily dose of architecture, design and art.

Architonic. FX - DesignCurial. ArchiCentral. Archdaily. Issuu. Dezeen. UK designers David Ben Grünberg and Daniel Woolfson have devised a concept for a shape-shifting house that morphs to deal with changing times of day, seasons and weather conditions (+ movie). Woolfson and Grünberg launched The D*Haus Company to develop the concept for the experimental house, which would fold into different configurations so that it can take on up to eight different shapes. The house was first conceived as part of Grünberg's graduation project. "It was originally devised as a home for Lapland to deal with extreme temperatures," Woolfson told Dezeen.

"Not many people know it, but they have warm summers and also really cold winters. " It's LIQUID. Archidose. A couple weeks ago I featured The Boxwood Winery by Hugh Newell Jacobsen on my weekly page, the fifth of such a building type that I've featured. Boxwood and thefourotherprojects are a varied mix that illustrates the relative freedom given architects for a fairly new building type that sits somewhere between the pastoral and the commercial. The Novelty Hill-Januik Winery in Woodinville, Washington by Seattle's Mithun is another notable winery that balances building and landscape to "celebrate wine's agrarian roots.

" The building itself is a balance of expansive, industrial concrete surfaces, soft woods and large glazed areas that make the winery an inviting location that doesn't gloss over its industrial context (the building sits between two railroad lines and just south of numerous large industrial buildings) or the industrial mechanisms that make large-scale winemaking possible. Links: Worldarchitecturenews. This exquisite market hall in Ghent, Belgium is the work of a partnership between Robbrecht en Daem Architecten and Marie-Jose Van Hee Architecten. The barbed structure spikes across a 24,000 sq m site formerly home to a desolate parking lot in the centre of Ghent, commanding the space between the spires of St Nicholas Church, the Belfry and a Cathedral. Designed to encourage local residents to convene in the market square for social gatherings and public events, the pavilion above ground marks the location of the brasserie, bicycle park and public toilets below ground, accessible through a new lower ‘green’.

(Click the images below for full sized images) Dornob. Denmark-based architect Konrad Wójcik is on a mission to remind humans just how much we have changed the natural world. With urban sprawl and a global population explosion, we have deforested much of the planet and left it a mess. FX. Dezeen. A.I.D. ISSUU - You Publish. Londonwelsh.org.