IKEA Expedit Turned into a Great Shelving Unit with Desk. I’m excited to share today’s post with you. 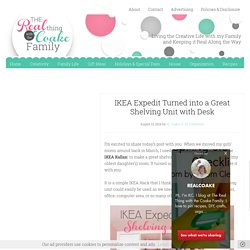 When we moved my girls’ rooms around back in March, I used an IKEA Expedit (now called the IKEA Kallax) to make a great shelving unit and desk in Snowflake’s (my oldest daughter’s) room. It turned out fantastic and I wanted to share it with you. It is a simple IKEA Hack that I think most anyone can do. The shelving unit could easily be used as we used it or as an entertainment center, office, computer area, or so many other ideas. We knew we needed additional storage in the smaller room when we moved our girls into their own rooms. DIY BUILT-IN BOOKCASE REVEAL (AN IKEA HACK) I’m in the middle of giving my home office a makeover, and one of my biggest priorities for the room has been to add some built-in storage. 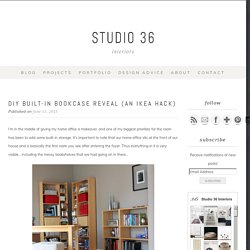 It’s important to note that our home office sits at the front of our house and is basically the first room you see after entering the foyer. Thus everything in it is very visible… including the messy bookshelves that we had going on in there… Our office also needs to be a very functional room for us. We store a lot of things in there and use the room for working and printing regularly, so we needed a way to store all of our stuff in a tidy and presentable way. Enter the built-in bookcase!

30 Genius IKEA BILLY Hacks for Your Inspiration - IdeaStand. Taking a piece of IKEA’s simple product and making it more unique and custom with some DIY tricks to meet individual needs is an IKEA hacker’s duty and dream. 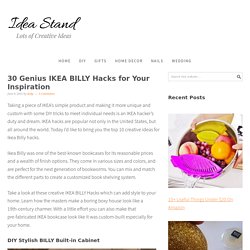 IKEA hacks are popular not only in the United States, but all around the world. Today I’d like to bring you the top 10 creative ideas for Ikea Billy hacks. Ikea Billy was one of the best-known bookcases for its reasonable prices and a wealth of finish options. They come in various sizes and colors, and are perfect for the next generation of bookworms.

You can mix and match the different parts to create a customized book shelving system. Besta climbs on Expedit. Besta Published on April 5th, 2011 | by Jules Yap Materials: Expedit, Besta Description: We decided to move around the furniture in our living room, to get more space around the couch. 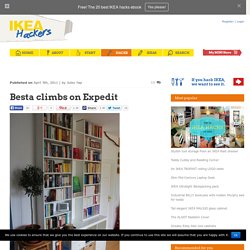 We ended up with the Expedit and the two Besta bookshelves, which didn’t really fit together, because of the different high and depth. So we had the idea to put the Bestas on top of the Expedit. DIY Bookcase Built Ins. In case you missed it: Part 1 | Part 2 | Part 3 Y’all. 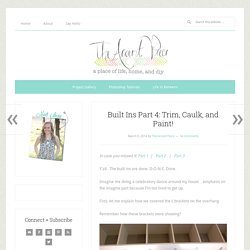 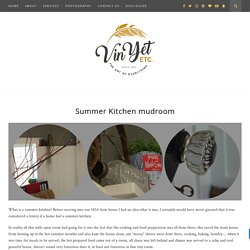 Before moving into our 1854 farm house I had no idea what it was, I certainly would have never guessed that it was considered a luxury if a home had a summer kitchen. In reality all this wide open room had going for it was the fact that the cooking and food preparation was all done there, this saved the main house from heating up in the hot summer months and also kept the house clean, any “messy” chores were done there, cooking, baking, laundry… when it was time for meals to be served, the hot prepared food came out of a room, all chaos was left behind and dinner was served to a calm and cool peaceful house, doesn’t sound very luxurious does it, at least not luxurious in that tiny room. What’s behind door number one Monty? The little room with so many doors… four in all, it felt like a comedy show when we first moved in, we were all coming and going every which way… which way to the carriage house? 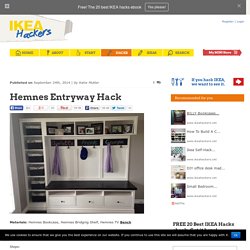 Adding Mudroom Built-Ins to the Garage - The Kim Six Fix. As part of my garage makeover plans I wanted to add a 'mudroom' to the back wall. 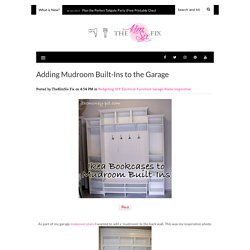 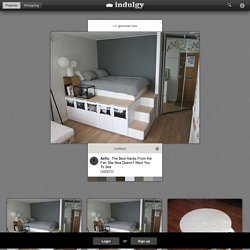 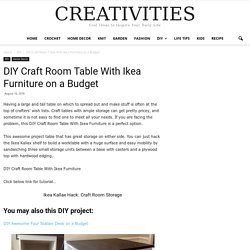 Craft tables with ample storage can get pretty pricey, and sometime it is not easy to find one to meet all your needs. If you are facing the problem, this DIY Craft Room Table With Ikea Furniture is a perfect option. Des bacs de rangement si pratiques! The Ranch We Love: Ikea Pax Wardrobe Wall. My favorite part of our new master bedroom addition is definitely the Ikea Pax Wardrobe wall. At first we considered a walk-in closet for the 18X18 room, but ended up going for more floor space by doing one wall with nothing but custom storage space, something this house desperately lacks. Ikea has a great website where you can build-your wardrobe from their free online software then print out the plans and items needed and take to the store to purchase.

The House of Normandy: Turning a Bookcase into a Banquette. We have a great dinning room table and it would have accommodated our family just fine....if we had stopped with 4 kids. My mission was to come up with an inexpensive, cute, semi-easy solution to our dinner table problem-o. I decided on a banquette. Building in Billy IKEA Hack - Southern Revivals. IHeart Organizing: Basement Progress: Studio Desk Part 4. We are almost done with the desk! Now it's all about "moving in" and organizing and putting on the finishing touches.

All the girly, fun touches. Best Of: IKEA Malm Series Hacks — Blue Door Living. It's amazing what you can do to IKEA furniture to make it look way over it's "assembled yourself" price tag. In my last IKEA hack, I turned the vittsjo shelving unit into a gold etagere using just paint. The MALM series is one of my favorite to see hacked with it's clean lines and endless possibility. Oh what a difference a little paint and new hardware can do to transform ubiquitous IKEA pieces into custom-made look-a-likes. DIY banquette design ADC x Le Bon Coin. Ikea Hackers : le concept que vous allez adorer ! - Elle Décoration. Built-in Bookshelves with RAST drawer base.