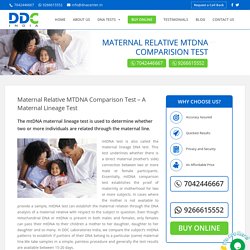 This test underlines whether there is a direct maternal (mother’s side) connection between two or more male or female participants. Essentially, mtDNA comparison test establishes the proof of maternity or motherhood for two or more subjects. In cases where the mother is not available to provide a sample, mtDNA test can establish the maternal relation through the DNA analysis of a maternal relative with respect to the subject in question.Even though mitochondrial DNA or mtDNA is present in both males and females, only females can pass their mtDNA to their children ­ a mother to her daughter, daughter to her daughter and so on… At DNA Diagnostics and Genetic Center India, we compare the subject’s mtDNA patterns to establish if portions of their DNA belong to a particular (same) maternal line.We take samples in a simple, painless procedure and generally the test results are available between 15­20 days. 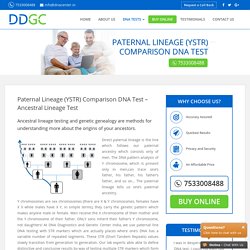 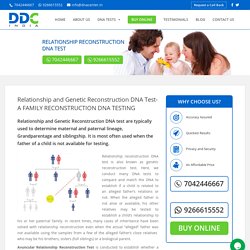 When the alleged father is not alive or available, his other relatives may be tested to establish a child’s relationship to his or her paternal family. In recent times, many cases of inheritance have been solved with relationship reconstruction even when the actual “alleged” father was not available using the samples from a few of alleged father’s close relatives ­ who may be his brothers, sisters (full siblings) or a biological parent. Avuncular Relationship Reconstruction Test is conducted to establish whether a child is related to his uncle or aunt ­ who is the sibling of the alleged father. Prenatal Paternity Test , Unborn child DNA Test - DNA Center India.

Enjoy the most precious phase of your life “pregnancy” by getting a Pre-natal DNA Paternity test. 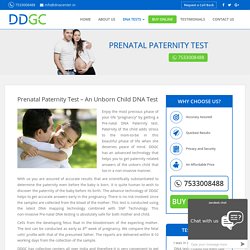 Paternity of the child adds stress to the mom-to-be in this beautiful phase of life when she deserves peace of mind. DDGC has an advanced technology that helps you to get paternity related answers of the unborn child that too in a non-invasive manner. With us you are assured of accurate results that are scientifically substantiated to determine the paternity even before the baby is born. It is quite human to wish to discover the paternity of the baby before its birth. The advance technology of DDGC helps to get accurate answers early in the pregnancy. AABB Accredited Immigration DNA Test for Visa - DNA Center India. Ancestry DNA Testing - DNA Diagnostics and Genetic Center. Commence unscrambling your past with our DNA test. 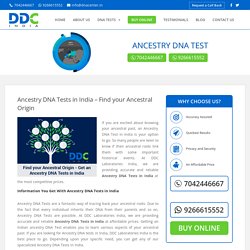 Find out your ancestry and get a comprehensive picture of your ancestry from a matchless genetic perspective. We will link your chromosomes to geographic regions and groups from where you belong.Just a simple test will link you to that remote part of your genealogical pre-history. Our ancestral DNA test is a unique test for those who are inquisitive about their past and want to dig deeper into their foundation. A team of experts conducts the test and accuracy is assured. We are an accredited laboratory and follow set procedures therefore the accuracy rate is quite high. How did you end up here? Ancestral DNA testing is the newest and most exciting addition to research. Order a kit and begin the journey into your past to trace your ancestral origin. There are four categories in the ancestral DNA testing and you could choose as per your requirement.

Grandparentage DNA Test – A Property Dispute DNA Test - DNA Center India. These days, more and more people are going in for these tests at our DNA Diagnostics and Genetic Center India. 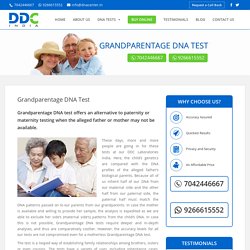 Here, the child’s genetics are compared with the DNA profiles of the alleged father’s biological parents. Because all of us inherit half of our DNA from our maternal side and the other half from our paternal side, the paternal half must match the DNA patterns passed on to our parents from our grandparents. In case the mother is available and willing to provide her sample, the analyses is expedited as we are able to exclude her side’s (maternal side’s) patterns from the child’s DNA.

In case this is not possible, Grandparentage DNA tests require deeper and in­ depth analyses, and thus are comparatively costlier. However, the accuracy levels for all our tests are not compromised even for a motherless Grandparentage DNA test. The test is a looped way of establishing family relationships among brothers, sisters or even cousins. DNA test for Donor relationship in India. A siblingship DNA test establishes whether two children have been born from the same parents or whether they are full or half siblings (brothers and sisters). 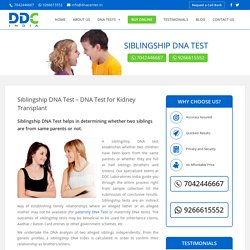 Our specialized teams at DNA Diagnostics and Genetic Center India guide you through the entire process ­ right from sample collection till the submission of conclusive results. Siblingship tests are an indirect way of establishing family relationships where an alleged father or an alleged mother may not be available (for paternity or maternity DNA tests). The outcomes of siblingship tests may be beneficial to be used for inheritance claims, Aadhar / Ration Card entries or other government schemes, etc. We undertake the DNA analysis of two alleged siblings independently. From the genetic profiles, a siblingship DNA Index is calculated in order to confirm their relationship as brothers / sisters. In both these tests, DNA strand patterns are compared with those of the alleged father(s) to establish siblingship. Maternity DNA Testing - DNA Diagnostics and Genetic Center. Paternity Trio DNA Test - DNA Diagnostics and Genetic Center.

At DNA Diagnostics and Genetic Center India, we have various configurations of paternity tests available. 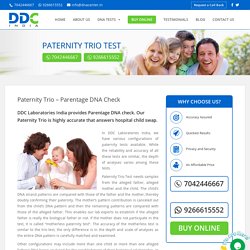 While the reliability and accuracy of all these tests is similar, the depth of analyses varies among these tests. Paternity Trio Test needs samples from the alleged father, alleged mother and the child. Confidential Paternity Test - DNA Diagnostics and Genetic Center. To underline the paternity of a child, a paternity test may be availed. 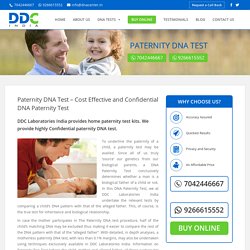 Since all of us truly ‘source’ our genetics from our biological parents, a DNA Paternity Test conclusively determines whether a man is a biological father of a child or not. In this DNA Paternity Test, we at DNA Diagnostics and Genetic Center India undertake the relevant tests by comparing a child’s DNA pattern with that of the alleged father. This of course, is the true test for inheritance and biological relationship.

In case the mother participates in Paternity DNA test procedure, half of the child’s matching DNA may be excluded thus making it easier to compare rest of the DNA pattern with that of the “alleged father”. With detailed, in ­depth analyses, a motherless paternity DNA test, with less than 0.1% margins, may also be undertaken using techniques exclusively available at DNA Diagnostics and Genetic Center India. AABB Accredited DNA Testing - DNA Diagnostics and Genetic Center.