A List of Don'ts for Women on Bicycles circa 1895. Floating Worlds: Edward Gorey's Never-Before-Seen Letters and Illustrated Envelopes. 7 Must-Read Books on Education. Education is something we’re deeply passionate about, but the fact remains that today’s dominant formal education model is a broken system based on antiquated paradigms. 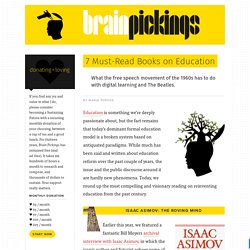 While much has been said and written about education reform over the past couple of years, the issue and the public discourse around it are hardly new phenomena. Today, we round up the most compelling and visionary reading on reinventing education from the past century. Earlier this year, we featured a fantastic Bill Moyers archival interview with Isaac Asimov, in which the iconic author and futurist echoes some of own beliefs in the power of curiosity-driven, self-directed learning and the need to implement creativity in education from the onset. Sir Ken Robinson’s blockbuster TED talks have become modern cerebral folklore, and for good reason — his insights on education and creativity, neatly delivered in punchy, soundbite-ready packages, are today’s loudest, most succinct rally cry for a much-needed revolution.

The Ancient Book of Sex and Science. By Maria Popova The alchemy of erotica, or what’s making Walt Disney blush in his grave. 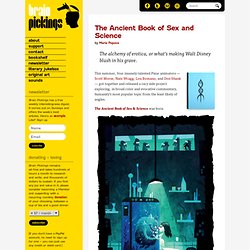 This summer, four insanely talented Pixar animators — Scott Morse, Nate Wragg, Lou Romano, and Don Shank — got together and released a racy side project exploring, in broad color and evocative commentary, humanity’s most popular topic from the least likely of angles. The Ghost Map: Lessons in Epidemiology from Victorian London. By Maria Popova What an ill Victorian infant has to do with the power of maps and the future of modern cities. 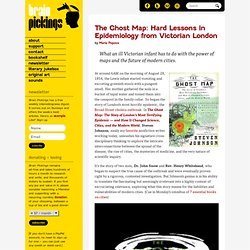 At around 6AM on the morning of August 28, 1854, the Lewis infant started vomiting and excreting greenish stools with a pungent smell. Her mother gathered the soils in a bucket of tepid water and tossed them into the cesspool in the family cellar. So began the story of London’s most horrific epidemic, the Broad Street cholera outbreak. 5 Timeless Commencement Addresses. By Maria Popova Gifts vs. choices, the benefits of failure, and what calligraphy has to do with Apple’s success. 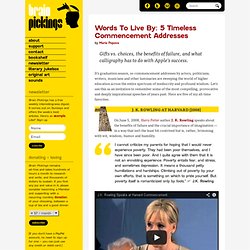 It’s graduation season, so commencement addresses by actors, politicians, writers, musicians and other luminaries are sweeping the world of higher education across the entire spectrum of mediocrity and profound wisdom. From Darth Vader to Jesus: Famous Lives in Minimalist Pictograms. By Maria Popova From the guillotine to lightsabers, or what vintage visual language has to do with pop culture. 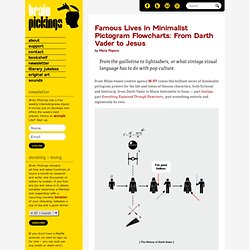 From Milan-based creative agency H-57 comes this brilliant series of minimalist pictogram posters for the life-and-times of famous characters, both fictional and historical, from Darth Vader to Marie Antoinette to Jesus — part Isotype, part Everything Explained Through Flowcharts, part something entirely and ingeniously its own.

Somewhere, Otto Neurath is rolling in his grave — hard to tell whether he’s laughing or crying. via First Floor Under Brain Pickings has a free weekly newsletter and people say it’s cool. Understanding Urbanity: 7 Must-Read Books About Cities. By Maria Popova What airports have to do with Medieval towns, Brooklyn’s bookstores and Le Corbusier. 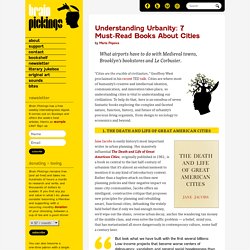 “Cities are the crucible of civilization,” proclaimed Geoffrey West at last month’s TED Global. Cities are where most of humanity’s creative and intellectual ideation, communication, and innovation takes place, so understanding cities is vital to understanding our civilization. To help do that, here is an omnibus of seven fantastic books exploring the complex and faceted nature, function, history, and future of urbanity’s precious living organism, from design to sociology to economics and beyond. Earth Day the TED Way. By Maria Popova Oceans, omnivores, and what babies have to do with design manifestos. 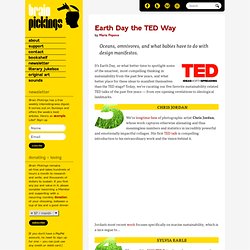 It’s Earth Day, so what better time to spotlight some of the smartest, most compelling thinking in sustainability from the past few years, and what better place for these ideas to manifest themselves than the TED stage? Today, we’re curating our five favorite sustainability-related TED talks of the past five years — from eye-opening revelations to ideological landmarks. We’re longtime fans of photographic artist Chris Jordan, whose work captures otherwise alienating and thus meaningless numbers and statistics in incredibly powerful and emotionally impactful collages. His first TED talk is compelling introduction to his extraordinary work and the vision behind it. Jordan’s most recent work focuses specifically on marine sustainability, which is a nice segue to… The Stanford Prison Experiment Turns 40.

By Maria Popova Insights on identity and the aberrations of authority from the most notorious psychology experiment of all time. 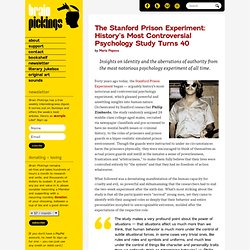 Forty years ago today, the Stanford Prison Experiment began — arguably history’s most notorious and controversial psychology experiment, which gleaned powerful and unsettling insights into human nature. Orchestrated by Stanford researcher Philip Zimbardo, the study randomly assigned 24 middle-class college-aged males, recruited via newspaper classifieds and pre-screened to have no mental health issues or criminal history, to the roles of prisoners and prison guards in a hyper-realistic simulated prison environment. 50 Famous Scientists on God, Part 2. Illustrated Portraits by 80 of the World's Most Exciting Artists. By Maria Popova. 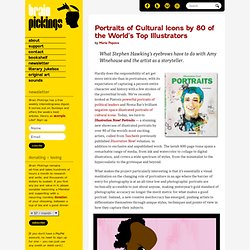 Animating Reality: A Collection of Short Animated Documentaries. Bruce Gilden on the Other Side of The Camera. By Maria Popova What Coney Island mobsters have to do with Haiti and the smell of New York City streets. 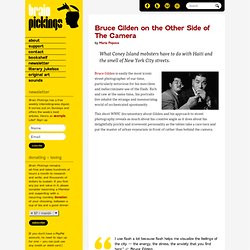 Digital Humanities Spotlight: 7 Important Digitization Projects. By Maria Popova From Darwin’s marginalia to Voltaire’s correspondence, or what Dalí’s controversial World’s Fair pavilion has to do with digital myopia. Despite our remarkable technological progress in the past century and the growth of digital culture in the past decade, a large portion of humanity’s richest cultural heritage remains buried in analog archives. Bridging the disconnect is a fledgling discipline known as the Digital Humanities, bringing online historical materials and using technologies like infrared scans, geolocation mapping, and optical character recognition to enrich these resources with related information or make entirely new discoveries about them.

As Europe’s digital libraries open up their APIs, techno-dystopian pundits lament that these efforts diminish “the mystery of history,” but such views are myopic and plagued by unnecessary nostalgia for a time when knowledge was confined to the privileged cultural elite. Donating = Loving Share on Tumblr. Where children sleep, the radioactive orchestra, 7 important digitization projects and more. Hey there! If you missed last week's edition – 10 essential books on typography, visualizing creative influence across time and more – you can catch up right here. And if you're enjoying this, please consider supporting with a modest donation. Where Children Sleep: James Mollison's Poignant Photographs. Need to Want Less: Modern Philosophy via Graphic Design. By Maria Popova What Facebook and the food pyramid have to do with our deep desire for self-acceptance.

The disconnect between our wants and needs is one of the most fundamental and universal paradoxes of being human. Virtually everyone comes in contact with it in various levels of intensity. That piece of rich flourless chocolate cake after a perfectly healthy and nourishing meal. Mad Men: The Illustrated World. By Maria Popova Tips for the modern metrosexual from the 1960s, or what martinis have to do with Twitter. Yes, we love Mad Men goodies, who doesn’t? Nearly two years ago, we featured NYC-based illustrator, designer and comedian Dyna Moe‘s absolutely wonderful Mad Men illustrations. The series eventually charmed AMC into launching the popular Mad Men Yourself app, which has since populated countless Twitter streams with Mad-Menified avatars.

How Music and Language Mimicked Nature to Evolve Us. William Kentridge: Anything Is Possible. By Maria Popova. South African Township Barbershops & Salons. The Scale of the Universe, Five Ways. Rare Early Photographs of Musicians Around the World. Ethnic Diversity in Russia 100 Year Ago, In Color. Brain Bugs: How the Brain's Flaws Shape Our Lives. Tony Orrico, Human Spirograph. Ai Weiwei: Without Fear or Favour, a BBC Documentary. Jazz: A Rare Record of a Cultural Revolution.

The Holstee Manifesto: Making The Life You Want To Live. How Music Works. What Does It Mean to Be Human? E. chromi: Designer Bacteria for Color-Coded Disease Detection. Designing Minds: Uncovered Video Profiles of Prominent Designers. Incognito: David Eagleman Unravels the Secret Lives of the Brain. Thxthxthx: The Art of Finding Happiness in Everyday Gratitude. 7 Must-Read Books on the Art & Science of Happiness.

7 Ways to Have More by Owning Less. 7 Image Search Tools That Will Change Your Life.

Related:  Studies in consciousness   -  7 Must-Read Books on the Art & Science of Happiness   -  7 Image Search Tools That Will Change Your Life   -  Education   -  Enterprise