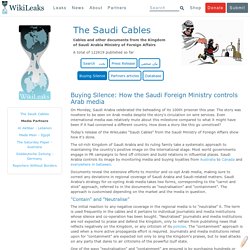 The story was nowhere to be seen on Arab media despite the story's circulation on wire services. Even international media was relatively mute about this milestone compared to what it might have been if it had concerned a different country. How does a story like this go unnoticed? Reporting Saudi Arabia's hidden uprising. 30 May 2014Last updated at 10:31 ET. 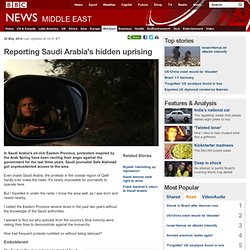 Nayef as King: The Pragmatic Conservative. Prince Nayef has rapidly ascended the ranks of the Saudi monarchy. 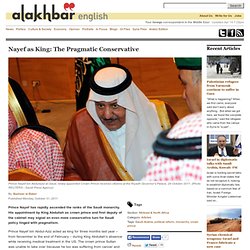 His appointment by King Abdullah as crown prince and first deputy of the cabinet may signal an even more conservative turn for Saudi policy tinged with pragmatism. Prince Nayef bin Abdul-Aziz acted as king for three months last year – from November to the end of February – during King Abdullah’s absence while receiving medical treatment in the US. The crown prince Sultan was unable to take over because he too was suffering from cancer and memory loss. Although Sultan cut short his convalescence period in Agadir, Morocco and returned to the country as soon as the king left, his presence was symbolic and he only appeared in public on a few occasions.

Nayef remained in command as decision maker. Even the Governor of Riyadh, Prince Salman bin Abdul-Aziz, regarded as the strongest leader after Nayef, did not play a prominent role, because he was by his brother Sultan’s side and was also ill himself. Saudi Arabia: Poverty Video Vloggers Released. Tweeted picture of Firas with his little brothers after getting released Around two weeks ago, Saudi Arabia arrested three young video bloggers Firas Buqna, Hussam Al-Darwish and Khaled Al-Rasheed for producing an episode of their show Malub Alena about poverty in one of Riyadh's areas. 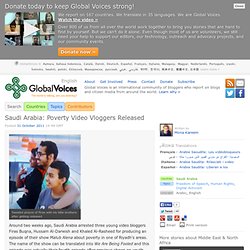 The name of the show can be translated into We Are Being Fooled and this episode was actually their fourth episode after previous shows on youth and police corruption. Before the arrests, the show was having a good number of views but in few days after their arrests, it was viewed for more than 600,000 times. Here's a copy of the video, with English subtitles, from YouTube: 'Monopoly': A YouTube sensation knocks Saudi royalty. The Arab Spring has yet to touch down on the sands of Saudi Arabia, and advocates face an uphill battle mobilizing an apathetic general public that seems to accept the country's all-powerful monarchy. 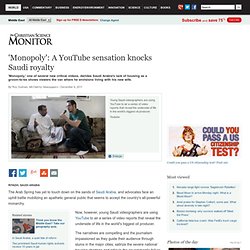 Skip to next paragraph Subscribe Today to the Monitor Click Here for your FREE 30 DAYS ofThe Christian Science MonitorWeekly Digital Edition. @Mujtahidd: Tweeting the Saudi Elite’s Secrets. With over 200,000 followers, many Saudis have already heard of @Mujtahidd. 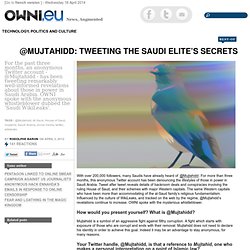 For more than three months, this anonymous Twitter account has been denouncing the lifestyles of those in power in Saudi Arabia. Tweet after tweet reveals details of backroom deals and conspiracies involving the ruling House of Saud, and their schemes with major Western capitals. Saudi police open fire on civilians as protests gain momentum - Middle East, World. Saudi Arabia last night confirmed there had been fighting in the region and that 11 security personnel and three civilians had been injured in al-Qatif, a large Shia city on the coast of Saudi Arabia's oil-rich Eastern Province. 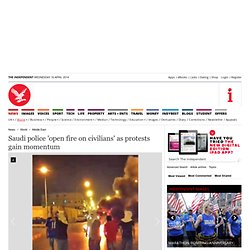 The opposition say that 24 men and three women were wounded on Monday night and taken to al-Qatif hospital. The Independent has been given exclusive details of how the protests developed by local activists. They say unrest began on Sunday in al-Awamiyah, a Shia town of about 25,000 people, when Saudi security forces arrested a 60-year-old man to force his son – an activist – to give himself up. Saudi Arabia's Political Prisoners: Towards a Third Decade of Silence. The #women2drive Daily. Saudi Arabia tightens hold on the media. JEDDAH Sat Apr 30, 2011 2:48am IST JEDDAH (Reuters) - Saudi Arabia tightened its control of the media on Friday, threatening fines and closure of publications that jeopardised its stability or offended clerics, state media reported. 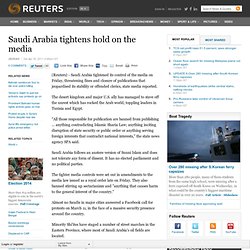 The desert kingdom and major U.S. ally has managed to stave off the unrest which has rocked the Arab world, toppling leaders in Tunisia and Egypt. "All those responsible for publication are banned from publishing ... anything contradicting Islamic Sharia Law; anything inciting disruption of state security or public order or anything serving foreign interests that contradict national interests," the state news agency SPA said. Saudi Arabia follows an austere version of Sunni Islam and does not tolerate any form of dissent. It has no elected parliament and no political parties. The tighter media controls were set out in amendments to the media law issued as a royal order late on Friday.

(Reporting by Asma Alsharif; editing by Andrew Heavens) Women united for vote in Saudi Arabia. Heba Al Butairi in Khobar has become a trailblazer for the campaign. 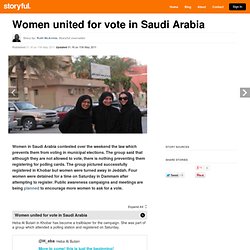 She was part of a group which attended a polling station and registered on Saturday. I have still not fully absorbed the magnitude of what we did. Women in Saudi Arabia 'to vote and run in elections' 25 September 2011Last updated at 11:12 ET. 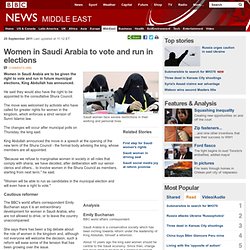 A Declaration of Reform (translation) I know I said don’t expect what happened in Tunisia and Egypt to happen in Saudi Arabia anytime soon. But I also added that things are happening. In addition to the buzz in social media, the past week has seen the release of several statements and open letters demanding reform. There was a statement titled “Toward the State of Rights and Institutions,” and it was signed initially by more than 1500 people, including prominent names such as Sheikh Salman al-Auda. The statement was put up online on a website calling people to sign it if they agree with its premise. The website was blocked few days later, which could be an indicator of how the government feels about this.