Should Twitter, Facebook and Google Executives be the Arbiters of What We See and Read? 2012 in Review: How Blasphemy Laws Are Stifling Free Expression Worldwide. Tracking suppression of online free speech. Turkey: Journalists’ Arrests Chills Free Speech. (Istanbul) - The arrest of nine journalists and writers on March 3, 2011, in the absence of clear reasonable cause, will have a chilling effect on free speech, Human Rights Watch said. 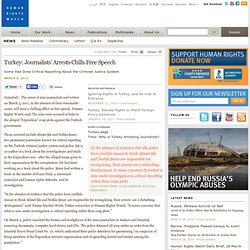 The nine were accused of links to the alleged "Ergenekon" coup plots against the Turkish government. Those arrested include Ahmet Şık and Nedim Şener, two prominent journalists known for critical reporting on the Turkish criminal justice system and police. Mozambique: Behind the Detention of MC Azagaia · Global Voices. Take action to end impunity. By Alice Purkiss / 23 November, 2011 To mark the inaugural International Day to End Impunity on 23 November, join Index in demanding justice for journalists’ murdered in the line of duty Freedom of Expression Organisations Call for Justice on International Day to End Impunity London, November 23, 2011 Today Index on Censorship, Article 19, the Committee to Protect Journalists and English PEN join dozens of freedom of expression organisations around the world to mark the inaugural International Day to End Impunity. 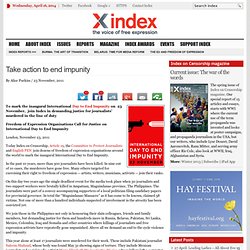 In the past 10 years, more than 500 journalists have been killed. US students convicted for disrupting speech - Americas. Ten US college students from Southern California have been convicted of unlawfully disrupting a speech by Israel's ambassador to the US last year and placed on probation. 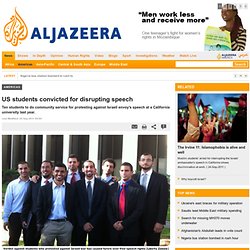 Friday's verdict followed two full days of deliberations by a six-man, six-woman jury in a case that has touched off a furore over free-speech rights at the University of California at Irvine. The students, who were ordered to perform 56 hours of community service, are to remain on probation for three years. Full video: The Irvine 11: young Muslims speaking the truth against Israeli ambassador/warcimes. Knoxnews. Photo by Emily Spence, copyright © 2008 // Buy this photo. 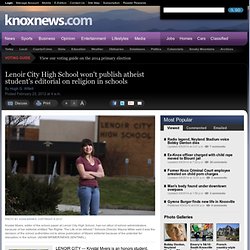 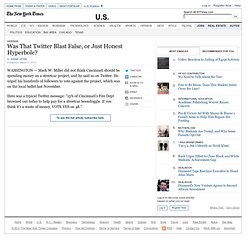 If you think it’s a waste of money, VOTE YES on 48.” Mr. Miller, 46, a mechanical engineer, said he expected a debate. What he got instead was a legal action from supporters of the streetcar project under an Ohio law that forbids false statements in political campaigns. In the end, Mr. OCCUPY WALL STREET BEST MSM Footage NYPD Police Brutality. Man Arrested for Wearing Occupy Jacket at Supreme Court. An Important Video to Watch: Pepper-Spray by a Cruel and Cowardly NYC Cop - James Fallows - National. 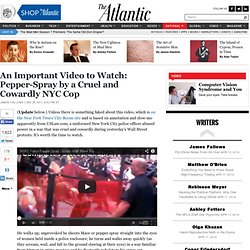 Unless there is something faked about this video, which is on the New York Times' City Room site and is based on annotation and slow-mo apparently from USLaw.com, a uniformed New York City police officer abused power in a way that was cruel and cowardly during yesterday's Wall Street protests. It's worth the time to watch. He walks up; unprovoked he shoots Mace or pepper spray straight into the eyes of women held inside a police enclosure; he turns and walks away quickly (as they scream, wail, and fall to the ground clawing at their eyes) in a way familiar from hitmen in crime movies; and he discreetly reholsters his spray can. NYPD Arrests 700 #OccupyWallStreet Protesters On The Brooklyn Bridge.

Thai censorship critic strikes back at snitch Web host. In May 2006, Anthony Chai, a naturalized United States citizen from Thailand, took a flight back to the land of his birth to catch up with relatives and friends. 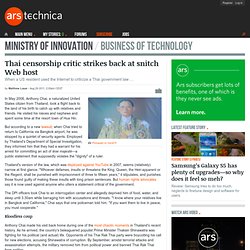 Secret Agents Raid Webcam Artist. 8 July 2011Last updated at 15:54 The US Secret Service has raided the home of an artist who collected images from webcams in a New York Apple store. Kyle McDonald is said to have installed software that photographed people looking at laptops then uploaded the pictures to a website. Mr McDonald said he had obtained permission from a security guard to take photos inside the store. Apple declined to comment. However, the Secret Service confirmed that its electronic crime division was involved. Massacre victim’s widow flees Philippines. The widow of a journalist who was among the 57 people killed in the grisly 2009 Maguindanao massacre has fled to Hong Kong, saying the Philippine government had failed to provide her protection. 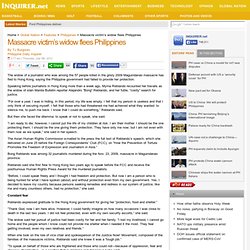 Speaking before journalists in Hong Kong more than a week ago, Myrna Reblando recounted her travails as the widow of slain Manila Bulletin reporter Alejandro “Bong” Reblando, and her futile, “costly” search for justice. Russia: Pussy Riot Doomed by Its Own Supporters? This post is part of our special coverage Russia's Protest Movement. 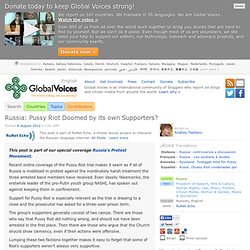 Recent online coverage of the Pussy Riot trial makes it seem as if all of Russia is mobilized in protest against the inordinately harsh treatment the three arrested band members have received. Pakistan bans 'obscene' words on cell phone texts. Dissidentity - Dissident thought and multiple identities/nyms. 1st Circuit Ponders a First Amendment Right to Videotape an Arrest. The War on Talking About the Drug War. Chilling Effects Clearinghouse - www.chillingeffects.org.