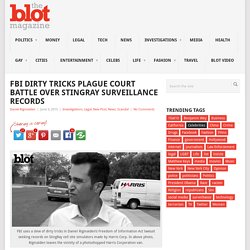 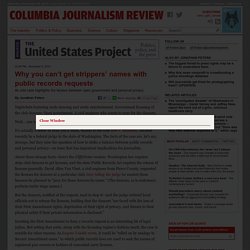 Revealed: The 95 FOIA Requests Flagged for Pentagon Approval. A few weeks ago, the nonpartisan organization Cause of Action posted a story on its website about a secret Pentagon policy that calls for certain Freedom of Information Act (FOIA) requests that may generate media attention to first be approved by the Pentagon. 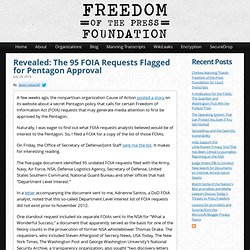 Naturally, I was eager to find out what FOIA requests analysts believed would be of interest to the Pentagon. So, I filed a FOIA for a copy of the list of those FOIAs. On Friday, the Office of Secretary of Defense/Joint Staff sent me the list. It makes for interesting reading. The five-page document identified 95 undated FOIA requests filed with the Army, Navy, Air Force, NSA, Defense Logistics Agency, Secretary of Defense, United States Southern Command, National Guard Bureau and other offices that had “Department Level Interest.” US cites security more to censor, deny records. WASHINGTON (AP) — The Obama administration more often than ever censored government files or outright denied access to them last year under the U.S. 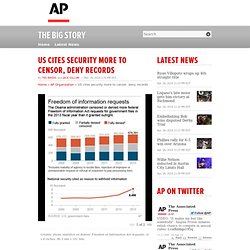 Freedom of Information Act, according to a new analysis of federal data by The Associated Press. The administration cited more legal exceptions it said justified withholding materials and refused a record number of times to turn over files quickly that might be especially newsworthy. Most agencies also took longer to answer records requests, the analysis found. The government's own figures from 99 federal agencies covering six years show that half way through its second term, the administration has made few meaningful improvements in the way it releases records despite its promises from Day 1 to become the most transparent administration in history.

Obama Administration Official Whitewashes Truth About FOIA. Last week, as she does every year around Sunshine Week, Melanie Pustay went to The Hill and testified before a congressional committee about how great government agencies haven been doing responding to Freedom of Information Act (FOIA) requests and providing requesters with responsive records. 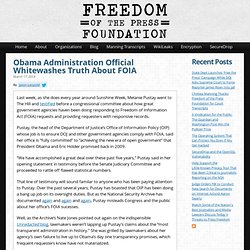 Pustay, the head of the Department of Justice’s Office of Information Policy (OIP) whose job is to ensure DOJ and other government agencies comply with FOIA, said her office is “fully committed” to “achieving the new era of open government” that President Obama and Eric Holder promised back in 2009. “We have accomplished a great deal over these past five years,” Pustay said in her opening statement in testimony before the Senate Judiciary Committee and proceeded to rattle off flawed statistical numbers.

That line of testimony will sound familar to anyone who has been paying attention to Pustay. But it gets worse. NSA Rejecting Every FOIA Request Made by U.S. Citizens. Originally published at Tikkun Daily | Clayton Seymour, a 36-year-old IT specialist from Hilliard, Ohio, recently sent a Freedom of Information Act (FOIA) request to the NSA, curious as to whether any data about him was being collected. 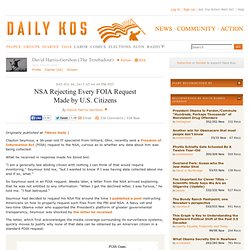 What he received in response made his blood boil. "I am a generally law abiding citizen with nothing I can think of that would require monitoring," Seymour told me, "but I wanted to know if I was having data collected about me and if so, what. " So Seymour sent in an FOIA request. Weeks later, a letter from the NSA arrived explaining that he was not entitled to any information.

Seymour had decided to request his NSA file around the time I published a post instructing Americans on how to properly request such files from the FBI and NSA. The letter, which first acknowledges the media coverage surrounding its surveillance systems, quickly moves to justify why none of that data can be obtained by an American citizen in a standard FOIA request: Unjustly so. Cyberactivist Aaron Swartz's Legacy of Open Government Efforts Survives. 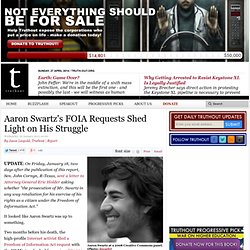 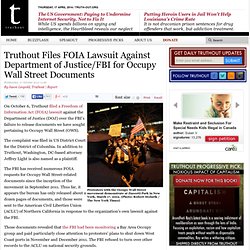 (Photo: Robert Stolarik / The New York Times)On October 6, Truthout filed a Freedom of Information Act (FOIA) lawsuit against the Department of Justice (DOJ) over the FBI's failure to release documents we have sought pertaining to Occupy Wall Street (OWS). The complaint was filed in US District Court for the District of Columbia. In addition to Truthout, Washington, DC-based attorney Jeffrey Light is also named as a plaintiff.

The FBI has received numerous FOIA requests for Occupy Wall Street-related documents since the inception of the movement in September 2011. Thus far, it appears the bureau has only released about a dozen pages of documents, and those were sent to the American Civil Liberties Union (ACLU) of Northern California in response to the organization's own lawsuit against the FBI. Light filed a request for similar documents in mid-November 2011. NYTimes Sues The Federal Government For Refusing To Reveal Its Secret Interpretation Of The PATRIOT Act.