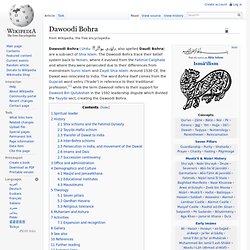 The Dawoodi Bohra trace their belief system back to Yemen, where it evolved from the Fatimid Caliphate and where they were persecuted due to their differences from mainstream Sunni Islam and Zaydi Shia Islam. Around 1530 CE, the Dawat was relocated to India. 53rd Syedna succession controversy (Dawoodi Bohra) The Mufaddal Saifuddin succession controversy[1] refers to the ongoing crisis in the Dawoodi Bohra community where a rival claimant has emerged after the death of Syedna Mohammed Burhanuddin to claim the title of 53rd Dā'ī al-Mutlaq of Dawoodi Bohra. 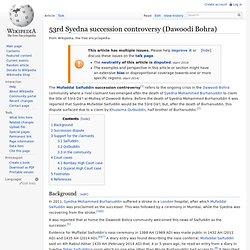 Fatimid Caliphate. The Fatimid Caliphate (Arabic: الفاطميون, al-Fāṭimiyyūn) was a Shia caliphate, which spanned a large area of North Africa, from the Red Sea in the east to the Atlantic Ocean in the west. 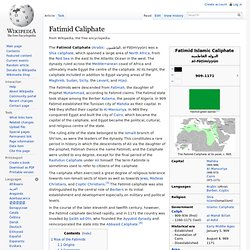 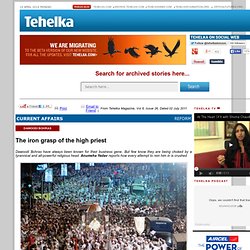 But few know they are being choked by a tyrannical and all-powerful religious head. Anumeha Yadav reports how every attempt to rein him in is crushed THE BOHRA Muslims have always been read through a dominant stereotype: their capacity for business. That’s probably one reason why even chief minister Narendra Modi has found it convenient to reach out to them as part of his PR measures to improve his scoreboard with Muslims in Gujarat. This story is not a new one. Traditional architecture: House form of Bohras in Gujarat - dawoodi-bohras.com. Categories: features Date: September 17, 2008 Title: Traditional architecture: House form of Bohras in Gujarat The history of architecture in India reflects a rich and diversified legacy, not only through the classical examples but also in the display of a rich heritage of vernacular traditions of building. 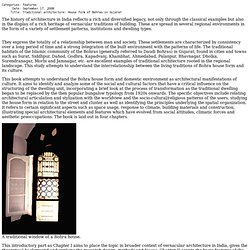 These are spread in several regional environments in the form of a variety of settlement patterns, institutions and dwelling types. They express the totality of a relationship between man and society. These settlements are characterized by consistency over a long period of time and a strong integration of the built environment with the patterns of life. This book attempts to understand the Bohra house form and domestic environment as architectural manifestations of culture.

A traditional window of a Bohra house. There are two broad categories of Bohrwads: one has an organic layout while the other is strictly geometrically laid out. Facade of a house in Kapadvanj. Want to buy this book? Publication &gt; Traditional Bohra Dwellings of Gujarat by Madhavi Desai. This book explores the Bohra house form and domestic environment as architectural manifestations of culture.

The traditional habitats of the Islamic community of the Bohras (generally referred to Daudi Bohras) in Gujarat are excellent examples of traditional architecture rooted in the regional landscape. It aims to identify and analyze some of the social and cultural factors that have a critical influence on the structuring of the dwelling unit, with a brief look at the process of transformation as the traditional dwelling began to be replaced by the then popular bungalow typology from 1920s onwards.

The houses in a Bohrwad are typically grouped around a street and these form a mohalla ; several mohallas form a Bohrwad. Besides the houses, a large Bohrwad generally contains a mosque, a Madressa, a Jamat Khana, and other buildings for collective functions. DesaiArchPlates.PDF (application/pdf Object) Mustalis [Bohras or Bohri] with Tayyibi Ismailism. Among the Shias of India the Ithna-Asharis are in the majority while the Khojas and Bohras of Western and Central India belong to the two internal divisions of the Isma`ili group of Muslims - the Nizaris [Khojas] with Satpanth Ismailism and the the Musta'lis [Bohras or Bohri] with Tayyibi Ismailism.

Most bohras are Daudi [Dawoodi] Ismailis.The Bohras have their headquarters in Mumbai (formerly Bombay), India. The bohras are am ethnic group in India and Pakistan, originally a hindu caste -- Bohri Muslims were originally Brahmins.