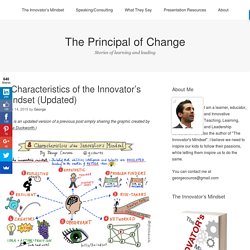 Image created by @SylviaDuckworth Recently I explored the notion of the “Innovator’s Mindset”, and have thought a lot about this idea. As I look to write on the topic of “Leading Innovative Change” within schools, we are looking to develop educators as innovators. To be innovative, you have to look at yourself as an innovator first, and to create schools that embody this mindset as a “culture”, we must develop this in individuals first. Building upon Carol Dweck’s work, I have been looking at the traits of the “Innovator’s Mindset”, which would be summarized as follows: Innovator's Mindset_Mtg 3 - Google Slides. Sketchnoting. 10 Brilliant Examples Of Sketch Notes: Notetaking For The 21st Century. Sketch notes–or graphic notes, or whatever other term you like–are one of the single most important developments in note-taking history. 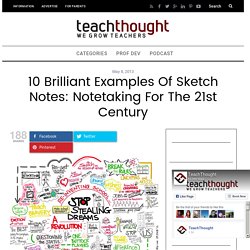 Hold on, give me a second to explain. Exactly why they matter has something to do with the way our brains work, and the explosion of technology, and a little bit of viral success. Padlet Tips. Book Study Padlets. Google Slides - create and edit presentations online, for free. How are you actively sharing your learning with your school and global community?