Winston Churchill: greatest British hero or a warmongering villain? Sir Winston Churchill, a journalist, a soldier, and a war-time leader, was a maverick who divided opinion throughout his lengthy political career. 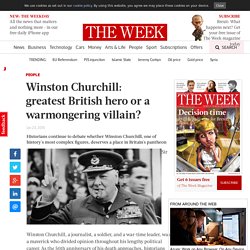 As the 50th anniversary of his death approaches, historians and journalists appear no closer to agreeing on his legacy. We weigh up the leading arguments on both sides. Churchill as hero: Churchill is widely regarded as one of the greatest war-time leaders Europe has ever seen, inspiring the Allies to victory in the Second World War. "It was his inspiration that prevented Britain from joining the rest of Europe in surrendering to the might of Nazi Germany," argues British historian Max Hastings in the Daily Mail. He was also responsible for fostering the "special relationship" between the UK and the US, which continues today, and alerting the West to the burgeoning post-war threat of Soviet communism in his infamous "Iron Curtain" speech.

Churchill received numerous awards, honours and medals throughout his lifetime. Winston S. Churchill - British History. “I have nothing to offer but blood, toil, tears and sweat,” Churchill told the House of Commons in his first speech as prime minister. 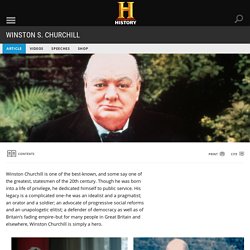 “We have before us many, many long months of struggle and of suffering. You ask, what is our policy? I can say: It is to wage war, by sea, land and air, with all our might and with all the strength that God can give us; to wage war against a monstrous tyranny, never surpassed in the dark, lamentable catalogue of human crime. That is our policy. You ask, what is our aim? Just as Churchill predicted, the road to victory in World War II was long and difficult: France fell to the Nazis in June 1940. Though Churchill was one of the chief architects of the Allied victory, war-weary British voters ousted the Conservatives and their prime minister from office just two months after Germany’s surrender in 1945. 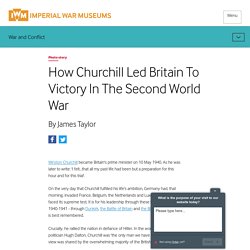 As he was later to write: 'I felt...that all my past life had been but a preparation for this hour and for this trial'. On the very day that Churchill fulfilled his life's ambition, Germany had, that morning, invaded France, Belgium, the Netherlands and Luxembourg. Britain faced its supreme test. It is for his leadership through these fraught years of 1940-1941 - through Dunkirk, the Battle of Britain and the Blitz - that Churchill is best remembered.

Crucially, he rallied the nation in defiance of Hitler. Less obviously, Churchill made planning and decision-making - both political and military - simpler and more efficient. In July 1945, with Nazi Germany defeated and Japan near to collapse, Churchill's Conservative Party lost a general election in a landslide victory for Labour. World War II - Winston Churchill's Finest Hour. "Never Give In! 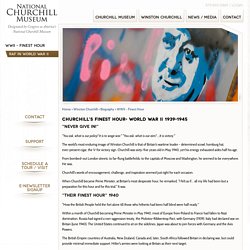 " "You ask, what is our policy? It is to wage war. " "You ask, what is our aim? ...It is victory. " The world's most enduring image of Winston Churchill is that of Britain's wartime leader - determined scowl, homburg hat, ever-present cigar, the V-for victory sign. From bombed-out London streets ,to far-flung battlefields, to the capitals of Moscow and Washington, he seemed to be everywhere. Churchill's words of encouragement, challenge, and inspiration seemed just right for each occasion. When Churchill became Prime Minister, at Britain's most desperate hour, he remarked, "I felt as if... all my life had been but a preparation for this hour and for this trial.

" "Their Finest Hour" 1940 "How the British People held the fort alone till those who hitherto had been half blind were half ready. " Within a month of Churchill becoming Prime Minister in May 1940, most of Europe from Poland to France had fallen to Nazi domination. Blitz on London "The Grand Alliance" 1941.