LONG BUT BRILLIANT... 70 years and half a trillion dollars later: what has the UN achieved? It was Dag Hammarskjöld, the tragic second UN secretary general, who had it best. 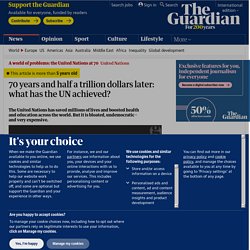 The United Nations, he said, “was created not to lead mankind to heaven but to save humanity from hell”. The kind of hell Hammarskjöld had in mind was not hard to imagine in the wake of world war and Hitler’s extermination camps, and with the atom bomb’s shadow spreading across the globe. How much of a part the UN played in holding nuclear armageddon at bay divides historians. But there is little doubt that in the lifetime that has passed since it was set up in 1945 it helped save millions from other kinds of hell. From the deepest of poverty. The UN’s children’s organisation, Unicef, provided an education and a path to a better life for millions, including the present UN secretary general, Ban Ki-moon. 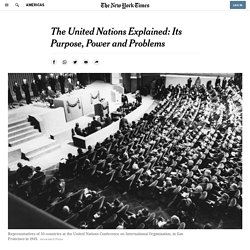 But how many people know what it actually does? Or how it works? UN at 70: Five greatest successes and failures. But here are some pointers in both directions. 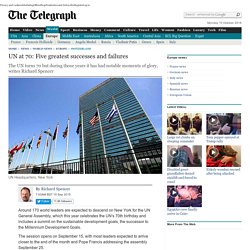 Successes Peace Prosecutions of Charles Taylor and Slobodan Milosevic The Liberian and Serbian leaders were both prosecuted for war crimes by tribunals set up by the United Nations, with Taylor sentenced to 50 years’ imprisonment. Milosevic died of a heart attack before a verdict was reached, but the precedent that dictators can face impartial, rather than victors’, justice has been established. Slobodan Milosevic Ending famine The world is an unequal place, with large parts beset by poverty and hunger, and thousands still die of malnourishment every year. South Africa, Kazakhstan, and the other countries who gave up The Bomb Never before in history have countries voluntarily decided to give up weapons because they were too efficient. Protecting the Galapagos Islands … ... and 1,000 other World Heritage sites. 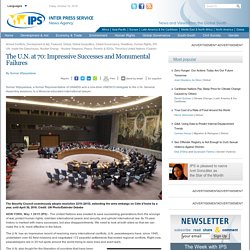 General Assembly sessions, is a Moscow-educated international lawyer. The Security Council unanimously adopts resolution 2219 (2015), extending the arms embargo on Côte d’Ivoire by a year, until April 30, 2016. Credit: UN Photo/Eskinder Debebe. 70 Years of Successful Security and Fatal Failures at the UNSC. With the UN Security Council approaching the 70th anniversary of its first meeting on January 17th, it seems a fitting time to look back and reflect on how well it has achieved its mandate, and how that mandate has evolved to accommodate new threats. 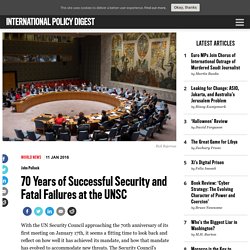 The Security Council’s prime function has been to tackle threats to peace and security throughout the world. On a macro scale, one could say the Security Council has indeed done a more than serviceable job. According to a study by Harvard professor Steven Pinker, we are living in the most peaceful time in human history. In this moment an individual is less likely to die during armed combat than in any other moment since the rise of civilization.

It is not a stretch to suggest that the Security Council, an organization brought about to help create a more peaceful world, played a major role in bringing about the relative peace the world enjoys today. Obviously they cannot claim all of the credit for the successes in areas under their purview. What have been the successes and failures of UN peacekeeping missions? Where peacekeepers have succeeded - and failed Srebrenica On July 11, 1995, towards the end of Bosnia's 1992-95 war, Bosnian Serb forces swept into the eastern Srebrenica enclave and executed 8,000 Muslim men and boys in the days that followed, dumping their bodies into pits. 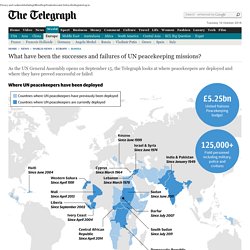 It was the worst massacre in post-Second World War European history. The UN had previously declared the town one of the safe areas, to be "free from any armed attack or any other hostile act". 600 Dutch infantry were supposed to be protecting thousands of civilians who had taken refuge from earlier Serb offensives in north-eastern Bosnia. As Serb forces began shelling Srebrenica, Bosnian Muslim fighters in the town asked for the return of weapons they had surrendered to the UN peacekeepers but their request was refused. What Does The United Nations Do Anyway?  The 7 Worst Things The UN Has Ever Done. The United Nations has long been a failed international organization whose words rarely match its actions. 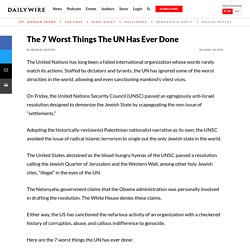 Staffed by dictators and tyrants, the UN has ignored some of the worst atrocities in the world, allowing and even sanctioning mankind’s vilest vices. On Friday, the United Nations Security Council (UNSC) passed an egregiously anti-Israel resolution designed to demonize the Jewish State by scapegoating the non-issue of “settlements.” Prezi on the UN.