Death by monoculture. The 21st century is the make-or-break century for cultural and linguistic diversity, and for the future of human civilisation per se. 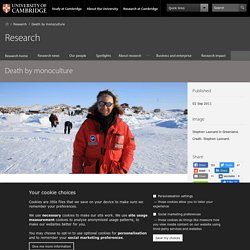 An unprecedented and unchecked growth in the world’s population, combined with the insistence on exploiting finite resources, will lead to environmental and humanitarian catastrophes as mass urbanisation meets fundamental problems such as the lack of drinking water. The actions that we collectively take over the next fifty years will determine how and if we can overcome such global challenges, and what the shape of the ‘ethnosphere’ or ‘sum of the world’s cultures’ is to look like in years to come.

After having spent a year in a remote Arctic community which speaks a vulnerable, minority language and whose cultural foundations are being rocked by climate change, it is clear to me that the link between environmental and cultural vulnerability is genuine and that the two are interwoven. Consumerism has now made it to every corner of the world. Beyond the Monoculture: Strengthening Local Culture, Economy and Knowledge « Journal of Sustainability Education. March 19th, 2012By Helena Norberg-Hodge In this deeply cohesive and fundamentally geographic argument, Helena Norberg-Hodge brings an impressive array of sustainability issues under a single guiding rubric for educating and changing society—the need for a shift from globalised systems to local practice. 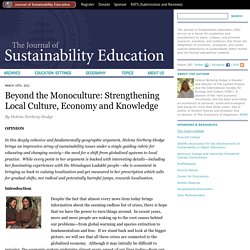 While every point in her argument is backed with interesting details—including her fascinating experiences with the Himalayan Ladakhi people—she is consistent in bringing us back to valuing localisation and yet measured in her prescription which calls for gradual shifts, not radical and potentially harmful jumps, towards localisation. Introduction Despite the fact that almost every news item today brings information about the seeming endless list of crises, there is hope that we have the power to turn things around.

In recent years, more and more people are waking up to the root causes behind our problems—from global warming and species extinction to fundamentalism and fear. Conclusion. Does globalization mean we will become one culture? - BBC Future. Globalization and Culture: The Three H Scenarios. 1. Introduction Transnational flows of people, financial resources, goods, information and culture have recently been increasing in a drastic way and have profoundly transformed the world (Ritzer and Malone, 2001). This phenomenon has been labeled globalization. As a result, a great deal of debate and discussion, even controversy (Bird and Stevens, 2003) has taken place about globalization in various disciplines from different angles.

In fact, there seems to be a controversy in regards to globalization and the contradictory meanings associated with it. Globalization is a multidimensional phenomenon that encompasses not only economic components but also cultural, ideological, political and similar other facets (Prasad and Prasad, 2006). In an increasingly borderless world impacted by a globalization of economies, the preservation of cultural diversity feeds contrary and controversial reactions. 2. 3. A worthwhile observation is the fact that culture is not rigid. 4. 5. 6. 7. 8. Globalization and culture. Culture is a dynamic force for change rather than a rigid set of forms or parameters that must be strictly adhered to. 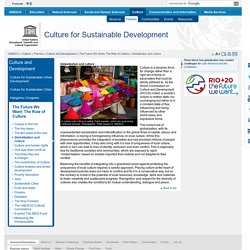 As the World Commission on Culture and Development (WCCD) noted, a society’s culture is neither static nor unchanging but rather is in a constant state of flux, influencing and being influenced by other world-views and expressive forms. The current era of globalization, with its unprecedented acceleration and intensification in the global flows of capital, labour, and information, is having a homogenizing influence on local culture. While this phenomenon promotes the integration of societies and has provided millions of people with new opportunities, it may also bring with it a loss of uniqueness of local culture, which in turn can lead to loss of identity, exclusion and even conflict.

This is especially true for traditional societies and communities, which are exposed to rapid ‘modernisation’ based on models imported from outside and not adapted to their context. Globalization and Culture. The cultural dimension of globalization, or “cultural globalization” refers to the circulation and sharing of ideas and of meanings and values across countries; hence across cultures, with the effect of increasing social contacts (Paul 2006), this presumably leads to more positive human interconnectedness.

Reflecting on how culture has been understood and used so far helps in turn understand issues associated with its global circulation and sharing. Culture As humans, we produce culture to make and share meaning over everything we do, feel, think, and believe in. In this sense culture is an intrinsic part of human nature (Geertz 1973). Without culture Geertz (1973, p. 49) further argues, men (and women) would be “unworkable monstrosities” and “mental basket cases” incapable of making sense of themselves, others and the world they live in. . …. culture is not a private affair – it is by definition shared, however imperfectly with other people. Main.