How Hitler built a SUPERGUN. The V-3 'supergun' was meant to win the war for Germany. 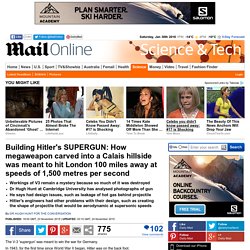 In 1943, for the first time since World War II began, Hitler was on the back foot. Allied bombs were devastating German cities and the Fuhrer was rattled. His proposed V-3 cannon would be the biggest gun the world had seen. The impressive weapon, however, was never test-fired and plagued with technical difficulties. Scroll down for video The V-3 'supergun' was meant to win the war for Germany. The V-3 (Vergeltungswaffe 3) was a German World War II supergun. It was planned to be used to bombard London from two large bunkers in the Pas-de-Calais region of northern France. But they were labelled as 'unusable' by Allied bombing raids before completion. It was a doomed secret 'drone' mission to destroy the V-3 that led to the death of Joe Kennedy Junior, a pilot and older brother of the future US president, John F. The impressive weapon was never test-fired and plagued with technical difficulties.

Loaded: 0% Progress: 0% MinimizeExpandClose. The Exploding Anti-Tank Dogs of World War II. Today I found out about the use of exploding anti-tank dogs during World War II. 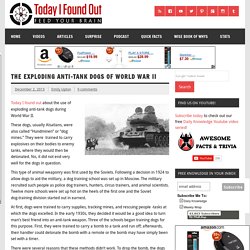 These dogs, usually Alsatians, were also called “Hundminen” or “dog mines.” They were trained to carry explosives on their bodies to enemy tanks, where they would then be detonated. No, it did not end very well for the dogs in question. This type of animal weaponry was first used by the Soviets. Following a decision in 1924 to allow dogs to aid the military, a dog training school was set up in Moscow. At first, dogs were trained to carry supplies, tracking mines, and rescuing people -tasks at which the dogs excelled. There were several reasons that these methods didn’t work. The Soviets scrapped their initial plan, but unfortunately for Fido, they came up with a new one.

As if ending their life wasn’t enough, the training involved wasn’t exactly a walk in the park. Anti-tank dogs started being used in earnest in 1941, when German forces advanced on Soviet lands. Bonus Facts: History of the Battle of Britain. "I think we can say that the Battle of Britain might never have been won... if it were not for the radar chain" MRAF Sir William Sholto Douglas "It is doubtful whether there is any point in continuing attacks on radar sites, in view of the fact that not one of those attacked so far has been put out of action. 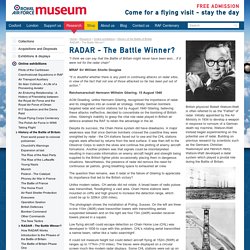 " Reichsmarschall Hermann Wilhelm Göering, 15 August 1940 ACM Dowding, unlike Hermann Göering, recognised the importance of radar and its integration into an overall air strategy. Initially German bombers targeted radar and sector stations but by August 1940 Göering, believing these attacks ineffective, decided to concentrate on the bombing of British cities. Despite its success, the Chain Home system did have drawbacks. The science and technology of World War II. For all the role of science, mathematics, and new inventions in earlier wars, no war had as profound an effect on the technologies of our current lives than World War II (1939-45). 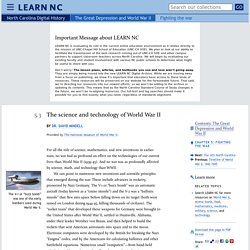 And no war was as profoundly affected by science, math, and technology than WWII. The V-1 or “buzz bomb” was one of the early bombers used during World War II. We can point to numerous new inventions and scientific principles that emerged during the war. These include advances in rocketry, pioneered by Nazi Germany. The V-1 or “buzz bomb” was an automatic aircraft (today known as a “cruise missile”) and the V-2 was a “ballistic missile” that flew into space before falling down on its target (both were rained on London during 1944-45, killing thousands of civilians).

Top inventions and technical innovations of World War 2. Saying that World War II completely changed the world always sounds like either a massive understatement or a trivialisation of the entire conflict; but, the simple fact is that the war really did change everything, including ushering in a new technological age. 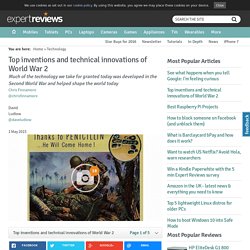 As we approach the 70th anniversary of the end of the war, the staggering truth is that the conflict continues to have an impact on the way that we live, and in more ways that you may expect. One of the most incredible things is that so many of our 'modern' inventions and, thus, way of life, have their direct origins in the war. As well as being a terrible period showcasing the worst of the human race, it pushed and developed inventions at a rate that has never been equalled. While the inventions and technological improvements of this war can never be justified against the appalling loss of life, World War II completely shaped the technological world that we live in now. 11. 10. The Jerrycan is clever for several reasons. 9. Battle of the Atlantic. The Battle of the Atlantic, which lasted from September 1939 until the defeat of Germany in 1945, was the war’s longest continuous military campaign. 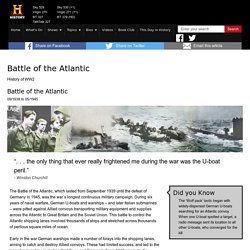 During six years of naval warfare, German U-boats and warships – and later Italian submarines – were pitted against Allied convoys transporting military equipment and supplies across the Atlantic to Great Britain and the Soviet Union. This battle to control the Atlantic shipping lanes involved thousands of ships and stretched across thousands of perilous square miles of ocean. Early in the war German warships made a number of forays into the shipping lanes, aiming to catch and destroy Allied convoys.

These had limited success, and led to the loss of major ships including Graf Spee and Bismarck. The U-boat war 1940. U-boats were to play an important part in World War Two. 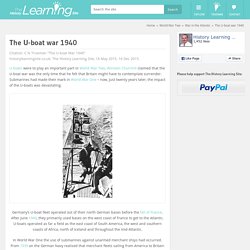