Europeans are more positive about future of the EU — except the Brits. EU progress towards its climate change goals (infographic) 2020 climate goals to be reached The EU targets for 2020 have been set out in the climate and energy package adopted in 2008. 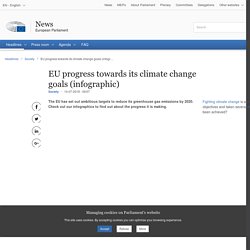 One of its objectives is a 20% cut in greenhouse gas emissions compared to 1990 levels. In 2015, the amount of greenhouse gas emissions in the EU already decreased by 22% compared with 1990 levels. According to EU countries' latest projections based on existing measures, the EU will remain on track to meet this target. Emissions are expected to be 26% lower in 2020 than in 1990. Two Cheers for European Defense Cooperation. More than a year into the Trump administration, disagreements between U.S. officials and European leaders on issues such as Iran, climate, and now trade are to be expected. 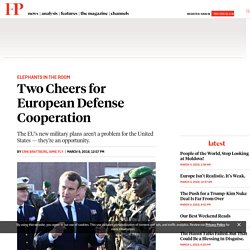 Less anticipated was that the European Union’s defense cooperation might also become a subject of debate. This issue risks fueling an unnecessary transatlantic row. The backdrop is the EU’s growing ambitions in defense. After having made little progress over the past decade toward an expanded security role for the union, defense is becoming a higher priority area for the EU, especially its leading continental powers, France and Germany.

A combination of several factors accounts for this development. As a result, the Europeans have, on paper, been able to make significant strides on defense cooperation over the past year. In principle, these moves should be welcomed by a U.S. administration that has made defense spending and burden-sharing a centerpiece of its relations with NATO allies. The importance of a European foreign and security policy - Home and abroad. The EU's Greatest Achievements According To Europeans. Five reasons why the E.U. deserved the Nobel Peace Prize. Poland has become Europe's growth champion, but can this success continue? The Polish economy has become a key European success story, with the country recording high levels of growth since 1989 and making strides in ‘catching up’ with Western Europe. 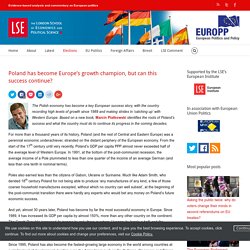 Based on a new book, Marcin Piatkowski identifies the roots of Poland’s success and what the country must do to continue its progress in the coming decades. For more than a thousand years of its history, Poland (and the rest of Central and Eastern Europe) was a perennial economic underachiever, stranded on the distant periphery of the European economy. From the start of the 17th century until very recently, Poland’s GDP per capita PPP almost never exceeded half of the average level of Western Europe. In 1991, at the bottom of the post-communist recession, the average income of a Pole plummeted to less than one quarter of the income of an average German (and less than one tenth in nominal terms).

Poles also earned less than the citizens of Gabon, Ukraine or Suriname. EU enlargement: The next seven. Seven countries, as well as Kosovo, are waiting in the wings to join the European Union.

Kosovo's independence is not recognised by all EU countries, but the EU nevertheless views it as a potential candidate for membership. Croatia and Turkey started accession talks on 3 October 2005. Croatia joined on 1 July 2013. Turkey could complete negotiations in 10-15 years, but progress has been very slow, as the EU is divided over whether Turkey should join at all. The other Balkan countries have been told they can join the EU one day, if they meet the criteria. EU expansion 1952-2007 Applied for full membership: April 2009 Confirmed as candidate: June 2014 Albania is not expected to join the EU until 2020 at the earliest. But the EU urged Albania to do more to tackle corruption and organised crime, especially crime relating to immigration and human trafficking, and drugs. The negotiations took three-and-a-half years - three times longer than they took in Croatia's and Macedonia's case.

Kosovo profile. In case you were wondering, this is the list of astonishing successes the EU really did achieve. Everything about the referendum campaign so far has been dispiriting. 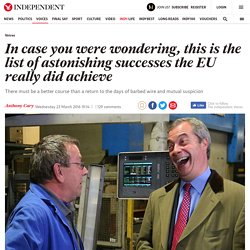 The Brexiteers, with gleeful support from much of the media, continue to peddle their myths about the costs and iniquities of the European Union. The analysis is all about what “they” inflict upon “us”, and what “we” are failing to wrestle back from “their” corrupt, sclerotic fingers. The InFacts.org website is doing impressive work exposing the falsehoods and distortions, but there is no let up. On the other side, there is overwhelming support for “Remain” – from the business, educational, scientific, military and security communities (including Nato), young people, the political party leaders – even world leaders, for heaven’s sake – yet the outcome is still in the balance. How is this possible? Europe’s travails have triggered a fear of contagion, and an illusory belief that Britain might insulate itself from danger if only it could “take back control”. Join Independent Minds.

A European success story. PUBLISHED: 08:00 03 July 2018 Paul Knott The EU has helped people in Balkan countries like Macedonia on the road to a more democratic future. 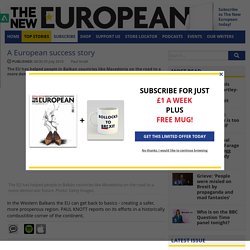 Photo: Getty Images. This content is subject to copyright.