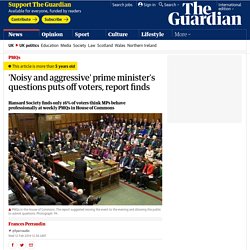 The report (pdf), published before PMQs on Wednesday, said that although it was the parliamentary event the public were most aware of, common words associated with it were "noisy", "childish", "over the top" and "pointless". Two-thirds of respondents agreed that PMQs involved too much party political point-scoring, compared with 5% who disagreed, and 47% agreed that the event was "too noisy and aggressive", compared with 15% who thought it wasn't. Although 40% agreed that the event dealt with the important issues facing the country and 36% said it was informative, only 16% thought MPs behaved professionally, with 48% thinking they didn't.

It also suggested inviting the public to submit questions once a month, pointing out that new technology would allow this to be done easily and cheaply. Prime Minister's Questions: 11 reasons why it epitomises the worst in British politics. Politicians and journalists love it but for the vast majority of the public, watching Prime Minister’s Questions resembles a trip to the zoo and epitomises everything they hate about British politics. 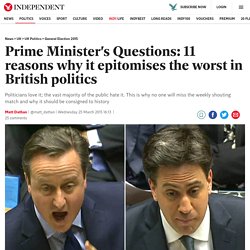 We had to wait for the final session of the Parliament to finally get anything of any substance out of the weekly shouting match but it was hard to hear through all the noise. Asked by Ed Miliband to give a rare “straight answer,” David Cameron ruled out a VAT rise today and made the Labour leader look like a fool. Download the new Indpendent Premium app.

Boris Johnson pops back in for a token nod to democracy. The lesser-spotted Boris Johnson fumbled and bumbled his way into the Commons chamber, his eyes blinking under the artificial lights. 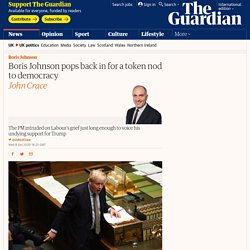 It was a shame he had left his shades back in Mustique. This was his first public appearance since well before Christmas, and he didn’t seem at all match-fit, whatever he had been up to. Next time he might take advantage of the “New Year, New You” deals offered by the Austrian health clinic that Michael Gove swore by. On the plus side, though, prime minister’s questions is no longer quite the ordeal it used to be. Partly because the new Speaker, Lindsay Hoyle, has pared PMQs back to a brisk 30 minutes, but mostly because Boris only has to contend with a lame duck leader of the opposition.

These days, the Labour benches resemble a group therapy session for people recovering from major trauma. Meanwhile, Jeremy Corbyn carries on. Rather he prefers to hang on, desperate for his legacy to be somehow preserved. No matter. PMQs (the hardest test of them all?) The Guardian. PMQs is a load of rubbish, says longest-serving MP. The longest-serving MP in the House of Commons, Labour’s Sir Gerald Kaufman, has described prime minister’s questions as “an exchange of pointless and useless declamations”, condemning the weekly session as a “load of rubbish”. 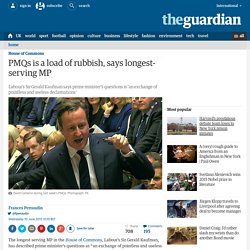 Kaufman, who has the honorary title of father of the house, said on BBC Radio 4’s Today programme: “For years now prime minister’s questions has been an exchange of pointless and useless declamations with the prime minister preparing what he’s going to say regardless of the questions that are put.” He said Cameron used PMQs as an “opportunity – I don’t blame him, waste of space though he is – to make certain points which he wants to do, which he believes will reverberate around the country. They won’t. Nobody’s interested. Nobody cares any more.” Kaufman, 84, has been MP for Manchester Gorton since 1983 and before that was MP for Manchester Ardwick from 1970.

Prime minister’s questions: past their sell-by date or vital for democracy? It’s good theatre, but what’s the point? 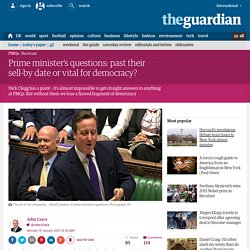 On Sunday, the deputy prime minister, Nick Clegg, told BBC Radio 5 Live that he thought prime minister’s questions had reached their sell-by date. “The whole thing is ridiculous,” he said, “the whole thing should be scrapped. It’s an absolute farce.” The timing of Clegg’s remarks is no coincidence. The coalition now exists in name only: the election is the only thing on anyone’s mind at Westminster.

Clegg has a point about PMQs, which began life in 1961 as two weekly, 15-minute sessions on Tuesdays and Thursdays before Tony Blair replaced them with one 30-minute session on a Wednesday in 1997. Even those 10 minutes are rarely enlightening, as the art – politicians do see it as an art – of PMQs is to avoid embarrassment. It’s not hard to come up with ways to improve PMQs. Yet even in its current, deeply flawed format, PMQs is an institution worth preserving. 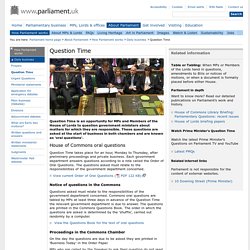