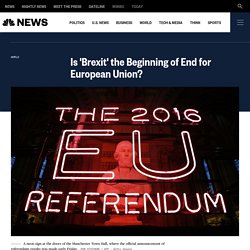 The news and stories that matter, delivered weekday mornings. June 23, 2016, 12:42 PM GMT / Updated June 24, 2016, 11:53 AM GMT By Anmar Frangoul Britons voted to leave the 28-member European Union and analysts are worried the outcome could have far-reaching consequences for Europe's political landscape. A recent poll from YouGov showed that, out of seven countries polled, a majority in six of those felt that more countries would choose to leave the EU if a Brexit occurred.

Sixty-nine percent of Swedes believed it was likely there would be further exits from the EU "post-Brexit," with 66 percent of Danes and 57 percent of Norwegians feeling the same way. "Denmark and Sweden would be the ones to watch in particular, as their position would be significantly weakened," Dardanelli added via email. The tone of such conversations was already being set.

The Crisis of EU Enlargement. This report looks at why enlargement has been successful in the past and how to integrate these lessons to develop a new strategy. 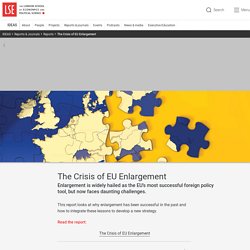 The Crisis of EU Enlargement Biographies from time of publication.Anne Applebaum held the Philippe Roman Chair in History and International Affairs at LSE IDEAS for the 2012- 2013 academic year. As Warsaw correspondent for The Economist in 1989, she covered the collapse of communism in the region. She is currently the Director of Political Studies at the Legatum Institute in London and a columnist for The Washington Post and Slate.

She won the 2004 Pulitzer Prize for non-fiction for her book Gulag: A History.Cristina Blanco Sío-López is a Researcher in European Integration Studies and a Project Manager at the CVCE, Luxembourg. How the European Far-Right Is Growing in Power and Influence. It’s the end of Europe as we know it (and it feels fine) Where Brexit will hurt most in Europe. If the EU does not drastically change, it is doomed to decline and fall like the USSR. Macron accuses Hungary of starting ‘WAR’ in EU over migrant crisis ‘big mistake’ The French President took aim at Hungary’s Prime Minister Viktor Orban and Italy’s deputer prime minister Matteo Salvini by warning them their steer towards nationalism is a “big mistake”. 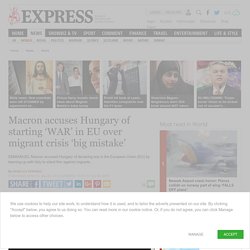 The pair have teamed up to form a conservative, anti-migration political alliance ahead of next May’s European Parliament election and labelled Mr Macron their number one enemy. Both nations have taken a hardline stance against immigration, with Italy’s new government refusing to let migrant rescue ships dock and Hungary passing laws to punish anyone found to help asylum seekers. The French president accused both leaders of “playing” on citizens fears to gain support for their anti-immigration policies which “revert to populism”. He said “cooperation” and “collective” change is the best way to reform the EU. “Viktor Orban doesn’t want to take migrants from Italy, he is the worst enemy of Italy because nationalism is just generalised war.

Mr Macron added: “They are playing in to fears. EU leaders fail, again, to agree on migration policy. The European Union: A Failed Experiment. The EU Is Looking Like Europe's Next Failed Empire. Eurozone crisis explained. Here comes the next euro crisis. In Europe, nationalism rising. Over the past 75 years, many Western nations moved steadily toward cooperation and interconnectedness, as their shared economic and political interests converged during this period called globalization. 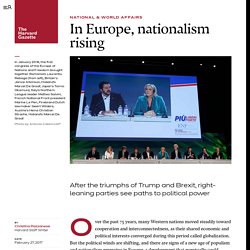 But the political winds are shifting, and there are signs of a new age of populism and nationalism emerging in Europe, a development that eventually could undermine post-war security and unity. Donald Trump won the 2016 presidential election in part by promising to “drain the swamp” in Washington, D.C., of political elites and to “Make America Great Again,” a broad-brush populist slogan that supported a more isolationist, protectionist, “America First” posture toward the wider world.

His campaign rhetoric criticizing some Muslims and Mexicans and his recent efforts to limit immigration and trade have left many analysts wondering whether his presidency could effectively move the country toward a period of ethno-nationalism. A new salience Europe emboldened Look to the east What’s likely next. Europe and nationalism: A country-by-country guide.