Thousands of people sighted a mysterious bright green and orb-shaped light that streaked across the skies of Southern California on Tuesday night, April 26, 2016, between 9:30 p.m. and 10 p.m. 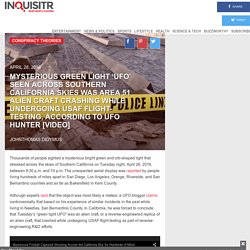 The unexpected aerial display was reported by people living hundreds of miles apart in San Diego, Los Angeles, Orange, Riverside, and San Bernardino counties and as far as Bakersfield in Kern County. Although experts said that the object was most likely a meteor, a UFO blogger claims controversially that based on his experience of similar incidents in the past while living in Needles, San Bernardino County, in California, he was forced to conclude that Tuesday’s “green light UFO” was an alien craft, or a reverse-engineered replica of an alien craft, that crashed while undergoing USAF flight testing as part of reverse-engineering R&D efforts. Witnesses snapped pictures and took videos later uploaded online. “Saw it from Point Loma. It was pretty big!” KTLA reports that Dr. [Image via Shutterstock] NewsLinQ. San Jose police at scene of hostage situation - Story. 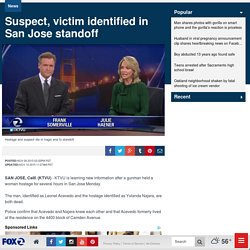 (KTVU) - KTVU is learning new information after a gunman held a woman hostage for several hours in San Jose Monday. The man, identified as Leonel Acevedo and the hostage identified as Yolanda Najera, are both dead. Police confirm that Acevedo and Najera knew each other and that Acevedo formerly lived at the residence on the 4400 block of Camden Avenue. The standoff started at around 2:18 p.m. on Monday. San Jose Police dispatch received a 911 call regarding a male with a gun who forcefully took a female into the home. Joey Feek enters hospice care following terminal cancer diagnosis. 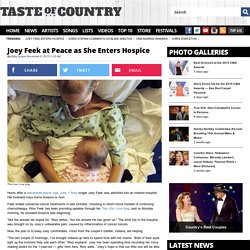 Her husband says home hospice is next. Feek ended colorectal cancer treatments in late October, choosing to return home instead of continuing chemotherapy. Rory Feek has been providing updates through his This Life I Live blog, and on Monday morning, he revealed hospice was beginning. “Not the answer we hoped for,” Rory writes, “but the answer He has given us.” The 4AM trip to the hospital was brought on by Joey’s unbearable pain, caused by inflammation of cancer tumors.

Now, the plan is to keep Joey comfortable. “The last couple of mornings, I’ve brought Indiana up here to spend time with her mama. “Hospice is arranged and a hospital bed will be delivered later this morning. Last Thursday night, fans, friends family and fellow country stars joined in for a prayer vigil. Tyshawn Lee. 9-Year-Old Boy Fatally Shot In Chicago Was Lured, “Executed” The 9-year-old child who was fatally shot in a Chicago alley Monday afternoon was lured there and “executed,” police say. 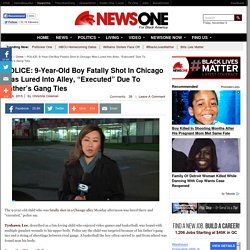 Tyshawn Lee, described as a fun-loving child who enjoyed video games and basketball, was found with multiple gunshot wounds to his upper body. Police say the child was targeted because of his father’s gang ties and a string of shootings between rival gangs. A basketball the boy often carried to and from school was found near his body. From the Chicago Tribune: Law enforcement sources have told the Tribune that the bloody conflict involves rival factions of two of Chicago’s oldest gangs — the Gangster Disciples and the Black P Stones. The boy’s father may know who killed his son, but he has refused to cooperate with authorities, Chicago police Superintendent Garry McCarthy told reporters Thursday.

Scoopnest. How James Foley gave up escape for friend – former hostage explains - Daily Media Buzz. Spanish reporter writes about how the ‘US journalist demonstrated his enormous human depth’ while being held captive by Islamic State James Foley, the US journalist killed by the militant group Islamic State, might have escaped but gave up the attempt so as not to abandon his friend, according to a former fellow hostage. 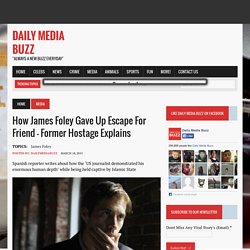 In a serialised account of his own captivity at the hands of the Islamist group in 2013-14, Spanish reporter Javier Espinosa revealed that Foley made two escape attempts with another hostage, British photographer John Cantlie. Isis militants decapitated James Foley in August 2014, five months after Espinosa and another Spaniard, photographer Ricardo García Vilanova, were freed.

The two Spaniards were held along with 21 others including Foley and Cantlie in an industrial complex north of Aleppo. Minneapolis police are asking for help as they search for a 22-year-old woman last seen in a Dinkytown bar. 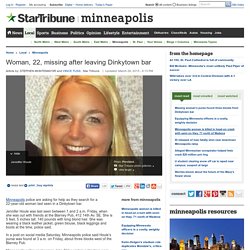 Jennifer Houle was last seen between 1 and 2 a.m. Friday, when she was out with friends at the Blarney Pub, 412 14th Av. SE. Photographer records video of Vietnam's Hang Son Doong cave using a drone to capture its colossal sizeThe travellers in the cave appear as specks within the huge landscape dominated by jungle and rocky outcropsHang Son Doong contains jungle-like vegetation, water and sheer cliffs and is the largest cave in the world By Jake Polden For Mailonline Published: 13:51 GMT, 13 March 2015 | Updated: 15:51 GMT, 13 March 2015 It is the largest cave in the world, with its own sheer rocky cliffs, jungle-like vegetation and climate. 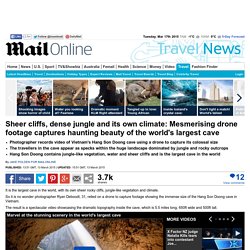 So it is no wonder photographer Ryan Deboodt, 31, relied on a drone to capture footage showing the immense size of the Hang Son Doong cave in Vietnam.