Gmail. Trendy Google. Electric bike blog. What would the first pedal cycle have looked like if its 19th-century pioneers had enjoyed access to today’s advanced materials? 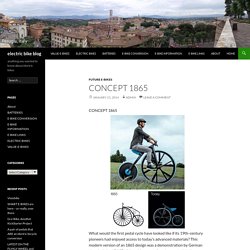 This modern version of an 1865 design was a demonstration by German chemical giant BASF of the wide range of modern materials they produce. 1865 was the year of BASF’s founding. It’s a one-off. You can see videos of it being ridden but they are not likely to go into production. This modern version incorporates a detachable battery in the seat and 24 innovative new materials. “Penny-farthing” type e-bikes are not likely to be e-bikes of the future. 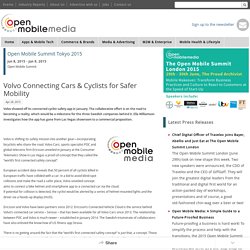 The collaborative effort is on the road to becoming a reality, which would be a milestone for the three Swedish companies behind it. Ella Williamson investigates how the app has gone from Las Vegas showroom to a commercial proposition. Volvo is shifting its safety mission into another gear—incorporating bicyclists who share the road. Volvo Cars, sports specialist POC and global telecoms firm Ericsson unveiled in January at the Consumer Telematics Show in Las Vegas a proof-of-concept that they called the “world’s first connected safety concept”.

European accident data reveals that 50 percent of all cyclists killed in European traffic have collided with a car. Ericsson and Volvo have been partners since 2012. There is no getting around the fact that the “world’s first connected safety concept” is just that, a concept. Another app company that would be open to collaborating with the project’s Swedish trio is BikeShield. Bikes, Bike Reviews, Cycling Routes, Race News - BikeRadar. ePowerBikes - Your electric transport: electric bike, elektroskuter, elektromototsikl. Bikes, Bike Reviews, Cycling Routes, Race News - BikeRadar. Tech and art bring bling to night-time bike rides. Bikes: the new face of bling in China - Decoder. Top 10 cycling innovations of 2014. Bicycle historians, take note – it's time once again to look back at 10 of the bike-related products that most caught our attention over the past year! 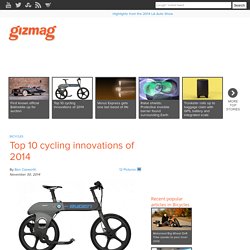 As with our lists from 2012 and 2013, these aren't necessarily things that we think are destined to be big sellers. In fact, it's entirely possible that this might be the last you hear of many of them. We like 'em, though, because they're examples of what happens when people dare to try something different ... and that sort of spirit is the reason why we're not still all riding penny farthings. View all Schwalbe Procore tire system Setting a mountain bike's tire pressure is a bit of a balancing act ... too hard, and the tires won't provide decent traction – too soft, and they're likely to get pinch flats, plus they might not stay seated on the rim. The Procore system, however, allows for the best of both extremes. 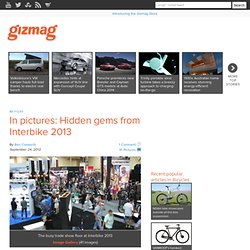 While we've already posted a number of articles on products that we saw there, we came across many more interesting items that we still haven't told you about. We've compiled a gallery of those various doo-dads here, for your gawking pleasure. View all North America's largest bike show, Interbike 2013 featured over 750 companies representing at least 1,200 brands.

To see what we found, just pay a visit to the photo gallery (and don't forget to check out the gadgets featured in the earlier full articles, too). About the Author Post a CommentRelated Articles Just enter your friends and your email address into the form below For multiple addresses, separate each with a comma Privacy is safe with us because we have a strict privacy policy. Cycling News and Bike Reviews for Road Bikes, Mountain Bikes, BMX and More - Bike Rumor.