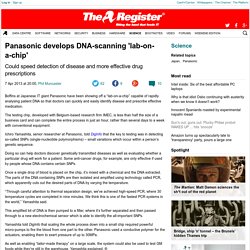 The testing chip, developed with Belgium-based research firm IMEC, is less than half the size of a business card and can complete the entire process in just an hour, rather than several days to a week with conventional equipment. Ichiro Yamashita, senior researcher at Panasonic, told DigInfo that the key to testing was in detecting so-called SNPs (single-nucleotide polymorphisms) – small variations which occur within a person’s genetic sequence. Doing so can help doctors discover genetically transmitted diseases as well as evaluating whether a particular drug will work for a patient. Some anti-cancer drugs, for example, are only effective if used by people whose DNA contains certain SNPs.

Headspace. Noninvasive brain stimulator may ease Parkinson's symptoms. Video Parkinson's disease patients whose symptoms such as tremor, muscle stiffness and slowed movement make it tough to hold an eating utensil steady have few options for relief outside of a hospital or clinic. 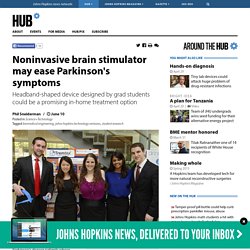 Medication can help, but over time it tends to become less effective. To give these patients another in-home option, Johns Hopkins graduate students have invented a headband-shaped device to deliver noninvasive brain stimulation to help tamp down the symptoms. Muscle Map. Mind Mapping. Pneumatic thought-controlled prosthetic arm created by students.

Two undergraduate students from Toronto's Ryerson University have created a prosthetic arm that is controlled by its wearer's brain signals, and powered by compressed air. 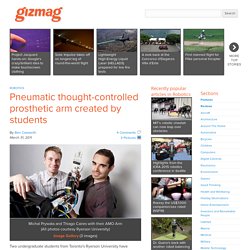 Not only is the Artificial Muscle-Operated (AMO) Arm said to offer a greater range of movement than traditional prostheses, but it also doesn't require the amputee to undergo invasive surgery, is easy to learn to use, and it is relatively inexpensive to make. DNA testing chip delivers results in one hour, paves way for personalized drug treatments. Panasonic, together with the Belgium-based research institution IMEC, has developed a DNA testing chip that automates all stages of obtaining genetic information, including preprocessing. 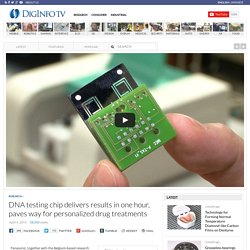 This development is expected to enable personalized, tailor-made therapy to become widespread. "This is the chip we've actually developed. As you can see, it's less than half the size of a business card. It contains everything needed for testing DNA. Once a drop of blood is inserted, the chip completes the entire process, up to SNP detection. " SNPs are variations in a single DNA base among individuals. Detecting SNPs makes it possible to check whether genetically transmitted diseases are present, evaluate future risks, and identify genes related to illness. "By investigating SNPs, we can determine that this drug will work for this person, or this drug will have severe side-effects on that person. How to Practice Radical Gratitude.

If you’re a reader of Greater Good, you’ve probably heard a lot about why and how to practice gratitude—and you’re especially likely to hear all about it in the days leading up to Thanksgiving. 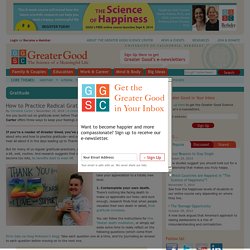 But for many of us regular gratitude-practicers, our practice can become a bit, well, routine. And research suggests that when a practice starts to become too rote, its benefits start to wear off. If you need a gratitude challenge this Thanksgiving, here are three ways to take your appreciation to a totally new level. 1. Contemplate your own death. Tsukuba scientists reverse aging in human cell lines and give theory of aging a new lease of life. Brain-zapping headwear designed to treat Parkinson's. A team of graduate students at Johns Hopkins University has created a prototype device that delivers non-invasive brain stimulation to sufferers of Parkinson's disease. 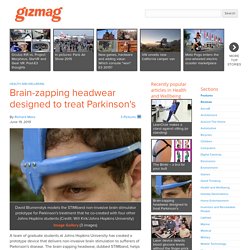 The brain-zapping headwear, dubbed STIMband, helps to reduce the severity of symptoms without requiring a visit to a hospital or doctor's office. While the device has not yet been clinically trialled on humans, its design took out second place at the VentureWell BMEidea national design contest earlier this month as well as first place in the People's Choice Award at Johns Hopkins' Biomedical Engineering Design Day 2015.

Parkinson's affects a million people in the United States and seven million people worldwide, with symptoms including uncontrollable tremors and slow movement. It cannot be cured, it gets worse over time, and many of its treatments become less effective after prolonged use. The students took inspiration from one of the more invasive and advanced treatment options: deep brain stimulation. Clear Vision Optical Aspire Eyewear eyeglass frames review. Innovation in eyewear isn’t really a topic that those of us in the tech and gadget field keep track of. 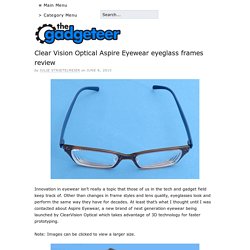 Other than changes in frame styles and lens quality, eyeglasses look and perform the same way they have for decades. At least that’s what I thought until I was contacted about Aspire Eyewear, a new brand of next generation eyewear being launched by ClearVision Optical which takes advantage of 3D technology for faster prototyping. Note: Images can be clicked to view a larger size. Eyewear and 3D prototyping aren’t words that usually go together. The Art of War by Sun Tzu. Commentary: Many comments have been posted about The Art of War. 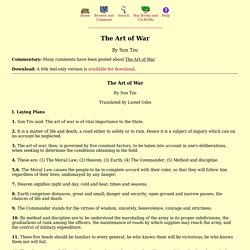 Download: A 60k text-only version is available for download. The Art of WarBy Sun Tzu Translated by Lionel Giles I. Laying Plans 1. Thync mood-changing wearable officially launches – we go hands-on (again) Back at CES 2015, one of the coolest new gizmos we tried was Thync. 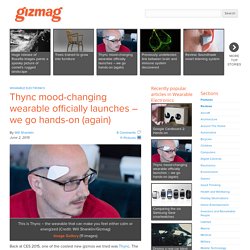 The wearable zaps your brain to make you feel either calm or energized (or both) – and, despite some healthy skepticism at first, we found that it worked exactly as advertised. A day in pictures: Melbourne's motorcycle paramedics. America’s health craze for fish oil is wiping out the world’s rarest shark. Another day, another round of headlines about China’s butchering of rare species. 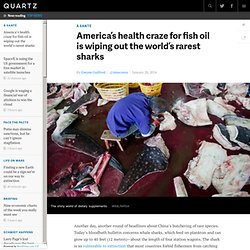 Today’s bloodbath bulletin concerns whale sharks, which feed on plankton and can grow up to 40 feet (12 meters)—about the length of four station wagons. The shark is so vulnerable to extinction that most countries forbid fishermen from catching them. That’s not stopping a factory in China’s Zhejiang province from slaughtering 600 whale sharks per year, according to Hong Kong-based conservation group WildLifeRisk. Use microbes, not pesticides, to boost crop yields. Smarter use of microbes that live in and around crops could pay huge dividends for farmers in the near future thanks to advances in genetic sequencing. A 21-member team organized by the American Academy of Microbiology established a set of recommendations on how advances in microbiology can be harnessed to improve agriculture. The recommendations, published in the Academy’s Colloquium Reports, set a goal of increasing yields by 20 percent over the next 20 years by enhancing the use of microbes while reducing the use of pesticides and fertilizers by 20 percent.

A sharper focus on the billions of microscopic organisms that colonize plants and often share a symbiotic relationship with them could greatly improve yields and lessen the need for costly fertilizers and pesticides, says team member Gwyn Beattie, a professor of plant pathology and bacteriology at Iowa State University. Reaching those goals would drastically cut input costs for farmers and produce a range of environmental benefits. Hyperbaric Oxygen Therapy Gets More Popular as Unapproved Treatment.

Lee Frost spent three months in 2013 taking her son Callum for treatment in a high-pressure oxygen chamber, in hopes it would help his severe autism. Ms. Frost, frustrated by the lack of approved treatments for her son, discovered hyperbaric oxygen therapy through online research. Callum’s ability to communicate had been limited to screaming tantrums, biting and slapping, she recalls. After receiving the therapy, which involves inhaling pure oxygen for 75 minutes at a time, Callum, now 5, is able to speak in sentences and dress himself in the morning before kindergarten, Ms.

Allan Jones: A map of the brain. (Warning: Blood) Veti-Gel Stops Bleeding Instantly. Sorting out top-class wines - Research News September 2013 - Topic 1. The tasters are overjoyed: of over 100 wines that were submitted, this rosé is of exceptional quality. “Fresh, dry, pleasant – a real summer wine,” says one; “incredibly well rounded,” says another; “delicate,” says a third. They also praise its harmony and the balance between sugar and acidity. Fungus Fix: How to Treat Nail Fungus. They Draw & Cook.