UK diplomat in Bali investigated over relationship with Briton jailed for drugs - Asia - World - The Independent. Alys Harahap, 30, a vice consul, was said to have been caught by prison officers embracing inmate Julian Ponder during one of their regular meetings inside the notorious Kerobokan Prison, according to the Mail on Sunday. 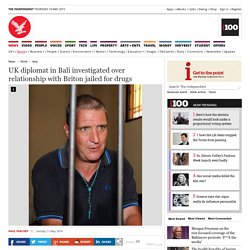 The Foreign Office declined to say if it had suspended the newly appointed Ms Harahap after officials at the prison reportedly accused her of inappropriate behaviour and of breaching prison rules and regulations. “We take allegations of this nature extremely seriously and we investigate them thoroughly,” the Foreign Office said. “We do not comment on individual cases.” Alys Harahap speaks out about Bali prison affair with Julian Ponde. Alys Harahap has told friends she never had an affair with Julian PonderPonder is part of a group of Brits convicted of drug offences in BaliHarahap visited him in prison on behalf of the British Consul several timesShe admits being naive in forming a friendship with man known as 'Mr Big'But insisted the pair did not have sordid trysts as he previously claimed By Alison Smith-squire For The Mail On Sunday Published: 23:30 GMT, 28 February 2015 | Updated: 13:35 GMT, 1 March 2015 The married British diplomat accused of conducting a sordid prison affair with a convicted drug dealer has broken her silence about the scandal, telling friends it was ‘a huge error of judgment’ on her part. 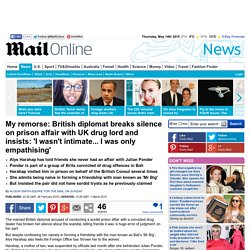 But despite confessing her naivety in forming a friendship with the man known as Bali’s ‘Mr Big’, Alys Harahap also feels the Foreign Office has ‘thrown her to the wolves’. Undang-Undang Nomor 35 Tahun 2009 Tentang Narkotika. Bali Nine: Timeline of key events. Nine Australians arrested at Denpasar airport April 17, 2005 Nine Australians are arrested in Bali on suspicion of attempting to smuggle more than eight kilograms of heroin out of Indonesia. 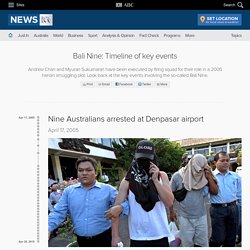 Indonesian customs officers allege four of the group — Martin Stephens, Renae Lawrence, Scott Rush and Michael Czugaj — were found at Denpasar airport with packages of heroin strapped to their bodies. They say another three — Si Yi Chen, Tan Duc Thanh Nguyen and Matthew Norman — were arrested at the Maslati Hotel at Kuta Beach in possession of about 300 grams of heroin. Police say two others — Andrew Chan and Myuran Sukumaran — were also arrested at Denpasar airport in relation to those found carrying heroin. Australian Federal Police confirm involvement August 22, 2005 We can't pick and choose who we deal with just because of the laws in their countries.

The Australian Federal Police (AFP) confirm Indonesian police had been acting on information given to them by Australian authorities. An Inspirational Story about Life - "The Man and the Butterfly" MNA: Network Ten - The Renae Lawrence Fabrications. In April 2014, with Schapelle Corby gagged under the threat of re-imprisonment, the scene was set for the Australian media to put its own words into her mouth. 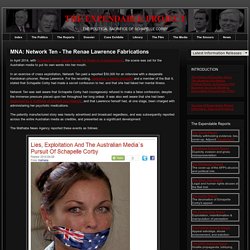 In an exercise of crass exploitation, Network Ten paid a reported $30,000 for an interview with a desperate Kerobokan prisoner, Renae Lawrence. For the recording, Lawrence, a heroin smuggler and a member of the Bali 9, stated that Schapelle Corby had made a secret confession to her, and that she had faked her mental illness. Network Ten was well aware that Schapelle Corby had courageously refused to make a false confession, despite the immense pressure placed upon her throughout her long ordeal. It was also well aware that she had been diagnosed by a multitude of eminent psychiatrists, and that Lawrence herself had, at one stage, been charged with administering her psychotic medications. The Mathaba News Agency reported these events as follows: The ABC's Media Watch subsequently reported this as follows: Return To The Mathaba Reports. Renae Lawrence: 'I'm afraid to come home' - aww. For the eight years she has been in Kerobokan prison, convicted drug mule Renae Lawrence has been mostly ignored, her plight overshadowed by that of fellow inmate, Schapelle Corby. 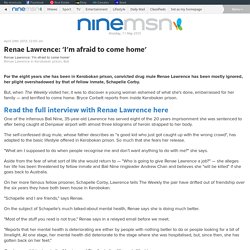 But, when The Weekly visited her, it was to discover a young woman ashamed of what she's done, embarrassed for her family — and terrified to come home. Bryce Corbett reports from inside Kerobokan prison. One of the infamous Bali Nine, 35-year-old Lawrence has served eight of the 20 years imprisonment she was sentenced to after being caught at Denpasar airport with almost three kilograms of heroin strapped to her body. The self-confessed drug mule, whose father describes as "a good kid who just got caught up with the wrong crowd", has adapted to the basic lifestyle offered in Kerobokan prison. So much that she fears her release.

View point: Executions: Jokowi’s ‘comedy of errors’, or Pandora’s Box? When infants learn to walk, sometimes they stumble and hit themselves on a table or a chair, get hurt and bawl their eyes out. 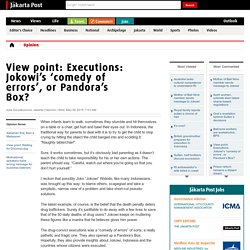 In Indonesia, the traditional way for parents to deal with it is to try to get the child to stop crying by hitting the object the child banged into and scolding it: “Naughty table/chair!” Sure, it works sometimes, but it’s obviously bad parenting as it doesn’t teach the child to take responsibility for his or her own actions. The parent should say, “Careful, watch out where you’re going so that you don’t hurt yourself.” I reckon that possibly Joko “Jokowi” Widodo, like many Indonesians, was brought up this way: to blame others, scapegoat and take a simplistic, narrow view of a problem and take short-cut pseudo-solutions. The latest example, of course, is the belief that the death penalty deters drug traffickers. The drug-convict executions was a “comedy of errors” of sorts, a really pathetic and tragic one.

You know what they say about the taste of blood. Andrew Chan Celebration. Lindsay Sandiford – Justice and Fairness for Lindsay Sandiford. She needs your help today. Todung Mulya Lubis: Even one life should be saved. TEMPO.CO, Jakarta - Lawyer and human rights activist Todung Mulya Lubis admitted that on April 27 and 28 last week, the day of the Bali Nine (minus one, in the end) execution, he had a difficult time holding back his tears. 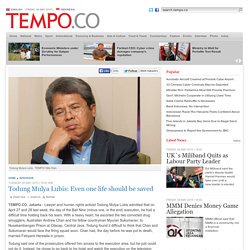 With a heavy heart, he escorted the two convicted drug smugglers, Australian Andrew Chan and his fellow countryman Myuran Sukumaran, to Nusakambangan Prison at Cilacap, Central Java. Todung found it difficult to think that Chan and Sukumaran would face the firing squad soon. R.I.P Andrew Chan and Myuran Sukumaran. Two Britons Lindsay Sandiford And Gareth Cashmore Face Death Sentence In Indonesia. Lindsay Sandiford is the second British citizen to be sentenced to death for drug offences in Indonesia in recent months, according to human rights campaigners. 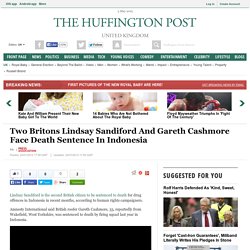 Amnesty International said British roofer Gareth Cashmore, 33, reportedly from Wakefield, West Yorkshire, was sentenced to death by firing squad last year in Indonesia. Briton Lindsay Sandiford being led away He and Sandiford are among around 40 foreigners - most of them convicted of drug crimes - out of more than 100 prisoners on death row in the country. Lindsay Sandiford faces Indonesian firing squad for smuggling more than £1m worth cocaine. Mostly she passes the time with knitting. 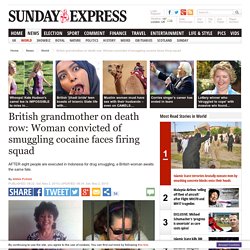 Her partner and two sons do not seem to be much in evidence and family contact is limited to her loyal sister. One of her few close friends was executed on Wednesday and neither lawyers nor the British Government can do much for her now - no wonder Lindsay Sandiford wants it all to be over. To most Britons Bali is the paradise island, an idyllic holiday destination. New hope for 'drugs mule' grandmother... - Death Penalty News.