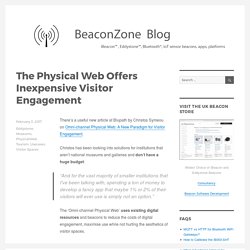 Christos has been looking into solutions for institutions that aren’t national museums and galleries and don’t have a huge budget: “And for the vast majority of smaller institutions that I’ve been talking with, spending a ton of money to develop a fancy app that maybe 1% or 2% of their visitors will ever use is simply not an option.” The ‘Omni-channel Physical Web’ uses existing digital resources and beacons to reduce the costs of digital engagement, maximise use while not hurting the aesthetics of visitor spaces.

Christos says: “The time for a paradigm shift is now, having reached the point where both the technology is ready, as well as the ability to access it from nearly all visitors.” Presentations by mulderp. Amazon. Amazon. Zerynth Studio - A powerful IDE for embedded programming. Derby Mini Maker Faire. Las Tendencias que dominarán el IoT en 2016. Wireless Sensor Networks (WSN) with Waspmote and Meshlium - Connect Sensors to the Cloud. Sensors Connect with Telefónica Cloud for Smart Cities and the IoT. Libelium Sensors Connect with Telefónica Cloud for Smart Cities and the IoT November 17th, 2014 - Libelium Wireless sensor hardware ecosystem adds software from global telco operator SAN MATEO, Calif., BARCELONA and ZARAGOZA, Spain—November 17, 2014—Libelium is adding new Cloud technology options to its Waspmote wireless sensor platform by integrating the Cloud solution from Telefónica, the global broadband and telecommunications provider, to allow faster time-to-market for Smart Cities and Internet of Things (IoT) projects. 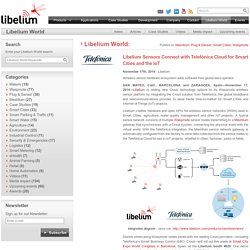 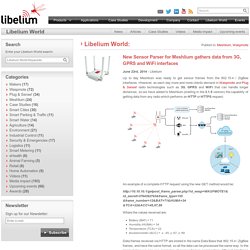 However, as each day more and more clients demand in Waspmote and Plug & Sense! Radio technologies such as 3G, GPRS and WiFi that can handle longer distances; so we have added to Meshlium (starting in the 3.1.5 version) the capability of getting data from any radio which performs an HTTP or HTTPS request. An example of a complete HTTP request using the new GET method would be: &frame_number=12&BAT=71&HUMA=34 &TCA=22&ACC=45,67,89. New version of Meshlium Scanner. Now up to 95% of Smartphone detected! New version of Meshlium Scanner. 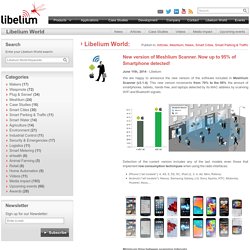 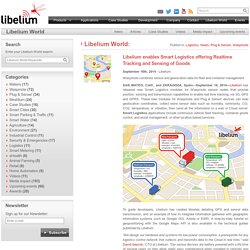 These new modules for Waspmote and Plug & Sense! Devices can read geolocation coordinates, collect extra sensor data such as humidity, luminosity, CO, CO2, temperature, or vibration, then send all the information to a web or Cloud server. To guide developers, Libelium has created libraries detailing GPS and sensor data transmission, and an example of how to integrate information gathered with geographic information systems such as Google GIS, Axeda or ESRI. 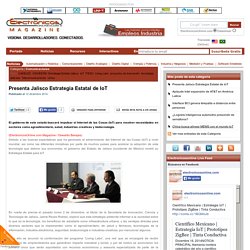 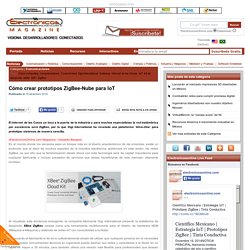 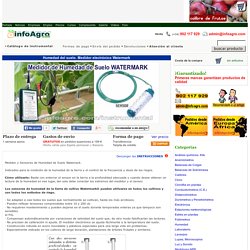 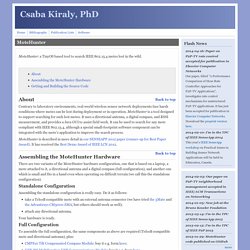 Contrary to laboratory environments, real-world wireless sensor network deployments face harsh conditions where motes can be lost during deployment or in operation. MoteHunter is a tool designed to support searching for such lost motes. It uses a directional antenna, a digital compass, and RSSI measurement, and provides a Java GUI to assist field work. It can be used to search for any mote compliant with IEEE 802.15.4, although a special small-footprint software component can be integrated with the mote’s application to improve the search process. Purchase: Not all wireless sensor networks are created equal: A comparative study on tunnels.

TinyLIME. Operational Setting Most sensor network middleware operate in a setting where the sensors are fixed in the environment and report their values to a centralized point. 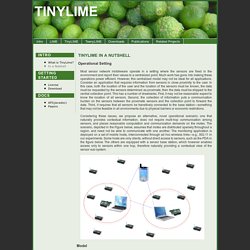 Much work has gone into making these operations power efficient. However, this centralized model may not be ideal for all applications. Consider an application that requires information from sensors in close proximity to the user. In this case, both the location of the user and the location of the sensors must be known, the data must be requested by the sensors determined as proximate, then the data must be shipped to the central collection point. Considering these issues, we propose an alternative, novel operational scenario; one that naturally provides contextual information, does not require multi-hop communication among sensors, and places reasonable computation and communication demands on the motes. Model. TinyLIME. Trident. Purchase: Not all wireless sensor networks are created equal: A comparative study on tunnels.

D3S - Dynamic Distributed Decentralized Systems Group. TRIDENT is a software tool expressly designed to support in-field connectivity assessment by relying only on WSN nodes, without additional infrastructure, and the sharing of results uniformly over different experiments. It covers the entire workflow concerned with connectivity assessment experiments. After the WSN nodes are flashed with TRIDENT software, appropriate user interfaces enable the operator to (re)configure the experiments settings, discover nodes, and download the results.

The latter are stored in a database, simplifying the storage and the offline analysis of the data gathered. TRIDENT offers a simple visualization of the connectivity map built from available collected traces. A similar visualization is provided also for mobile nodes; once the tool is fed with a sequence of locations, it can “replay” the maps, showing to the operator how connectivity evolved due to mobility. For getting the source see here. New Waspmote Sensor Board enables extreme precision agriculture in vineyards and greenhouses. OpenMote. List of wireless sensor nodes. There are two kinds of sensor nodes used in the sensor network. One is the normal sensor node deployed to sense the phenomena and the other is gateway node that interfaces sensor network to the external world.

IStaX is designed to work across Vitesse’s portfolio of Ethernet switches and PHYs providing not only the deterministic and real time responses that Industrial IoT requires, but also addresses such issue as security, including firewall and intrusion protection, and network resiliency. The kit uses the latest eCos operating system for optimal performance, cost effective implementation, and RedBoot bootloader for reliability. Features - The Lab Rat: FPGA Kit Goes All Out. Un poco de Java. MQTT. Clients & Developer Tools. WAMP compared to MQTT and others. Compared. Alright. So how does WAMP stack up versus other technologies? WSN430 - OpenWSN - Confluence. Bluetooth_1_0_user_guide.pdf. Implementation of SNMP Protocol with ContikiOS contiki-snmp for WSN430 targets - fetch.php.