Biswajit Ganguly has keen interest in the renewable energy sector. To read articles released by Distributed Energy, visit our blog: 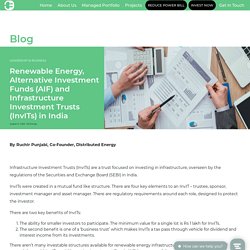 InvITs were created in a mutual fund like structure. There are four key elements to an InvIT – trustee, sponsor, investment manager and asset manager. There are regulatory requirements around each role, designed to protect the investor. There are two key benefits of InvITs: The ability for smaller investors to participate. There aren’t many investable structures available for renewable energy infrastructure investment in India and around the world. You might be wondering why we’ve considered an AIF as opposed to an InvIT? Given the hurdles as well as the newness of the asset class, renewable energy has been the domain of rich institutions until now. Solar Energy Assets In Your Investment Portfolio.

By Ruchir Punjabi, Co-Founder, Distributed Energy As I write this the stock market has just had its most recent downturn. 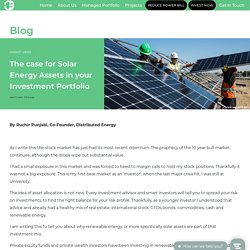 The prophecy of the 10 year bull market continues, although the drops wipe out substantial value. I had a small exposure in this market and was forced to heed to margin calls to hold my stock positions. Thankfully it was not a big exposure. This is my first bear market as an ‘investor’; when the last major crisis hit, I was still at University. The idea of asset allocation is not new. I am writing this to tell you about why renewable energy, or more specifically solar assets are part of that investment mix. Private equity funds and private wealth investors have been investing in renewable energy for close to a decade.

In the early stages the governments were willing to lock in “higher” rates (compared to conventional sources of power) to diversify their energy mix and invest in a greener future. As a type of asset, solar panels don’t move much. Long term Investments Benefits in Renewable Energy. By Joseph Saviour, Senior Analyst, Distributed Energy No investment is without risk. 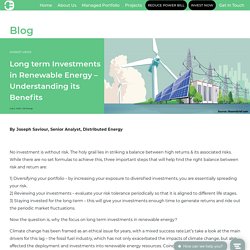 The holy grail lies in striking a balance between high returns & its associated risks. While there are no set formulas to achieve this, three important steps that will help find the right balance between risk and return are: 1) Diversifying your portfolio – by increasing your exposure to diversified investments, you are essentially spreading your risk. 2) Reviewing your investments – evaluate your risk tolerance periodically so that it is aligned to different life stages. 3) Staying invested for the long-term – this will give your investments enough time to generate returns and ride out the periodic market fluctuations. Useful Models to Understand Energy Savings and Investment Outcomes - Distributed Energy. In the current investment world, investors have access to a multitude of tricks and tools to choose their investment options from, based on their risk appetite and core values. 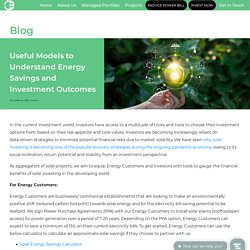 Investors are becoming increasingly reliant on data-driven strategies to minimize potential financial risks due to market volatility. We have seen why solar investing is becoming one of the popular recovery strategies during the ongoing pandemic economy, owing to its social inclination, return potential and stability from an investment perspective. Become an Energy Customer with Distributed Energy. Will The Cost Of Solar Power Electricity Be Insanely Cheap? By Ramez Naam, Non-Executive Director and Investor at Distributed Energy Solar is plunging in cost faster than anyone, including me, predicted. 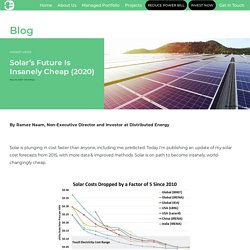 Today I’m publishing an update of my solar cost forecasts from 2015, with more data & improved methods. Solar is on path to become insanely, world-changingly cheap. Over the last decade, from 2010 – 2020, the unsubsidized cost of solar electricity from utility scale projects has dropped by a factor of 5 or more. That’s consistent in global average data, and in the US, India, & China. India’s Renewable Energy Options After COVID-19. By Ruchir Punjabi, Co-Founder, Distributed Energy I write this not long after the US Oil futures contract price was negative. 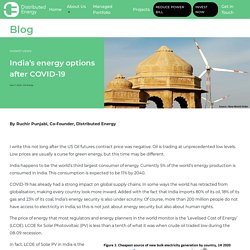 Oil is trading at unprecedented low levels. Low prices are usually a curse for green energy, but this time may be different. India happens to be the world’s third largest consumer of energy. Currently 5% of the world’s energy production is consumed in India. COVID-19 has already had a strong impact on global supply chains. The price of energy that most regulators and energy planners in the world monitor is the ‘Levelised Cost of Energy’ (LCOE). In fact, LCOE of Solar PV in India is the lowest around the world. India has set an ambitious target of 175GW of renewable energy by 2022. In 2018, for the first time, we had more renewable capacity installed than thermal and traditional sources of power. Relative to China on per capita electricity consumption, India is 4x behind; however, when it comes to generation capacity, India is nearly 5x behind.