Make a Joule thief. In the November 1999 issue of EPE (Everyday Practical Electronics), a small and intriguing circuit was published in the Ingenuity Unlimited section by Z. 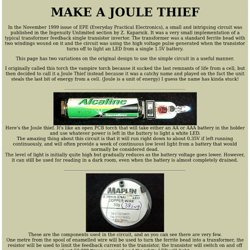 Kaparnik. It was a very small implementation of a typical transformer feedback single transistor invertor. The transformer was a standard ferrite bead with two windings wound on it and the circuit was using the high voltage pulse generated when the transistor turns off to light an LED from a single 1.5V battery. This page has two variations on the original design to use the simple circuit in a useful manner. I originally called this torch the vampire torch because it sucked the last remnants of life from a cell, but then decided to call it a Joule Thief instead because it was a catchy name and played on the fact the unit steals the last bit of energy from a cell. 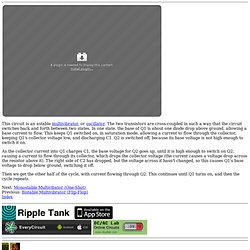 The two transistors are cross-coupled in such a way that the circuit switches back and forth between two states. In one state, the base of Q1 is about one diode drop above ground, allowing a base current to flow. This keeps Q1 switched on, in saturation mode, allowing a current to flow through the collector, keeping Q1's collector voltage low, and discharging C1. Q2 is switched off, because its base voltage is not high enough to switch it on. As the collector current into Q1 charges C1, the base voltage for Q2 goes up, until it is high enough to switch on Q2, causing a current to flow through its collector, which drops the collector voltage (the current causes a voltage drop across the resistor above it). Then we get the other half of the cycle, with current flowing through Q2. Next: Monostable Multivibator (One-Shot) Previous: Bistable Multivibrator (Flip-Flop)Index java@falstad.comGenerated Wed Apr 9 2014.

Relaxateur neon. Relaxation Oscillator. This circuit is an oscillator that generates a square wave. 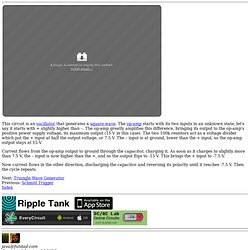 The op-amp starts with its two inputs in an unknown state; let's say it starts with + slightly higher than –. The op-amp greatly amplifies this difference, bringing its output to the op-amp's positive power supply voltage, its maximum output (15 V in this case). The two 100k resistors act as a voltage divider which put the + input at half the output voltage, or 7.5 V. The – input is at ground, lower than the + input, so the op-amp output stays at 15 V. Current flows from the op-amp output to ground through the capacitor, charging it. Now current flows in the other direction, discharging the capacitor and reversing its polarity until it reaches -7.5 V.