Free Arpeggiator Plugin By Oleg Mikheev! SQUAREDHEADS. In order to comply with Spanish Law No. 34/2002, dated 11th July 2002, concerning Computerized Information Services and Electronic Trade, SQUAREDHEADS MUSIC SOFTWARE SL informs you that it is the owner of the website www.squaredheads.com. 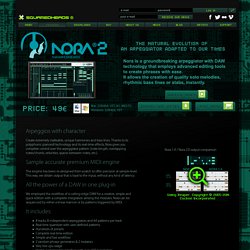 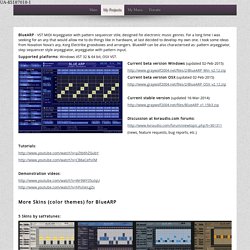 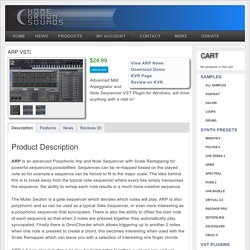 Sequences can be re-mapped based on the played note so for example a sequence can be forced to fit to the major scale. The idea behind this is to break away from the typical note sequencer where every key simply transposes the sequence, the ability to remap each note results in a much more creative sequence. The Muter Section is a gate sequencer which decides which notes will play. ARP is also polyphonic and so can be used as a typical Gate Sequencer, or even more interesting as a polyphonic sequencer that syncopates. There is also the ability to offset the start note of each sequence so that when 2 notes are pressed together they automatically play syncopated. The demo version is fully featured, but times out after 30 minutes per session. Arp-EG classic MIDI arpeggiator plug-in VST » Tek'it Audio. Arp-EG classic is a MIDI arpeggiator, play arpeggios on all your instruments. 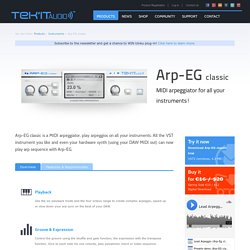 All the VST instrument you like and even your hardware synth (using your DAW MIDI out) can now play arp sequence with Arp-EG. Playback Use the six playback mode and the four octave range to create complex arpeggio, speed up or slow down your arp sync on the beat of your DAW. Groove & Expression Control the groove using the shuffle and gate function, the expression with the transpose function. Assign all the parameters to your MIDI controller easily. Random & Undo Randomly generate your arpeggio with a single click. Feature highlights Six arpeggio playback mode. System requirements 1GHz CPU or higher with SSE2.512MB RAM or higher.Microsoft® Windows® 8, 7, XP (SP2 or later), or Vista™.VST™ 2 compatible host.Sound card with ASIO driver support recommended.To use the automation a Host with automation features and for MIDI control a MIDI interface and an external MIDI control device. 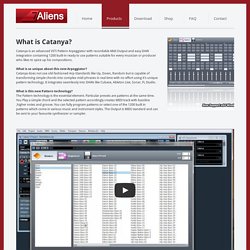 Catanya is an advanced VSTi Pattern Arpeggiator with recordable Midi Output and easy DAW integration containing 1200 built-in ready to use patterns suitable for every musician or producer who likes to spice up his compositions. What is so unique about this new Arpeggiator? Catanya does not use old-fashioned Arp-Standards like Up, Down, Random but is capable of transforming simple chords into complex midi phrases in real time with no effort using it’s unique pattern technology. It integrates seamlessly into DAWs like Cubase, Ableton Live, Sonar, FL Studio. What is this new Pattern technology? Usage. Kirnu - The Arpeggiator. Xfer Records. Cthulhu The Chord and Arp Monster VST MIDI-FX Plug-In Harmonic Inspiration, Made Easy. 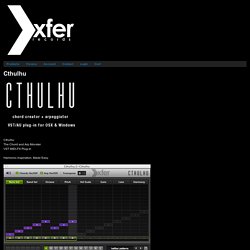 Cthulhu is two MIDI FX modules combined into one plug-in: Chords Module - One Note Becomes Many Cthulhu is firstly a chord memorizer and player, allowing you to experiment with creating and reworking chord progressions with single-note presses. Included are over 150 factory chord presets allowing for a near-unlimited amount of possible musical-sounding chord progressions. Arp Module - Transform your chords in new ways. The other half of Cthulhu is a unique pattern-based arpeggiator, allowing incoming notes or chords to be manipulated in various rhythmic ways. Here's a video demonstrating Cthulhu: System Requirements: VST or AudioUnit compatible host which supports MIDI output from VST's (e.g. Logic 9 Users: Please note, MIDI in Logic 9 requires use of the IAC Bus, since AudioUnits do not support MIDI from plugins. Instant download after purchase / digital download only Demo Version.