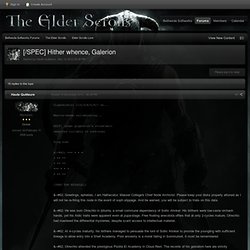 Mantra-seeds syllablating... HALT! Crown glyphdisk's storm-wallrequires lullably to continue; Sing now; > Greetings, sophumers, this is U-Masser Lexicon Node [h]2271-ALT, [Htwthcyqtar of Ullyñnr] whilst living. Spec: Hag Tales of Crag'Cwmlech - Elder Scrolls Lore. Lessons From The Old Ways of The Reachmen. Lessons From The Old Ways of The Reachmenas told by the hag sisters of Cut-Vein Creek to Quisutdeus Ioriuus (author of such beloved works as “Anywhere But Elsweyr” and “The Gospel of Dibella: lovin’ on the run”) “ Come, sit with us by the fire Southron., good, now have a drink of this. 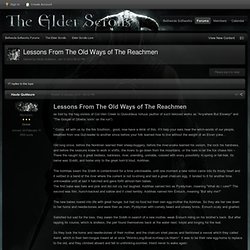 It’ll help your ears hear the witch-words of our people, breathed from one Gut-reader to another since before your folk learned how to live without the weight of an Elven yoke… Old long since, before the Nordmen learned their sheep-buggery, before the river-snake learned his venom, the rock his hardness, and before the seasons knew to work in shifts, the rivers to go down from the mountains, or the hare to let the fox chase him – There the naught by a great bedless, bankless, river, unending, unmade, colored with every possibility in spring or fall-tide. Its name was Sìddh, and home only to the great horn’d trout, Aórbhas. “ Anyway, where was I?

“Oh my father and his brother, at last you may know me. Dominion Tendrilite 6th Shell Congress, De Rerum: Descent of Nu-Mannoid. The Great Thalmor concludes perfectly. 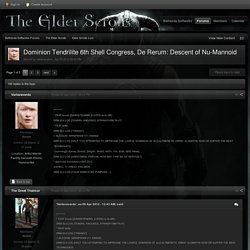 Indeed, The Count Arkmont kept her sequestered in the private hidden suite of his Alcaire-upon-Alcaire manorhouse, able to be entered only from concealed backdoor, wherein through keyhole occulance Mantis peepspied the Count’s rapturous spelyngological explorations of Ysigný’s own subtle apertures every evening before supper with his wife, the Countess, and their three legitimate sons – Eustache, Gaufre, and Ecureuilbleu. Despite her rude genesis, she was naïve and unplastic in the techniques and rigors of spastic pollination and had to be chained down by eunuchs to prevent her from kicking, feeding further into the Count’s bespoken fancies. When her stomach swelled - which Ysigný reasoned, with practiced daftreckoning, had come from all those deep mouth-tickling tongue kisses that her seigneur liked to perform on her – The Countess for fear of her adroit and salic sons, stamped her feet and demanded maractomy before term.

Dwemer Alloy is made of... - Bethesda Softworks Forums - Page 2. Pshaw, the Betrayed were worthy only of being put to work mining soul gems and Aetherium and having their souls harvested to be put to use in the soul matrices of animunculi. 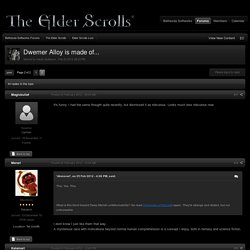 Ahem. Excerpt from 'On the Camorans' by Amiel Arbutus - Elder Scrolls Lore. Excerpt from the minutes of the Spring Conclave, Imperial Geographical Society, 3E 277: Urias Velti: It is no coincidence that these interscholastic tensions regarding the nature of Wood Elf society should arise as we near the auspicious tenth anniversary of the defeat of the Camoran Usurper. 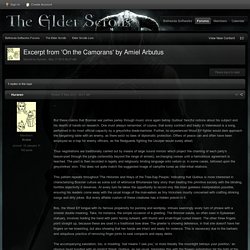 The war's many veterans, silent for many years about the horrors they had witnessed in the wildernesses and wastelands left behind by the Usurper's advance, have begun to come forward as time begins to heal their mental scars. The Empire's populace has begun to engage more fully with Valenwood again, in terms of trade and travel. The Zero-Sum Of Zhiro - Elder Scrolls Lore. I have written these letters to see how TES:O can fit with some apparent contradictions with other games. 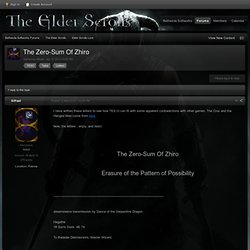 The Crux and the Hanged Man come from here. People of the Root - Elder Scrolls Lore. Argonia: Origins and Misinterpretations Imperial nativity runs rampant within the public opinion and knowledge of the history of Argonia. 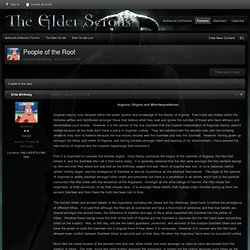 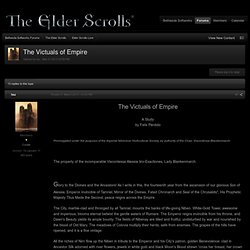 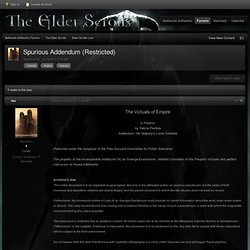 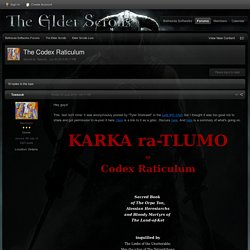 In the days when Man’s misery rankled the nose of God, it pleased the Unutterable that Leb - slave-patriarch of that city - should be afflicted with most holy augurs. Thus was set into his flesh a score of sores to weep red-lozenge worship upon the docks, for the eve of Esh was upon Ket and their shackles already trembled. This Many Goblins Left the Cave - Elder Scrolls Lore. So this one time there was these goblins in a cave. These goblins...How many goblins was there? It don't matter. Anyways, there was these goblins, okay, and so then this one goblin says...What goblin was it? It don't matter. This one goblin says "Why we don't go out the cave a second? " The Marukhati Collected (Whirling Scrolls Online) Pt IV - Bethesda Softworks Forums - Page 4. The Glass Knight. Reachwind Eyrie. The Cure for Lycanthropy: Taela's Quest. The infernal creek of the rusted door hinges alerted the temple patrons of Mara to a new presence crossing it's threshold. A cloaked figure slowly stepped in and batted an eye to the back rooms where the priests and higher ups gathered to meditate.

How do you fight with nothing instead? My Tamrielic languages. I'm a long-time conlanger and if anybody is interested, I'm currently creating/expanding most of the modern languages of Tamriel and some dead ones too for role-playing and writing purposes.

Serminuxia: The Marukhati Sermons. Mnoriad Plei Bar - Elder Scrolls Lore. On Silk. On Silk, and the Culture, History, and Economics thereof in the Nibenean Heartland. The stiff, hempen silk of the Velothi Blight Moth: too coarse to be anything but practical; the translucent, mirror-like silks of the Summurset: too costly and taking too long to sing into being; the weija of Valenwood (which, though not itself a proper silk, is often classed longside them): too hard to obtain and bearing too much indigenous connotation -- the beautiful and versatile silks of the Niben outclass them all. They are easy to produce and work with, yet fine enough for noble use. It bears and excellent capacity for enchantment -- so much so, in fact, that for a long time it was used for nothing but. Nocturne for the Falmer. -I am not bandwagon hopping, I am not bandwagon hopping, I am not bandwagon hopping. I had this mostly written before Haute published, I swear. Raid on Pyandonea - Elder Scrolls Lore.

The Hammer of Olfor - Elder Scrolls Lore. In the times of tongue-singers long ago, when Shor's ghost, terrible and beautiful, led us eastward to reclaim his heart a great number of things happened. The Wailing Weep-Song of Forgotten Erik the Atlatl. Anaximander Mergus, as an act of retribution for that dirty trick you pulled in sending me to Morrowind to catalog a particular airborne pest, I am editing this minor reference to the origins of some so-called lunarlith buried in a Nordic mead-drenched elegy, your appalling translation of the Nord text "The Wailing Weep-Song of Forgotten Erik the Atlatl", in the hopes that my own edition will supplant yours in whatever moldy crevice the Librarians shoved it.

Oh, and through some cautious verbal maneuvering in the frigid north, additions have been made, the tale has been lengthened. On Boethiah's Summoning Day - Elder Scrolls Lore. 250 Stendarr's Star1st Passing Tal Marog Ker, Hjalti Eats a Horker: a Tale of Tiber Septim. "thee HART o'thee WYDD" Ruminations on the Nature of the Et'Ada - A Fragment. The Importance in Swirls: My Time With the Maomer. Excerpt from an early 4e alchemical thesis (Firsthold, Alinor) The Under Marsh: My time with a Saxhleel Shaman. Lyrkhat. Pentannual Census of the Houses of Morrowind, Post Red-Year 4E 166. A Reading from the Book of Deepscorn Ch 1 Vs 1-14.