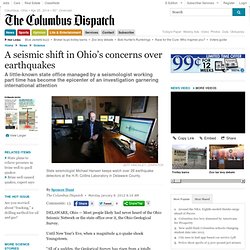 Until New Year’s Eve, when a magnitude 4.0 quake shook Youngstown. “All of a sudden, the Geological Survey has risen from a totally obscure agency to something where people know who we are,” said Michael Hansen, state seismologist. Hansen pretty much is the seismic network. The part-time state employee keeps watch over 26 earthquake detectors with an annual budget of $20,000. After the New Year’s Eve quake, his quiet office in a lab building near the city of Delaware has become the epicenter of an investigation into a string of earthquakes in the Youngstown area that’s drawn international attention. Why would such a small quake attract such a bright spotlight? Fracking. Earthquake data show a link between the earthquake and a nearby disposal well where “fracking” fluids used in oil and gas drilling sites are injected deep underground. 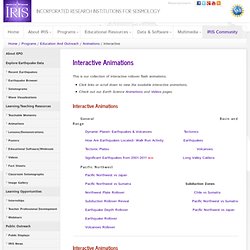 Dynamic Earth . Plate Tectonics. Radioactive Decay: The Source of Earth's Internal Heat. The Role of Heat in Earth's Interior What spreads the sea floors and moves the continents? 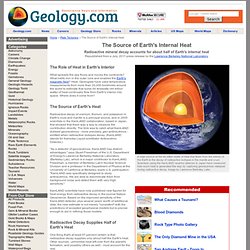 What melts iron in the outer core and enables the Earth's magnetic field? Heat. Geologists have used temperature measurements from more than 20,000 boreholes around the world to estimate that some 44 terawatts (44 trillion watts) of heat continually flow from Earth's interior into space. Where does it come from? The Source of Earth's Heat Radioactive decay of uranium, thorium, and potassium in Earth's crust and mantle is a principal source, and in 2005 scientists in the KamLAND collaboration, based in Japan, first showed that there was a way to measure the contribution directly. "As a detector of geoneutrinos, KamLAND has distinct advantages," says Stuart Freedman of the U.S. KamLAND scientists have now published new figures for heat energy from radioactive decay in the journal Nature Geoscience.

QUEST TV – Back to the Wild: Wolves, Seeds and Snapshots Track wolves from their prey’s POV, explore seed diversity, and see the Great Plains from a new angle. 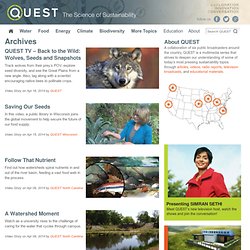 Also, tag along with a scientist encouraging native bees to pollinate crops. Continue Reading Saving Our Seeds In this video, a public library in Wisconsin joins the global movement to help secure the future of our food supply. Continue Reading Follow That Nutrient Find out how watersheds spiral nutrients in and out of the river basin, feeding a vast food web in the process. Continue Reading. Science Daily: News & Articles in Science, Health, Environment & Technology. Science news and science jobs from New Scientist. 15 Awesome Chemistry Experiments.

You don’t need to watch Breaking Bad to know that chemistry is pretty awesome. 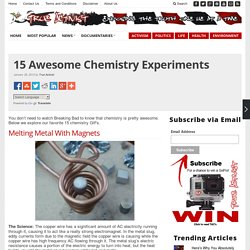 Below we explore our favorite 15 chemistry GIFs. Melting Metal With Magnets The Science: The copper wire has a significant amount of AC electricity running through it, causing it to act like a really strong electromagnet. In the metal slug, eddy currents form due to the magnetic field the copper wire is causing while the copper wire has high frequency AC flowing through it. The metal slug’s electric resistance causes a portion of the electric energy to turn into heat, but the heat builds up until the metal slug becomes white hot and melts. Orange LED Light In Liquid Nitrogen. KS3/4 Science - Banging Chemistry: Fast and Furious. KS3/4 Science - Demonstrating Chemistry: Exciting Elements Advice on carrying out some spectacular chemistry experiments Teachers TV Created: Fri Apr 28 03:11:17 BST 2006. 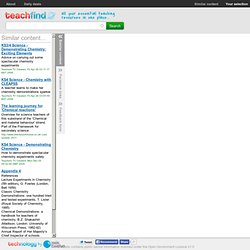