Doing Business in the UK. The United Kingdom (UK) is comprised of four countries: England, Scotland, Wales, and Northern Ireland. 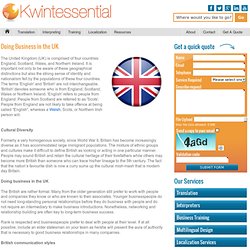 It is important not only to be aware of these geographical distinctions but also the strong sense of identity and nationalism felt by the populations of these four countries.The terms 'English' and 'British' are not interchangeable. 'British' denotes someone who is from England, Scotland, Wales or Northern Ireland. 'English' refers to people from England. People from Scotland are referred to as 'Scots'. British business culture: The United Kingdom of Great Britain & Northern Ireland (UK) 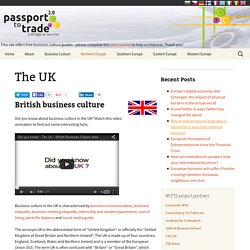 Watch this video animation to find out some interesting facts. Business culture in the UK is characterised by business communication, business etiquette, business meeting etiquette, internship and student placements, cost of living, work-life-balance and social media guide. The acronym UK is the abbreviated form of “United Kingdom” or officially the “United Kingdom of Great Britain and Northern Ireland”. The UK is made up of four countries: England, Scotland, Wales and Northern Ireland and is a member of the European Union (EU).

The UK is located in the north-western part of Europe and covers an area of 243,610 km2 (94,060 mi2). Business etiquette in the UK. Attitudes and values form the basis of any culture. 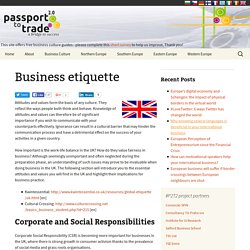 They reflect the ways people both think and behave. Knowledge of attitudes and values can therefore be of significant importance if you wish to communicate with your counterparts effectively. Ignorance can result in a cultural barrier that may hinder the communication process and have a detrimental effect on the success of your activities in a given country. How important is the work-life balance in the UK? How do they value fairness in business? Corporate and Social Responsibilities Corporate Social Responsibility (CSR) is becoming more important for businesses in the UK, where there is strong growth in consumer activism thanks to the prevalence of social media and grass roots organisations. The three main themes for CSR in the UK are work place issues (work life balance, human rights, employment); community contribution (big society/social justice) and the environment (sustainability of resources, etc). 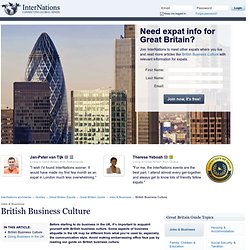 Join InterNations to meet other expats where you live and read more articles like British Business Culture with relevant information for expats. Jobs & Business Before starting to do business in the UK, it’s important to acquaint yourself with British business culture. Some aspects of business etiquette in the UK may be different from what you’re used to, especially the communication style. Avoid making embarrassing office faux pas by reading our guide on British business culture. 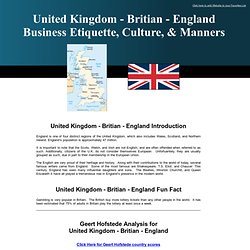 Arriving a few minutes early for safety is acceptable. Decision-making is slower in England than in the United States; therefore it is unwise to rush the English into making a decision. A simple handshake is the standard greeting (for both men and women) for business occasions and for visiting a home. Privacy is very important to the English. Therefore asking personal questions or intensely staring at another person should be avoided.

Eye contact is seldom kept during British conversations. To signal that something is to be kept confidential or secret, tap your nose. Personal space is important in England, and one should maintain a wide physical space when conversing. Giving of gifts are not required as part of doing business in England. A business lunch will often be conducted in a pub and will consist of a light meal and perhaps a pint of ale. When socializing after work hours, do not bring up the subject of work. The surprising UK work culture < Business. For anyone relocating to a new country, the different cultural values which are experienced always cause a few surprises. 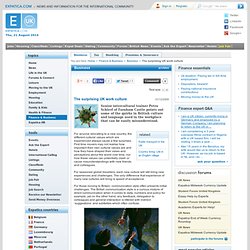 First time movers may not realise how important their own cultural values are and how they have shaped their views and perceptions about the world over time, nor how these values can potentially clash or cause misunderstandings with new friends and colleagues. For seasoned global travellers, each new culture will still bring new experiences and challenges. The only difference that experience of many new cultures will bring is speed of acceptance. For those moving to Britain, communication style often presents initial challenges. The British communication style is a curious mixture of direct communication when it comes to data, numbers and policy for example, yet on the other hand, any feedback, delegation to colleagues and general interaction is littered with indirect ‘suggestions’ and subtleties which often confuse.