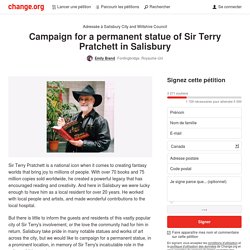 With over 70 books and 75 million copies sold worldwide, he created a powerful legacy that has encouraged reading and creativity. And here in Salisbury we were lucky enough to have him as a local resident for over 20 years. He worked with local people and artists, and made wonderful contributions to the local hospital. But there is little to inform the guests and residents of this vastly popular city of Sir Terry's involvement, or the love the community had for him in return. Salisbury take pride in many notable statues and works of art across the city, but we would like to campaign for a permanent statue, in a prominent location, in memory of Sir Terry's incalculable role in the culture of this country. Report 3 Statue of Sir Terry Pratchett.

IUPAC, Joint Institute for Nuclear Research, Lawrence Livermore National Laboratory: Name new element 117 Octarine, in honour of Terry Pratchett's Discworld. This petition is to name element 117, recently confirmed by the International Union of Applied Chemistry, as 'Octarine', with the proposed symbol Oc (pronounced 'ook'), in honour of the late Terry Pratchett and his Discworld series of books. 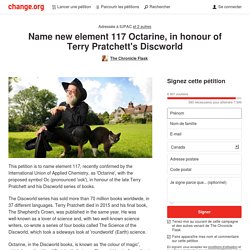 The Discworld series has sold more than 70 million books worldwide, in 37 different languages. Rhianna Pratchett plonge dans ses souvenirs. The color of magic: Terry Pratchett’s Discworld characters in LEGO. It’s time to travel to Discworld and enjoy this fantastic series of characters from the works of Sir Terry Pratchett, brought to us by Pate-keetongu (Eero Okkonen). 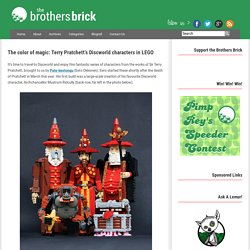 Eero started these shortly after the death of Pratchett in March this year. His first build was a large-scale creation of his favourite Discworld character, Archchancellor Mustrum Ridcully (back-row, far left in the photo below). The Archchancellor, Professor of Unusual and Cruel Geography, Dean, Librarian and The Luggage. Utopiales 2015 : The Pratchett Legacy. Octogones 2015 : Questions à Patrick Couton. Terry Pratchett en tête des ventes. Terry Pratchett's books are the opposite of 'ordinary potboilers' Like many people on Twitter, I felt the red mist descend as I read Guardian art columnist Jonathan Jones’s newly published article saying that life is too short to read a Terry Pratchett novel. 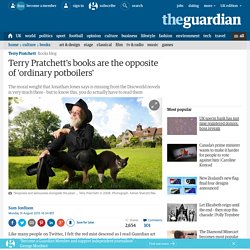 I’ve loved the Discworld books since I was nine and also spent some of my professional life carefully reading and commenting on them. But a raised eyebrow and a shoulder shrug are probably the most dignified response to Jones’s declaration that while he doesn’t intend to read a single one of Pratchett’s books, he is nonetheless sure that they’re not “actual literature” and that the late author was a “mediocrity” churning out “ordinary potboilers”. When he turned his attention to “the true delights of ambitious fiction”, though, I had to speak up. Jones writes: “This summer I finally finished Mansfield Park. Get real. Terry Pratchett is not a literary genius.

It does not matter to me if Terry Pratchett’s final novel is a worthy epitaph or not, or if he wanted it to be pulped by a steamroller. 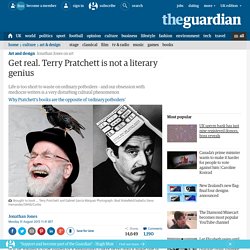 I have never read a single one of his books and I never plan to. Life’s too short. No offence, but Pratchett is so low on my list of books to read before I die that I would have to live a million years before getting round to him. I did flick through a book by him in a shop, to see what the fuss is about, but the prose seemed very ordinary. I don’t mean to pick on this particular author, except that the huge fuss attending and following his death this year is part of a very disturbing cultural phenomenon.

Actual literature may be harder to get to grips with than a Discworld novel, but it is more worth the effort. Because life really is too short to waste on ordinary potboilers. This summer I finally finished Mansfield Park. 11 Reasons Terry Pratchett Is A Literary Genius. Terry Pratchett wanted unfinished work destroyed by a steamroller. Author told his friend that his work should be 'put in middle of the road'Gaiman, Good Omens co-author, is 'ridiculously glad' that did not happenSir Terry's final novel, The Shepherd's Crown, was published yesterday66-year-old, a 'right to die' supporter, died in March after Alzheimer's battle By Steph Cockroft for MailOnline Published: 03:10 GMT, 28 August 2015 | Updated: 10:18 GMT, 28 August 2015 Terry Pratchett, whose final novel was published yesterday, wanted his unfinished work to be destroyed by a steamroller after he died, his friend has revealed. 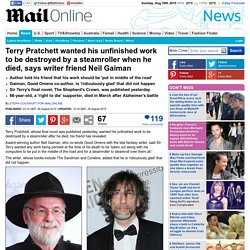 Award-winning author Neil Gaiman, who co-wrote Good Omens with the late fantasy writer, said Sir Terry wanted any work being penned at the time of his death to be 'taken out along with his computers to be put in the middle of the road and for a steamroller to steamroll over them all.' The writer, whose books include The Sandman and Coraline, added that he is 'ridiculously glad' that did not happen. VLC 2.2.1 : une mise à jour corrective diffusée par VideoLAN. Pratiquement deux mois après la sortie de VLC 2.2.0, l'association VideoLAN vient de publier cette semaine une mise à jour de son célèbre lecteur multimédia. 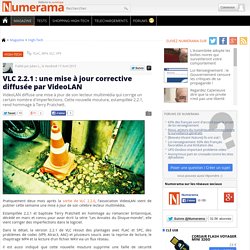 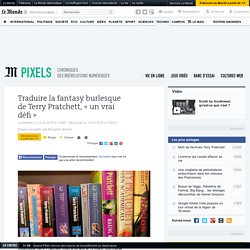 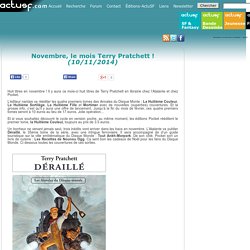 Terry Pratchett’s inspirations for Raising Steam. Terry Pratchett: how I wrote my first stories as a cub reporter. Focus on a planet revolving in space: Focus in on a small country in the northern hemisphere – Great Britain. 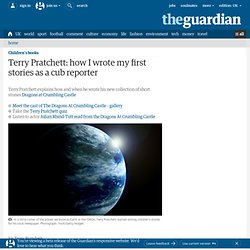 Closer, closer… and on the western edge of London you can see the county of Buckinghamshire. Small villages and winding country roads. And if you could go back in time to the mid 1960s, you might spot a young lad on a motorbike coming down one such lane, notebook and pen in his jacket pocket. This is me. It was a lot of fun back then. The stories in this collection are a selection of those. So, turn the page and read the stories that I wrote as a teenager, mostly as they were first printed, although the grown-up me has tinkered just a little with a few fine details – the odd tweak here, a pinch there, and a little note at the bottom where needed and all because the younger me wasn't as clever back then as he turned out to be.

And to imagine… Authors dress up as their favourite characters. 29 June 2014Last updated at 11:57 ET By Genevieve Hassan Entertainment reporter, BBC News Cambridge Jones dressed as fictional pilot and adventurer Biggles Photographer Cambridge Jones has collaborated with The Story Museum for its latest exhibition which celebrates childhood story heroes and sees well-known authors dress up as their favourite literary characters.

When the The Story Museum approached Cambridge Jones to take pictures for its 26 Characters exhibition, the photographer wanted images that visitors would actually stop and look at. "Just taking a bunch of authors isn't going to make people interested - and authors aren't necessarily outgoing people," he says. "So I thought what if we gave them permission to have fun by asking them who their favourite character from childhood was and let their imagination run free. " TerryPratchett’s My Independent Bookshop. Terryandrob : Yes. They're corks. Professor ... University of South Australia awards author, humanist, comedian Terry Pratchett honorary doctorate.

University of South Australia has awarded Terry Pratchett an honourary doctorate. Those of us with dementia need a little help from our friends. A few years ago, my novel Dodger took the reader back to times long gone to meet famous names of fact and fiction, and brought them together on a journey – ultimately – of chivalry. Enduring danger and peril, they chase a woman who needs saving and do their best to protect her. In the book, Dodger (who is based on Dickens's masterful portrayal of the original Artful Dodger) gets into a number of scrapes for Simplicity's sake. As a reward, we see him climb the social ladder of acceptance until, by the end of the book, he is honoured and revered.

Raising steam, de Terry Pratchett. International Sir Terry Pratchett Day - The London Book Fair. Terry Pratchett s'est forgé sa propre épée en météorite. La Science du Disque-monde : troisième acte à paraître. Locus Online Perspectives » Terry Pratchett: Talking to Other Monkeys. ‘‘I just love steam engines. Even here in Britain, if a steam train goes through the countryside, it never spoils the countryside! Oh, there’s all the stuff it’s chuffing out, but we nod that off. The old fashioned railways, the steam engines, they lived and they breathed. Indeed, the whole thing about Raising Steam is that you have the prototype, shall we say, Iron Girder, and she comes alive. There’s a scene where a thief gets in to sabotage her and a bit of his skull is later seen embedded in the roof.

‘‘I want to do another Tiffany Aching novel, too. “I want to live in a world where I go into the office and I say, ‘Put up the piece I was doing yesterday and get me Dave on the phone.’ ‘‘We haven’t talked about my Alzheimer’s.