The Digital Media Academy Homepage is your beginning to a unforgettable technology summer camp experience. 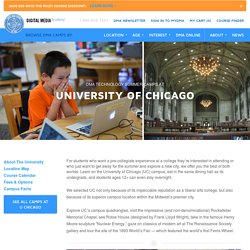 Rockefeller. Campus Size: Located in Chicago’s Hyde Park community, just seven miles from Chicago’s downtown area, at 5801 South Ellis Avenue. The heart of the 211-acre campus is found at the intersection of 58th Street and University Avenue. Scientific Discoveries: UC played a key role in several major scientific developments of the 20th century. The school’s George Herbert Jones Laboratory is where plutonium was first isolated in 1940. Influential Think-Tank: UC has been highly influential academically, giving rise to several important schools of thought. Local Attractions: Chicago is one of America’s truly great cities, and a vacation wonderland. Famous Alumni: UC graduates have distinguished themselves in many arenas and 87 Nobel laureates have been affiliated with the school. 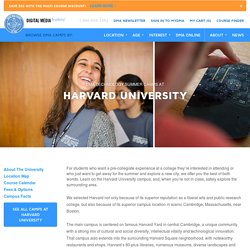 It’s also the oldest corporation in U.S. history. Campus Size: Harvard’s main campus occupies 210 acres in Cambridge, Massachusetts (and is located less than 4 miles from downtown Boston), across from the Charles River. Local Attractions: Cambridge attractions include key historical locations such as the Cambridge Common, where George Washington trained the Continental Army during the Revolutionary War. Representative buildings from that period include the Cooper-Frost-Austin House, the Hooper-Lee-Nichols House and Longfellow House (which served as one of George Washington’s wartime headquarters). Harvard attractions include Harvard Square, the Harvard Museum of Natural History, Brattle House and the Harvard Art Museum (comprising the Fogg Museum, the Busch-Reisinger Museum and the Arthur M. 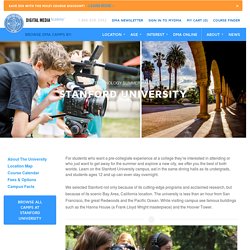 Campus Size: Situated on an 8,200-acre campus, Stanford is located 20 miles northwest of San Jose and 37 miles southeast of San Francisco — in the northwestern area of Silicon Valley. Scientific Leader: Stanford is light years ahead of other universities where scientific and technology research are concerned. Key solid-state technology research took place at Stanford in the thirty years between 1955 and 1985. By the late 1960s, the Stanford Research Institute was operating one of the original nodes that comprised ARPANET, the predecessor to the Internet.

Founded: 1912, named after the founding American businessman, William Marsh Rice Campus Size: Located in a heavily-wooded 300-acre tract of land in the museum district of Houston. 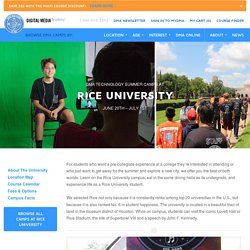 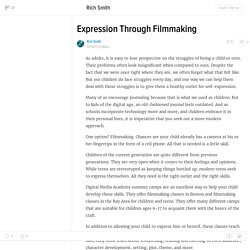 Their problems often look insignificant when compared to ours. Despite the fact that we were once right where they are, we often forget what that felt like. But our children do face struggles every day, and one way we can help them deal with those struggles is to give them a healthy outlet for self-expression. Many of us encourage journaling because that is what we used as children. But to kids of the digital age, an old-fashioned journal feels outdated. One option? Children of the current generation are quite different from previous generations. Get Started with Programming by Learning Java. Is it time to be thinking about what summer camp your child should attend? 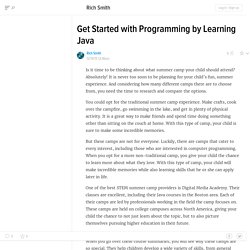 Absolutely! It is never too soon to be planning for your child’s fun, summer experience. And considering how many different camps there are to choose from, you need the time to research and compare the options. You could opt for the traditional summer camp experience. Important Women in the History of Technology. Digital Media Academy is a leader in the field of STEM education for children and teens. 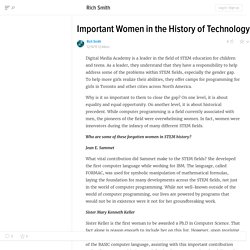 As a leader, they understand that they have a responsibility to help address some of the problems within STEM fields, especially the gender gap. To help more girls realize their abilities, they offer camps for programming for girls in Toronto and other cities across North America. Why is it so important to them to close the gap? On one level, it is about equality and equal opportunity. On another level, it is about historical precedent. Digitalmedia1.kinja. Let Your Child Learn How to Mod Their Minecraft Game. Many families struggle with their children wanting too much screen time; if your child is a Minecraft enthusiast, you probably struggle more than most. 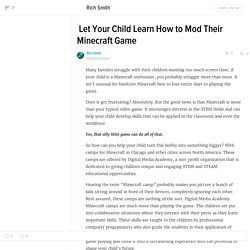 It isn’t unusual for hardcore Minecraft fans to lose entire days to playing the game. Does it get frustrating? Absolutely. Digital Media Academy, Is a Robotics Summer Camp Right for Your Child? Digitalmedia1.kinja. Are student literacy levels lower now than they were a generation ago? 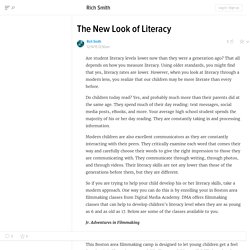 That all depends on how you measure literacy. Using older standards, you might find that yes, literacy rates are lower. However, when you look at literacy through a modern lens, you realize that our children may be more literate than every before. Java: The Most Relevant Programming Language. Kids should be free to just be kids, but that doesn’t mean that they shouldn’t be picking up skills that will help make them more successful in the future. 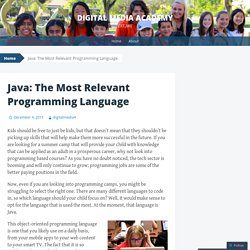 If you are looking for a summer camp that will provide your child with knowledge that can be applied as an adult in a prosperous career, why not look into programming based courses? As you have no doubt noticed, the tech sector is booming and will only continue to grow; programming jobs are some of the better paying positions in the field. Now, even if you are looking into programming camps, you might be struggling to select the right one. Learn Another Language—A Programming Language. Your child has reached the age where you think that learning a new language would be beneficial. Is a Robotics Summer Camp Right for Your Child? Does Your Child Enjoy Math? The robotics camp in Houston requires plenty of mathematical calculations in order to build and operate the robots effectively.

These calculations can be a bit challenging but they are certain to be exciting for young mathematicians. What Can Filmmaking Do for Your Child? When it comes to selecting a summer camp for your child, you want it to have certain qualities. It should be fun, otherwise your child will have no interest. Solving Problems and Crafting a Future. Summer camps are a great way to help your child relax and have fun while still staying active during their school break. It is important to keep minds and bodies active during the summer months in order to keep your children engaged and healthy. But if it is an option, why not enroll your child in a course that will help him or her engage creative thinking, work on problem solving, and develop skills that could be used to sustain themselves in the future?

How an Animation Summer Camp can Assist Your Child’s Education. When it comes to choosing a summer camp for your child, you want to find one that is fun and engaging while also being educational. One of the biggest issues with summer break is that students tend to forget so much of what they know due to the fact that they simply aren’t engaging their minds. The right summer camp can address that problem while also keeping them relaxed and happy. And the right camp is one focused on animation. How to Apply Filmmaking Lessons to Real Life. How Learning Animation Can Improve Language and Literature Skills. If you have a child who struggles with their language arts and literature classes, chances are that you have tried out all of the traditional outlets to help him or her improve. The Value of Girls Only Education.

Digital Media Academy, one of the most innovative summer camps around, is offering camps focused on programming for girls in Houston and Boston. These camps are the perfect place for girls and young women to explore this aspect of technology while feeling safe and supported. Perhaps your daughter will become inspired and go on to be one of the great, female pioneers in the technology world.

Should Your Child Learn Animation? Making Minecraft More Than Just A Hobby. A Summer Camp That Can Change Your Child’s Life. Can a Filmmaking Class Lead to More Responsible Social Media Use? With the introduction of social media, parenting got a lot more complicated. Now, parents have the duty of teaching children to use their children to use social media responsibly, even when they themselves might not fully understand the various platforms.

It is a very complex undertaking. So, how can parents encourage better use of social media? While it might be tempting to lecture, a better way to go about it is to teach your child skills that naturally lead to more responsible use. For example, much of what children do online involves the sharing of photos and videos. A Great Way to Get into Computer Programming. Why Your Child Should Learn How to Program. Take Your Minecraft Game to the Next Level. Take Your Minecraft Game to the Next Level. Digital Media Academy Java Programming Summer Camps. If your child is fascinated by all things computers and games, you should steer clear of the typical summer camp experience and opt for one of the STEM focused camps offered by Digital Media Academy.

DMA offers all sorts of different camps, making it easy to find something that works for every child. Filmmaking Gives Your Child a New Outlet for Self-Expression. While we are working hard to balance home, family, career, and more, it is easy to forget the struggles of childhood. We look back on our own lives and generally remember those years as being carefree—or, alternatively, think that the problems we agonized over were miniscule in retrospect. But the fact is that our children have their own struggles that are very real and very important to them.

The emotions they feel—especially in the tween and teen years—are deep and powerful. Children need an outlet to express these feelings. Help Your Daughter Feel Comfortable with STEM Fields (with image) · digitalmedia4. Help Your Daughter Feel Comfortable with STEM Fields (with image) · digitalmedia4. Our Daughters Can Make a Difference. Our world is in code. What Will Your Child Learn About Him or Herself at Robotics Camp? Enjoy Playing Minecraft? Learn How it is Made and Make the Most of Your Game. Opening Up a New Outlet for Self-Expression. How About a Filmmaking Summer Camp? Is a Robotics Summer Camp Right for Your Child? Enroll Your Child in a Robotics Summer Camp. Java: The Most Relevant Programming Language. Learn Another Language—A Programming Language. What Can Filmmaking Do for Your Child? Solving Problems and Crafting a Future. How an Animation Summer Camp can Assist Your Child’s Education. How to Apply Filmmaking Lessons to Real Life.

How Learning Animation Can Improve Language and Literature Skills. The Value of Girls Only Education. Get Into Animation—No Matter What Coast You Are On. Digital Storytelling to Improve Literacy Across Learning Styles. Arts in the Digital Age. Is Your Child The Future of Mobile Apps? Why You Should Learn How to Design Apps. The Gender Gap in Tech. Summer Camps to Inspire Innovation in the Next Generation. Why Get into Robotics? Pioneer Women on the Technology Frontier. Minecraft—More than a Game. Benefits to Learning Java Programming. What Can Your Child Do with Java? Educational Developments in Schools/Universities. Mobile App Development Classes in Chicago.