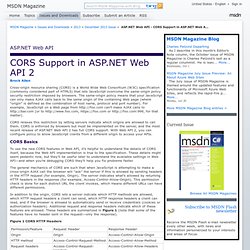 The same-origin policy means that your JavaScript can only make AJAX calls back to the same origin of the containing Web page (where “origin” is defined as the combination of host name, protocol and port number). For example, JavaScript on a Web page from can’t make AJAX calls to (or to or for that matter). CORS relaxes this restriction by letting servers indicate which origins are allowed to call them. CORS is enforced by browsers but must be implemented on the server, and the most recent release of ASP.NET Web API 2 has full CORS support. With Web API 2, you can configure policy to allow JavaScript clients from a different origin to access your APIs. ASP.NET - Getting Started with the Katana Project. When ASP.NET was first released back in 2002, times were different. 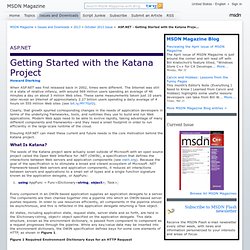 The Internet was still in a state of relative infancy, with around 569 million users spending an average of 46 minutes a day on about 3 million Web sites. These same measurements taken just 10 years later reveal an Internet of approximately 2.27 billion users spending a daily average of 4 hours on 555 million Web sites (see bit.ly/MY7GzO). Clearly, that growth spurred corresponding changes in the needs of application developers in terms of the underlying frameworks, tools, and runtimes they use to build and run Web applications.

Modern Web apps need to be able to evolve rapidly, taking advantage of many different components and frameworks—and they need a small footprint in order to run efficiently in the large-scale runtime of the cloud. Ensuring ASP.NET can meet these current and future needs is the core motivation behind the Katana project. What Is Katana? OWIN and Katana. Twilio Cloud Communications - APIs for Voice, VoIP and Text Messaging. Pricing Tropo. Timeago: a jQuery plugin. OWIN and Katana. Why do I use Tropo over Twilio? - Aaron Parecki. Many people keep asking me why I use Tropo instead of Twilio. 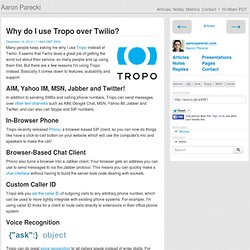 It seems that Twilio does a great job of getting the word out about their service, so many people end up using them first. But there are a few reasons I'm using Tropo instead. Basically it comes down to features, scalability and support. AIM, Yahoo IM, MSN, Jabber and Twitter! In addition to sending SMSs and calling phone numbers, Tropo can send messages over other text channels such as AIM, Google Chat, MSN, Yahoo IM, Jabber and Twitter, and can also call Skype and SIP numbers. In-Browser Phone Tropo recently released Phono, a browser-based SIP client, so you can now do things like have a click-to-call button on your website which will use the computer's mic and speakers to make the call! Browser-Based Chat Client Phono also turns a browser into a Jabber client. Custom Caller ID Voice Recognition.

Install and Deploy. HTML5. Responsive Web. CSS Preprocessors. 11 Killer Open Source Projects I Found with NuGet. So maybe I'm late to the party, but I recently started playing with NuGet. 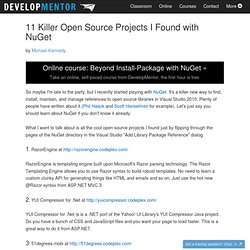 It's a killer new way to find, install, maintain, and manage references to open source libraries in Visual Studio 2010. Plenty of people have written about it (Phil Haack and Scott Hanselman for example). Let's just say you should learn about NuGet if you don't know it already. What I want to talk about is all the cool open source projects I found just by flipping through the pages of the NuGet directory in the Visual Studio "Add Library Package Reference" dialog. 1.

RazorEngine is templating engine built upon Microsoft's Razor parsing technology. 2. YUI Compressor for .Net is is a .NET port of the Yahoo! NCrunch for Visual Studio extension. Sign in to write a review Sort by: It's fantastic for TDD and BDD too! 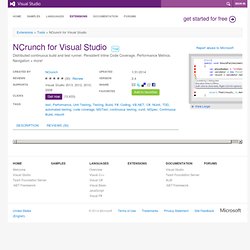 Great job! NCrunch = BrilliantIdea + BrilliantImplementation. `Must have` add-in for TDD-guys :) Must have extension. By ahopp | October 24 2012 Once you've used it, you'll hate working with tests in Visual Studio without it. This tool is simply FANTASTIC! NuGet Package Template - EyeCatch. Easily create NuGet packages with this template. 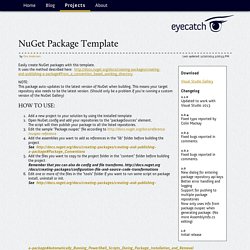 It uses the method described here: NOTE: This package auto-updates to the latest version of NuGet when building. This means your target repository also needs to be the latest version. (Should only be a problem if you're running a custom version of the NuGet Gallery) Add a new project to your solution by using the installed template Open NuGet.config and add your repositories to the "packageSources" element. If there are .pdb files located in the lib folder, a symbols package will automatically be made and published together with the package. Make sure all the files you want to include in the package are present in the "lib", "content" and "tools" folders before building the NuGet Packager project.