DigiStatement is an authoritative platform for all the latest technology and gaming news.

Rog Phone 3 list of games which supports over 60 fps gameplay. Due to the wonderful success of the Rog Phone 2, the company unveiled its new phone Rog Phone 3, in July this year. 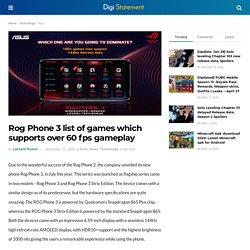 This series was launched as flagship series came in two models – Rog Phone 3 and Rog Phone 3 Strix Edition. The device comes with a similar design as of its predecessor, but the hardware specifications are quite amazing. The ROG Phone 3 is powered by Qualcomm’s Snapdragon 865 Plus chip, whereas the ROG Phone 3 Strix Edition is powered by the standard Snapdragon 865. Both the devices come with an impressive 6.59-inch display with a seamless 144Hz high refresh rate AMOLED display, with HDR10+ support and the highest brightness of 1000 nits giving the users a remarkable experience while using the phone.

But, in order to get the most out of the device’s 144Hz display, the game developers should surely enable support for higher refresh rates. Rog Phone 3 – List of games to support above 60fps: Action: GIGABYTE GeForce RTX 3070 officially flashed. The graphics card space is enjoying a vivid spell of continuous spotlight ever since NVIDIA’s Ampere line debuted. 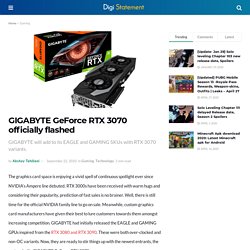 RTX 3000s have been received with warm hugs and considering their popularity, prediction of fast sales is no brainer. Well, there is still time for the official NVIDIA family line to go on sale. Meanwhile, custom graphics card manufacturers have given their best to lure customers towards them amongst increasing competition. GIGABYTE had initially released the EAGLE and GAMING GPUs inspired from the RTX 3080 and RTX 3090. Over 10,000 people pre-order Realme Narzo 20A. Realme is into some amazing stuff this year but who knew that the brand’s fan base has grown this massively. 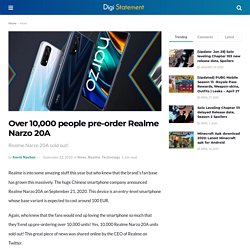 The huge Chinese smartphone company announced Realme Narzo 20A on September 21, 2020. This device is an entry-level smartphone whose base variant is expected to cost around 100 EUR. Again, who knew that the fans would end up loving the smartphone so much that they’ll end up pre-ordering over 10,000 units! Here's how to watch & stream IPL 2020 live online for free. IPL 2020 is finally here, and the excitement has hit different levels at this point. 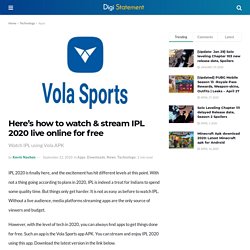 With not a thing going according to plans in 2020, IPL is indeed a treat for Indians to spend some quality time. But things only get harder. It is not as easy as before to watch IPL. Without a live audience, media platforms streaming apps are the only source of viewers and budget. Android 11 based Realme UI 2.0 update schedule revealed. Today, i.e., 21 September 2020, Realme launched its upcoming budget phones – The Narzo 20 series. 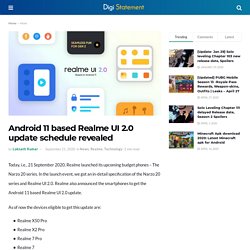 In the launch event, we got an in-detail specification of the Narzo 20 series and Realme UI 2.0. Realme also announced the smartphones to get the Android 11 based Realme UI 2.0 update. The RX 6000 Navi GPU will feature 16GB of VRAM. Over the past few years, the resurgence of AMD in the desktop CPU segment has been cause for great excitement among the enthusiast crowd. 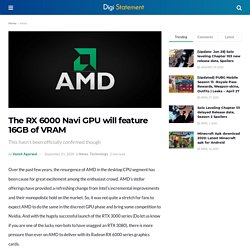 AMD’s stellar offerings have provided a refreshing change from Intel’s incremental improvements and their monopolistic hold on the market. So, it was not quite a stretch for fans to expect AMD to do the same in the discreet GPU phase and bring some competition to Nvidia. And with the hugely successful launch of the RTX 3000 series (Do let us know if you are one of the lucky non-bots to have snagged an RTX 3080), there is more pressure than ever on AMD to deliver with its Radeon RX 6000 series graphics cards. With the launch date inching ever closer, there has been a steady release of leaks and rumour to keep us busy. AMD has already unveiled the design of its RX 6000 series and to be honest, it does look like a mean piece of tech. His tweet has revealed the memory configurations for two Navi 2X GPUs based on the RDNA 2 architecture. Huawei Mate 40 series to launch in Mid October.

Huawei is all set to launch its new flagship the Mate 40 series. 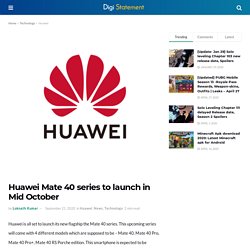 This upcoming series will come with 4 different models which are supposed to be – Mate 40, Mate 40 Pro, Mate 40 Pro+, Mate 40 RS Porche edition. This smartphone is expected to be released globally in the mid of October, whereas in China the phones will be available by the end of October. Similar to its predecessors, this phone will not have Google Apps and services due to the US Trade ban. However, you can use Huawei’s App Gallery to download the apps. But, you cannot download Whatsapp or Facebook from the App Gallery, you will be redirected to another page to download those apps. Watch Dream 11 IPL 2020 for FREE on Mobile & Android TV. There is little doubt that the year 2020 has been spent in a state of denial. 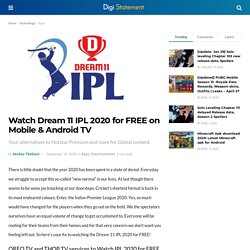 Everyday we struggle to accept this so-called “new normal” in our lives. Amazfit Band 5 now available as an improved and enhanced Mi Band 5. Huami has announced a new fitness tracker, Amazfit Band 5. 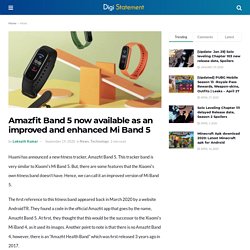 This tracker band is very similar to Xiaomi’s Mi Band 5. But, there are some features that the Xiaomi’s own fitness band doesn’t have. Hence, we can call it an improved version of Mi Band 5. The first reference to this fitness band appeared back in March 2020 by a website AndroidTR. They found a code in the official Amazfit app that goes by the name, Amazfit Band 5. Gigabyte and GeForce to launch RTX 3080 Vision OC. Well, well, isn’t this the best time to witness a massive collaboration between two huge hardware manufacturers in the tech world! 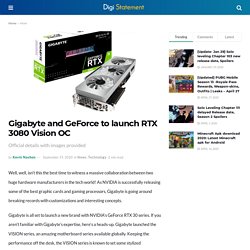 As NVIDIA is successfully releasing some of the best graphic cards and gaming processors, Gigabyte is going around breaking records with customizations and interesting concepts. The Frenchmen Are Desperate For Niko. Niko ‘NiKo’ Kovac is a Counter-Strike: Global Offensive Bosnian prodigy. Despite being one of the best players in the world and playing for one of the world’s best clan, Niko’s career graph is not at the top anymore. Faze is flooded with constant losses in this era of online games due to the pandemic and the critics have said that the language barrier in faze is the major reason for it. Realme 2.0 based on Android 11 to launch with Narzo 20 series.

Earlier, Realme gave out a list of devices which was expected to get the Android 11 update. NVIDIA GeForce RTX 3080 available on Dell. NVIDIA GeForce RTX 3080 available on Dell. You Might See COD Warzone On Mobile Soon! Activision has been giving hints from time to time about the appearance of their classic battle royale Call of Duty Warzone on mobile devices and it seems that it might really happen! Although any official confirmation is yet to be done but leaks confirm that there might be a battle royale version for the mobile device which would have advanced graphics and better mechanism.

As we know that Activision has always been loyal to and has always bowed down to their users and community. That is why we can see that the Call of Duty franchise has so many options to offer and cater to the audience of the digital era. As we all know post the hit of Player Unknowns Battleground Mobile hit its turf they launched Call of duty Mobile and served as a good competition to them. Modern Warfare: What's Season 6 bringing to the table? There has been a massive confusion about season 6 of Modern Warfare. Time to time leaks and rumours have told that there is not going to be a season 6.

Since the release of season 5 reloaded some glimpses have been given away that what can we expect in the latest season. But Modern Warfare has always been sneaky about its new updates and releases as we can see much unreleased content of the game in the library of its program files. A glimpse of Intel DG2 leaked with 8GB DDR6 memory. It was just a day ago when we saw a leaked photo of Intel’s upcoming mobile processor, Tiger Lake-H, and today we have another news about the upcoming GPU. A new gossip came rising today as a picture of an unreleased GPU Intel DG2 with a large 8GB DDR6 memory got into the list of specifications of an unknown device.

Looking at the specs, the device may be a high-end mobile device or any gaming notebook PC. Considering the fact that, yesterday there was some news about Tiger-Lake-H processors (45W mobile CPUs) with up-to 8-cores, this latest news makes us get an idea of Intel’s future plan. The leaked 8GB version of the DG2 could hold 512 EUs featuring a 256-bit memory interface.

Intel Graphics Driver 27.20.100.8681 out for download. Intel is an American multinational tech company. Every PC user would have come across the name Intel. Havoc-OS v3.9 released: Here are the changelog and other details. Havoc-OS is a custom ROM and open-source software based on Android OS. How to play Call of Duty Black Ops Cold War Open Alpha on Console. Google Meet Hardware Series 1 officially announced: Here are all the details. Google officially announced Google Meet Hardware Series 1 yesterday (September 15, 2020). The announcement was made on several social media platforms, starting with the tweet from Google’s Product Manager. Red Dead New Update for PC-15th September. Google Home Mini fails to respond to users on the first attempt every time. AMD Radeon RX 6000 new pics leaked again on Twitter. Just yesterday, AMD on its twitter platform revealed the design of the Radeon RX 6000, but they only shared one image which was not enough to satisfy our curiosity.

OnePlus Red Cable Club Privé is Live Now for users. OnePlus debuted to fame with the launch of OnePlus 3 back in 2016. Since then, OnePlus is associated with their red and white cable designs. Pokemon Go: Mega Battle Challenge- A Complete Guide. List of Sony Xperia devices eligible for Android 11 leaks on Weibo. League of Legends: Cloud Drake Bug reveal by Vandiril. List of Samsung Devices to get Android 11 update (OneUI 3.0) List of Samsung Devices to get Android 11 update (OneUI 3.0) Google Duo now available on Android TV in beta. Best Buy now has notification options for the 3080 and 3090. The parent company of PUBG mobile is working to ensure its apps continue to be available in India. YouTube web receives YouTube Music in-app icon. Honor 9S Prime receives ECC certification. August 2020 security update out for Mi Note 10 Pro [Download Here]