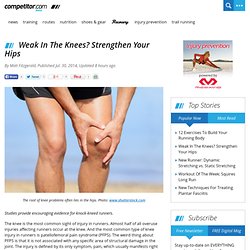 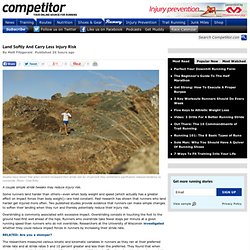 Some runners land harder than others—even when body weight and speed (which actually has a greater effect on impact forces than body weight)—are held constant. Past research has shown that runners who land harder get injured more often. Two published studies provide evidence that runners can make simple changes to soften their landing when they run and thereby potentially reduce their injury risk. Overstriding is commonly associated with excessive impact. 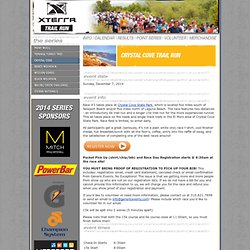 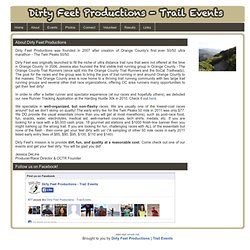 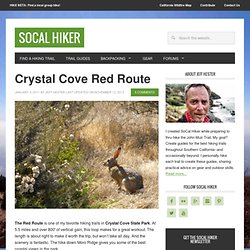 At 5.5 miles and over 800′ of vertical gain, this loop makes for a great workout. The length is about right to make it worth the trip, but won’t take all day. Why most hamstring exercises don't work for running. Posted On Wednesday, 30th November 2011 by James Marshall. 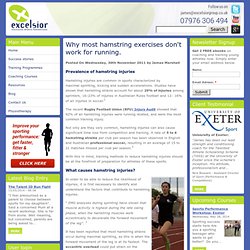 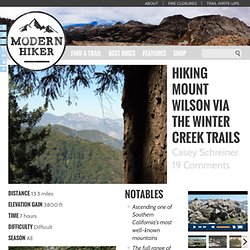 This leg-busting, bush-whacking route is just one of the 5 Sierra Club-recognized summit paths. There are more ways to climb this mountain than any other in the San Gabriels. Mount Wilson is a mountain that almost everyone in Southern California knows. Hiking Mt. Wilson via Chantry Flats. Standing prominently above Pasadena, Mount Wilson is a Southern California landmark. 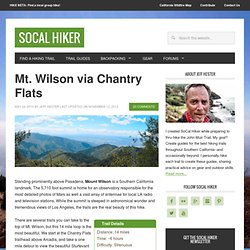 The 5,710 foot summit is home for an observatory responsible for the most detailed photos of Mars as well a vast array of antennae for local LA radio and television stations. While the summit is steeped in astronomical wonder and tremendous views of Los Angeles, the trails are the real beauty of this hike. Trail Details. Dan's Hiking Pages: Sturtevant Falls. Sturtevant FallsBig Santa Anita Canyon / Via Chantry FlatAngeles National Forest / Southern California In the heart of Big Santa Anita Canyon, beautiful Sturtevant Falls with its 50 feet of cascading water attracts thousands of visitors a year. 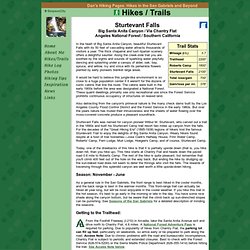 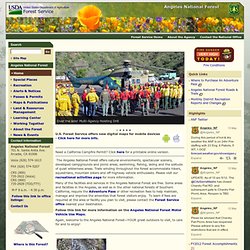 Dan's Hiking Pages: Introducing Mt. Baldy. Mount Baldy (Mt. San Antonio) (10,064') Angeles National Forest - San Bernardino National Forest / Southern California Introducing Mt. Baldy Description of the mountain Summaries of the four routes Description of the views from the summit. A Runner's Guide To Conquering The Grand Canyon. A quick primer of tips on how to run Rim to Rim to Rim. Running the Grand Canyon is an amazing adventure, one that every trail runner should put on their must-do bucket list of adventures. But, runner beware, it is an extremely difficult task, no matter if your goal is to run across once or take on the challenge of running from the South Rim to the North Rim and back to the South Rim in single day. Ultramarathon and Trail Running News - iRunFar.com. Case Study: Avoid Spinal Fusion Surgery and Return To RunningPost Injury Running Blog. “Tina,” a 35 year old lifelong runner and mother of two elementary school children, lived a full, busy life until she had an awkward lift during a weight training session.

She came to me with worsening low back pain and progressively worsening pain down her leg 8 months after that session. She prevously had two neurosurgical consults and was told that she had a herniated disc with instability in her spine. The neurosurgeons told her she would require spinal fusion surgery and should never run again. She asked the second surgeon if she could first try physical therapy. The 25 Best Trail Runs in America, By Scott Boulbol, Kate Davis, Brian Metzler, and Ty Stevens Trails are as different and individual as the humans who run them. Some are in extraordinary settings, others exist as snaking oases in the midst of urban sprawl. Marshall Canyon Trail - California Trails. Gait 101: Learning to Run More Naturally.

By Dr. Phil Maffetone. Many beginning runners remark about how much they enjoy the new experience. They care little about the nuances regarding form, technique, or proper gait. Customer Reviews: The Cool Impossible: The Coach from "Born to Run" Shows How to Get the Most from Your Miles-And From Yourself. (1) Facebook. Home. Dirty Feet Productions - Trail Events.

2013Entry INFO - WTRS. Baz's famous Winter Trail Run Series starts each year off with four shorter trail runs in the Cleveland National Forest, close to San Juan Capistrano, CA. Training Plans, Training Schedules, and Running Programs for the Marathon, Half Marathon, 10k and 5k : Runners Connect. Why Does Body Temperature Increase During Exercise? Vigorous exercise boosts your body's heat production and can increase your body temperature by several degrees. Your working muscles are responsible for the increase in heat production, but your body's ability to retain or dissipate heat and your external environment also play a role in how high your core temperature rises during your workout.

Optimum Temperature for Elite Running Performance. Optimum Temperature for Elite Running Performance. Hot Weather Running. Posted Monday, 5 June, 2006 First, the bad news: When the temperature rises about 55 degrees F (10 degrees C), you’re going to run more slowly and feel worse than you will at lower temperatures. But by gradually preparing yourself for increased temperatures and taking action from the beginning of hot weather runs, you’ll get a welcome dose of the good news. Push or Pull? A Look at Running Propulsion. Marshall Canyon Trail - California Trails. How to manage blisters between toes - Interdigital Blisters. Foot Blisters - The Game Has Changed With ENGO Blister Prevention Patches.