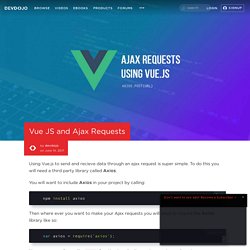 To do this you will need a third party library called Axios. You will want to include Axios in your project by calling: npm install axios Then where ever you want to make your Ajax requests you will need to require the Axios library like so: var axios = require('axios'); Now we can easily use the axios function to submit a post request anywhere in our application: Mission-4. Posted on September 05, 2017 Vue.js Vuex Laravel Setting up Vuex in a Laravel project can seem complicated as it is super easy to forget something and cause your app to blow up. 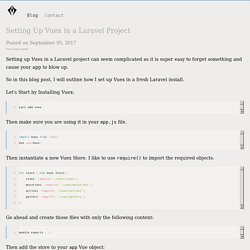 Vue.js 2 Component Framework. A Comparison of Vue.js Frontend Frameworks. With the surge of popularity of Vue.js over the past year, a multitude of Vue-specific front end frameworks have appeared on the scene. 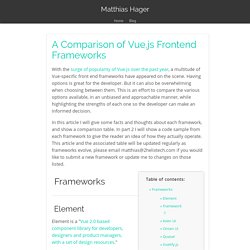 Having options is great for the developer. But it can also be overwhelming when choosing between them. This is an effort to compare the various options available, in an unbiased and approachable manner, while highlighting the strengths of each one so the developer can make an informed decision. In this article I will give some facts and thoughts about each framework, and show a comparison table. In part 2 I will show a code sample from each framework to give the reader an idea of how they actually operate. Keen UI v1.0 for Vue 2 released - Vue.js Feed. Keen-UI A lightweight collection of essential UI components written with Vue and inspired by Material Design. 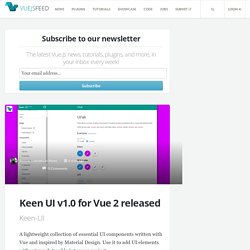 Use it to add UI elements without much trouble into your project. Installation NPM (recommended) Introduction — Vue.js. What is Vue.js? Vue (pronounced /vjuː/, like view) is a progressive framework for building user interfaces. Unlike other monolithic frameworks, Vue is designed from the ground up to be incrementally adoptable. The core library is focused on the view layer only, and is easy to pick up and integrate with other libraries or existing projects.

On the other hand, Vue is also perfectly capable of powering sophisticated Single-Page Applications when used in combination with modern tooling and supporting libraries. If you’d like to learn more about Vue before diving in, we created a video walking through the core principles and a sample project. If you are an experienced frontend developer and want to know how Vue compares to other libraries/frameworks, check out the Comparison with Other Frameworks. Intro to Vue.js: Rendering, Directives, and Events. By Sarah Drasner On directives, events, JavaScript, vue If I was going to sum up my experiences with Vue in a sentence, I'd probably say something like "it's just so reasonable" or "It gives me the tools I want when I want them, and never gets in my way". 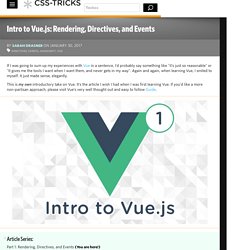 Again and again, when learning Vue, I smiled to myself. It just made sense, elegantly. This is my own introductory take on Vue. It's the article I wish I had when I was first learning Vue. #Article Series: Upload files via Droply Dropzone wrapper for Vue.js 2 - Vue.js Feed. Droply Upload files by dropping or selecting them to the upload box, using the Droply component, a Dropzone wrapper for Vue 2. 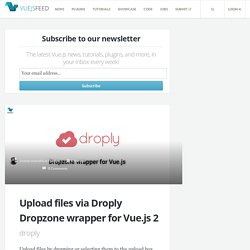 Installation This is a recommended way of installation. You can use either npm or yarn package manager: $ yarn add droply --dev. Intro to Vue.js: Five part series on Vue.js - Vue.js Feed. Intro to Vue.js Series on CSS-Tricks Sarah Drasner has written a five-part tutorial series, Intro to Vue.js, to share knowledge and experience: If I was going, to sum up my experiences with Vue in a sentence, I’d probably say something like “it’s just so reasonable” or “It gives me the tools I want when I want them, and never gets in my way”. 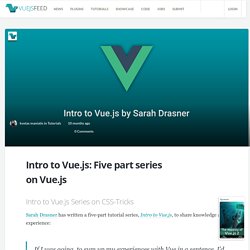 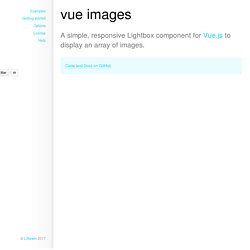 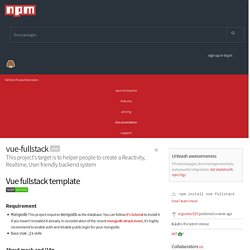 Requirement Mongodb This project requires mongodb as the database. You can follow it's tutorial to install it if you haven't installed it already. In consideration of the recent mongodb attack event, it's highly recommend to enable auth and disable public login for your mongodb.Basic vue.js skills About mock and i18n If you chose to use mock server or not use i18n at project initialization, you need to take a look at this description, else you can skip this step. Vodal: Vue.js modals with animations - Vue.js Feed. Vodal modals Vodal is providing modals for your apps with many animation styles. 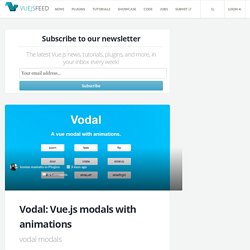 It is based on a React project, with similar functionality though easier implementation. Installation. Vodal. Vue password: realistic password strength estimator - Vue.js Feed. Vue-password-strength-meter Interactive password strength meter based on zxcvbn for Vue.js. Import it in your project as a Vue component, and use props to customize it. Install. [2017] Vue.js in less than 30 minutes for beginners - Tutorial - 2.0.

Vue Comps v0.1.0.   Google Developers. Documentation for Responsive Email Patterns - MJML. MJML is a markup language designed to reduce the pain of coding a responsive email. Its semantic syntax makes it easy and straightforward and its rich standard components library speeds up your development time and lightens your email codebase. MJML’s open-source engine generates high quality responsive HTML compliant with best practices. Overview MJML rolls up all of what Mailjet has learned about HTML email design over the past few years and abstracts the whole layer of complexity related to responsive email design.

Get your speed and productivity boosted with MJML’s semantic syntax. MJML App. Front-end Tools: My Favorite Finds of 2016. Another year has passed and, as we all expected, the Web Platform is continuing to explode with innovation, irritation, fatigue, and a huge influx of new tools and technologies that promise to make our lives as developers easier. As usual, we’ve seen updates to popular tools like React and Angular, while new tools like Vue.js have come on the scene and quickly scooped up a large amount of interest.

As many of you know, because I curate a weekly newsletter that focuses on tools, I come across a preposterous amount of things in my research. Naturally, I give some attention to the popular stuff. But I also appreciate some of the lesser-noticed things that are both interesting and practical. So, just like I did last year, in this article I’ll describe some of my favorite finds of the year in the area of tools for front-end developers. Pricing - Stormpath User Identity API. Vuejs/vue-devtools: Chrome devtools extension for debugging Vue.js applications. Vuejs/vue-cli: Simple CLI for scaffolding Vue.js projects. Getting up and Running with the Vue.js 2.0 Framework. This article is by guest author Jack Franklin.

SitePoint guest posts aim to bring you engaging content from prominent writers and speakers of the Web community Back in September, the popular JavaScript framework Vue.js released v2 and ever since I’ve been really eager to give it a spin and see what it’s like to work with. As someone who’s pretty familiar with Angular and React, I was looking forward to seeing the similarities and differences between them and Vue. Vue.js 2.0 sports excellent performance stats, a relatively small payload (the bundled runtime version of Vue weighs in at 16kb once minified and gzipped), along with updates to companion libraries like vue-router and vuex, the state management library for Vue. There’s far too much to cover in just one article, but keep an eye out for a later article where we’ll look more closely at some of the libraries that couple nicely with the core framework. Inspiration from Other Libraries Components, Components, Components.

Book. Ajax. Vuejs feed. Vuedo. Vue.js Resources Archive - Vue.js Feed. Peeking into Vue.js 2. Peeking into Vue.js 2. The warning we get now when we try to change the quantity, is: [Vue warn]: Avoid mutating a prop directly since the value will be overwritten whenever the parent component re-renders. Instead, use a data or computed property based on the prop’s value. Prop being mutated: “gems” (found in component: <cart>) That is because, in Vue 2, mutating a prop locally is considered an anti-pattern. Due to the new rendering mechanism, whenever the parent component re-renders, the child component’s local changes will be overwritten.

In object-oriented and functional programming, an immutable object is an object whose state cannot be modified after it is created. So, instead of updating the ‘quantity ’ prop and syncing it with parent’s, we will make our component submit an event to the parent. Evan is creating Vue.js. Vue 2.0 is Here! – The Vue Point – Medium. What’s New in 2.0 Performance The rendering layer has been rewritten using a light-weight Virtual DOM implementation forked from snabbdom. On top of that, Vue’s template compiler is able to apply some smart optimizations during compilation, such as analyzing and hoisting static sub trees to avoid unnecessary diffing on re-render.

As I’ve proceeded, I’ve found it is a little easier to just start some mini projects from scratch to test out some of the new functionality, as opposed to trying to reason about how to rewrite old code. In fact, when you work with Vuex, some of the new ways of working either completely eliminate the need for some old code, or reduce the footprint rather dramatically. Anyway, I put together a little app to make use of some of the new functionality, and to show off a couple patterns that answer a few of common questions I’ve seen around the web (many of which are release agnostic, as they’ve been around since 0.8, or earlier). If you want the code, it’s on GitHub. GitHub - madskristensen/VuePack.

Vue.js Pens - a Collection by Christophor Wilson on CodePen. Vue.js CRUD application. Exploring Vue.js - Why choose Vue.js for your next app. - Vue.js Feed. 00 of 04 - Building a map dragger using Vue.js 2.0 + Vuex - Introduction. Laravel JWT Auth with Vue.js – JimFrenette.com. Vue.js todo list. Single-page Forum App: Frontend. GitHub - BosNaufal/vue-simple-pwa: Simple Progressive Web App Built with Vue Js. Vue Simple PWA. Countdown Timer using Vue.js - Vue.js Feed. Guide: How to use Vue.js with jQuery Plugins – Christian Gambardella. Working with Vue can be awesome. But you might know that it can also give you headaches, when you try to combine it with jQuery plugins or other libraries. The problem is that jQuery works fundamentally different than Vue. Vue renders everything based of the component’s core data. jQuery is mostly meant to do simple click handling and has powerful abilities manipulate the DOM.

When I looked for help myself I have found some unsatisfying solutions where components did do all the initialization work. Quasar Framework. Vue.js. Learning Vue 1.0: Step By Step. The Vue Instance - vue.js. Constructor.